Thanks to the Elder: 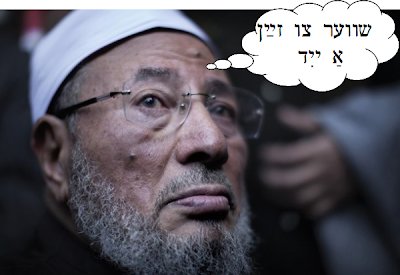 Why, it is our favouriteÂ antisemiteÂ and popularÂ TV preacher, Sheikh Yussuf Qaradawi!

According to aÂ pro-Shiite newspaper, “research” has shown that Qaradawi’s family came from an area where

Jews of the Bani Qurayza tribe had fled from Arabia to Egypt. His grandfather practiced usury, just like the Jews, and gouged farmers with high interest loans. He would confer with Jewish rabbis on how to do his immoral money lending business. In other words, while they don’t want to say it explicitly, Qaradawi is of obvious Jewish descent!

Qaradawi hadÂ called for jihadÂ against Syria and Hezbollah, which pretty much explains this whole accusation.
.
Meanwhile, back in Egypt, the military gov’t hits the MuBro’s where it hurts the most:
.

The Brotherhood will survive this crackdown because it will continue to gain adherents by claiming Islamic authenticity.

“Egypt seizes Brotherhood, Islamist leaders’ assets,” by Maggie Michael for theÂ Associated Press, December 31, 2013 (thanks to all who sent this in):

CAIRO (AP) â€” Egypt’s interim government has ordered the assets of more than 500 Muslim Brotherhood and Islamist leaders seized – including those of the country’s ousted president â€” as part of an ever-tightening crackdown on the group, senior judicial and security officials said Tuesday.

One thought on “Yussuf, you Jew!”