A direct result of Mohammedanism in Japan. There are few, Â if any, Â Japanese who’d just go out on their own to tear up Anne Frank books in public libraries. However, police in Japan is quite efficient, so there is hope that the perps behind this can soon be brought to justice.

Links from EoZ and BCF: 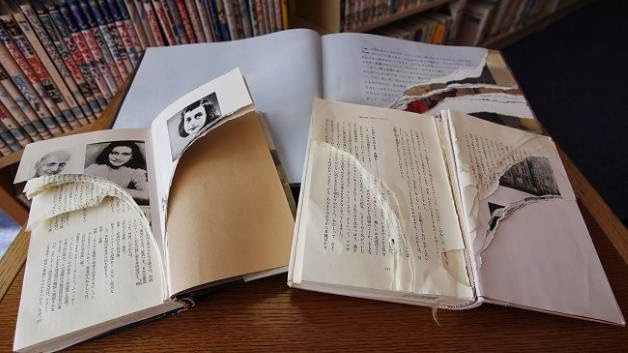 Japanese police are investigating after dozens of copies of Anne Frank’s The Diary of a Young Girl and scores of books about the young Holocaust victim were vandalised in Tokyo public libraries.

The damage was mostly in the form of dozens of ripped pages in the books. Librarians have counted at least 265 damaged books at 31 municipal libraries since the end of January.

Jew-hating Arabs have managed to make a big deal over Jews peacefully visiting and praying in their holiest sites on the Temple Mount, the Kotel, the Tomb of Joseph and the Maarat HaMachpela. In each case the Muslims claim that these holy sites are really Islamic, and that the Jews are “usurping” them.

No human rights NGO has ever pushed back and said that Jews have the right to worship in their holy spots.

Why Palestinians have to accept the Holocaust as truth? asks editor of Canadian Meshwar Newspaper and a board member of the ‘Palestine House’

Genocidal Jew-hatred arrives with the mental baggage of muselmanic invaders. You can have multinational migration to quite a large extend, but the moment you have large numbers of Mohammedans in the country the atmosphere becomes poisoned.