The original Visigothic Church of St. Vincent, then Mosque of Cordoba, now Cathedral of Our Lady of the Assumption

Reinhart Dozy Â (1820-1883), theÂ great Orientalist scholar and IslamophileÂ (i.e., by any objective standard, notwithstanding Ghosh’s uncontrolled spraying of the ridiculous charge of “Islamophobia”), wrote a four volume magnum opus (published in 1861 and translated into English by Francis Griffin Stokes in 1913), “Histoire des Musselmans d’Espagne” [“A History of the Muslims in Spain”]. Pace Ghosh’s distorted reportage, here is Dozy’s historical account of the mid-8thcentury “conversion” of a Cordovan cathedral to a mosque:

All the churches in that city [Cordova] had been destroyed except the cathedral, dedicated to Saint Vincent,Â but the possession of this fane [church or temple] had been guaranteed by treaty. For several years the treaty was observed; but when the population of Cordova was increased by the arrival of Syrian Arabs [i.e., Muslims], the mosques did not provide sufficient accommodation for the newcomers, and the Syrians considered it would be well for them to adopt the plan which had been carried out at Damascus, Emesa [Homs], and other towns in their own country,Â of appropriating half of the cathedral and using it as a mosque. The [Muslim] Government having approved of the scheme, the ChristiansÂ were compelledÂ to hand over half of the edifice.Â This was clearly an act of spoliation, as well as an infraction of the treaty. Some years later, Abd-er Rahman I [i.e., the “Muslim prince” in Ghosh’s redacted narrative] requested the Christians to sell him the other half.Â This they firmly refused to do, pointing out that if they did so they would not possess a single place of worship. Abd-er Rahman, however, insisted, and a bargain was struckÂ by which the Christians ceded their cathedral….

Indeed by the end of the eighth century, the brutal Muslim jihad conquest of North Africa and of Andalusia had imposed rigorous Maliki jurisprudence as the predominant school of Muslim law. Thus, as Evariste LÃ©vi-ProvenÃ§al (1894-1956)â€”the greatest modern scholar of Muslim Spain whoseÂ Histoire de l’Espagne MusulmaneÂ remains a defining workâ€”observed three quarters of a century ago

The Muslim Andalusian state thus appears from its earliest origins as the defender and champion of a jealous orthodoxy, more and more ossified in a blind respect for a rigid doctrine, suspecting and condemning in advance the least effort of rational speculation.

For example, the contemporary scholar J.M. Safran discusses an early codification of the rules of the marketplace (where Muslims and non-Muslims would be most likely to interact), written by al-Kinani (d. 901), a student of the Cordovan jurist Ibn Habib (d. 853), “..known as the scholar of SpainÂ par excellence,” who was also one of the most ardent proponents of Maliki doctrine in Muslim Spain:

…the problem arises of “the Jew or Christian who is discovered trying to blend with the Muslims by not wearing the riqÄ [cloth patch, which might be required to have an emblem of an ape for a Jew, or a pig for a Christian] or áº“unnÄr [belt].” Kinani’s insistence that Jews and Christians wear the distinguishing piece of cloth or belt required of them is an instance of a legally defined sartorial differentiation being reconfirmed…His insistence may have had as much to do with concerns for ritual purity and food prohibitions as for the visible representation of social and political hierarchy, and it reinforced limits of intercommunal relations

Charles Emmanuel Dufourcq (1914-1978) , another important modern scholar of Muslim Spain, Â provides these concrete illustrations of the resulting religious and legal discriminations the subjected non-Muslim “dhimmis”Â suffered, and the accompanying incentives for them to convert to Islam:

A learned Moslem jurist of Hispanic Christian descent who lived around the year 1000, Ahmed ibn Said ibn Hazm (father of the famous mid-eleventh-century author Ibn Hazm) gives glimpses, in several of his juridical consultations, of how the freedom of the “infidels” was constantly at risk.Â  Non-payment of the head-tax by a dhimmi made him liable to all the Islamic penalties for debtors who did not repay their creditors;Â  the offender could be sold into slavery or even put to death.Â  In addition, non-payment of the head-tax by one or several dhimmis – especially if it was fraudulent – allowed the Moslem authority, at its discretion, to put an end to the autonomy of the community to which the guilty party or parties belonged.Â  Thus, from one day to the next, all the Christians [or Jews} in a city could lose their status as a protected people through the fault of just one of them.Â  Everything could be called into question, including their personal liberty… Furthermore, non-payment of the legal tribute was not the only reason for abrogating the status of the “People of the Book”;Â  another was “public outrage against the Islamic faith”, for example, leaving exposed, for Moslems to see, a cross or wine or even pigs.

…by converting [to Islam], one would no longer have to be confined to a given district, or be the victim of discriminatory measures or suffer humiliations…Furthermore, the entire Islamic law tended to favor conversions. When an “infidel” became a Moslem, he immediately benefited from a complete amnesty for all of his earlier crimes, even if he had been sentenced to the death penalty, even if it was for having insulted the Prophet or blasphemed against the Word of God: his conversion acquitted him of all his faults, of all his previous sins. A legal opinion given by a mufti from al-Andalus in the ninth century is very instructive: a Christian dhimmi kidnapped and violated a Moslem woman; when he was arrested and condemned to death, he immediately converted to Islam; he was automatically pardoned, while being constrained to marry the woman and to provide for her a dowry in keeping with her status. The mufti who was consulted about the affair, perhaps by a brother of the woman, found that the court decision was perfectly legal, but specified that if that convert did not become a Moslem in good faith and secretly remained a Christian, he should be flogged, slaughtered and crucified

Finally, expandingÂ  upon Professor Jane Gerber’s thesis on the “garish” myth of a Golden Age, the late Richard Fletcher (in his, “Moorish Spain”) offered a fair assessment of interfaith relationships in Muslim Spain, and his view of additional contemporary currents responsible for obfuscating that history:

The witness of those who lived through the horrors of the Berber conquest, of the Andalusian fitnah in the early eleventh century, of the Almoravid invasionâ€”to mention only a few disruptive episodesâ€”must give it [i.e., the roseate view of Muslim Spain] the lie. The simple and verifiable historical truth is that Moorish Spain was more often a land of turmoil than it was of tranquility…Tolerance? Ask the Jews of Granada who were massacred in 1066, or the Christians who were deported by the Almoravids to Morocco in 1126 (like the Moriscos five centuries later)…In the second half of the twentieth century a new agent of obfuscation makes its appearance: the guilt of the liberal conscience, which sees the evils of colonialismâ€”assumed rather than demonstratedâ€”foreshadowed in the Christian conquest of al-Andalus and the persecution of the Moriscos (but not, oddly, in the Moorish conquest and colonization). Stir the mix well together and issue it free to credulous academics and media persons throughout the western world. Then pour it generously over the truth…in the cultural conditions that prevail in the west today the past has to be marketed, and to be successfully marketed it has to be attractively packaged. Medieval Spain in a state of nature lacks wide appeal. Self-indulgent fantasies of glamour…do wonders for sharpening up its image.Â But Moorish Spain was not a tolerant and enlightened society even in its most cultivated epoch. 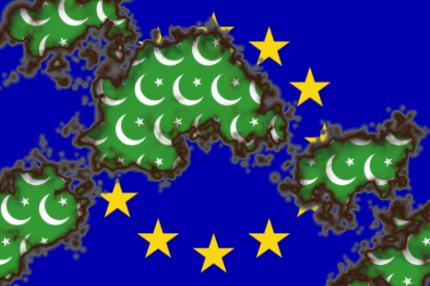 The EU’s latest dhimmified pandering to Islam is explained by the Italian newspaperÂ Il Giornale. Many thanks to Gaia for the translation, which was originally posted atÂ Vlad Tepes:

Four million euros to raise awareness of the Omayyad…

But of course! Whilst the population of the continent rocked between crisis and taxes, while the Troika [the European Commission, the European Central Bank, and the International Monetary Fund] spread the watchwords of austerity, while Europeans were asked for even more blood and tears, Brussels was allowed the luxury of financing with 4 million (â‚¬ 4,153,653 to be exact ) a program of “multilateral cross-border cooperation”, coordinated by the “Foundation for the Legacy of al-Andalus”.

The official purpose? Remedial measures to hurriedly correct what the Community institutions define as a â€” now intolerable â€” “serious imbalance”. What is this imbalance that is so bad? The pitiful wage of the workers? Unemployment levels among young people? Pension rates falling below reasonable levels? But no: the imbalance, according to Brussels, is the fact that not enough is known of the history of the Omayyad.