Police in Bradford and Scotland have launched an investigation after a group of uniformed far-right activists visited mosques over the weekend.

Representatives of Britain First… carried out what they called a Christian crusade, handing out leaflets and army issue Bibles to Muslim worshippers. 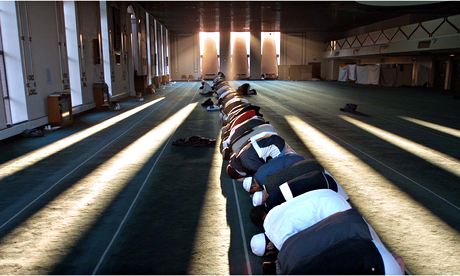 Men pray in Glasgow mosque, which was one of two targeted in the city by Britain First representatives. Photograph: Murdo Macleod for the Guardian

Police inÂ BradfordÂ andÂ ScotlandÂ have launched an investigation after a group of uniformed far-right activists visited mosques over the weekend.

Representatives of Britain First, an offshoot of the British National party that is contesting this month’s local and European elections, carried out what they called a Christian crusade, handing out leaflets and army issue Bibles to Muslim worshippers.

In Yorkshire, members of the group wore matching flatcaps and green jackets embossed with the party logo, which features a crown and the legend “Taking our country back”.

TheyÂ filmed themselvesÂ telling one Muslim man to “reject the false prophet Mohammed and read the Bible”, and they visited the campaign office of Nazam Azam, a Muslim Labour councillor running for re-election in Bradford, demanding action on “Muslim grooming gangs”.

Bradford’s lord mayor, Khadim Hussain, said 10 Britain First representatives turned up at his house on Saturday and intimidated two of his daughters.

Zulfi Karim, secretary of the Bradford Council of Mosques, said the action marked a new wave of extremist action and was co-ordinated with almost military precision. He is due to travel to London on Thursday to meet Stephen Williams, a Liberal Democrat minister with responsibility for community cohesion.

Karim said the situation was tense. “Things are sizzling,” he said, adding that he was fearful the situation could get out of control if police and other agencies did not step in to reassure the community. “This Friday there will be 100,000 Muslims worshipping in mosques in Bradford. If these people turn up there with a camera, who knows what could happen. The last thing we want is our young people taking the law into their own hands.”

Paul Golding, Britain First’s leader, denied his group had tried to scare anyone. “We weren’t aggressive and we didn’t intimidate anyone,” he said.

“To suggest it’s intimidatory to give out Bibles in a Christian country is nonsense. We live in a free country where you’re allowed to try to recruit other people to yourÂ religionÂ – Muslims do it all the time. If there’s anything criminal about that I’d like to hear about it. We videoed it all so you can see for yourself. We just went into the mosques, gave out a few Bibles and leaflets, talked to some elders and left.”

He said the activists visited 10 mosques in Bradford on Saturday, where they gave out about 100 Bibles, and two in Scotland on Sunday. He insisted the group had behaved civilly when visiting the lord mayor’s house and had not trespassed on his property.

Azhar Din, secretary trustee at Cumbernauld mosque in North Lanarkshire, described the visit from Britain First. “The initial approach of the group felt very intimidating, hostile and threatening, and they asked to speak to the imam in a raised voice,” he said. “The event occurred out of the blue and shocked some of the worshippers present.

“However, when the imam appeared they spoke calmly, and the situation became calmer and people were less concerned. The leader presented the imam with some leaflets on grooming’ and a Bible and spoke very calmly, before leaving shortly after.”

Police Scotland said it was investigating complaints made byÂ Glasgowcentral mosque and Cumbernauld mosque in North Lanarkshire on Sunday night.

Detectives in Bradford were trying to establish whether any criminal offences had been committed when the city’s mosques were targeted.

Khadim Hussain, Bradford’s lord mayor, said he received a phone call on Saturday afternoon from Golding, a former BNP councillor and editor of the BNP’s Flagship magazine. He said Golding asked him what he was doing to combat child sexual exploitation in the Muslim community and demanded an immediate meeting.

When Hussain asked him to make an appointment with his office, Golding and nine other Britain First representatives arrived at Hussain’s house in Bradford and spoke to two of his daughters. When the women said their father was not at home, one of the activists accused them of lying.

“They were not abusive but they were aggressive. The only purpose of such an outrageous action, to turn up with 10 people, is to intimidate a defenceless family,” said Hussain.

On Monday night, George Galloway, the MP for Bradford West, toured three mosques that had been approached.

In a statementÂ he demanded that the home secretary, Theresa May, take action to reassure the community and ban Britain First, which he called “a racist, neo-fascist gang of fanatics”.

Galloway said: “Theresa May should have been on the first train to Bradford, trailing officials and reassuring the Muslim community that not only would the perpetrators be punished but that she would ensure that an outrage like this never occurs again. Instead? A stony silence.

“I have written to the home secretary slating her failure, and that of her department, in dealing with this and calling on her to urgently come to grips with it.”

In a joint statement David Green, the leader of Bradford council, and his counterparts from the Conservative and Liberal Democrat groups, said: “We stand together to condemn strongly this outrageous behaviour by outside agitators in some mosques over the weekend … All houses of worship should be treated with respect by all members of every community, regardless of their faith or culture. Anybody who enters any house of worship must abide by the rules of that religion.

“An attack on any house of worship is an attack on everyone and the whole of Bradford district. We will not tolerate any place of worship being disrupted in an aggressive way and subject to disrespect.”

No mosques had been “desecrated”and all places of worship in the city were safe, they said.

Britain FirstÂ caused controversyÂ recently after using “Remember Lee Rigby” as their party slogan, an act that prompted the Electoral Commission to change the rules on how political parties describe themselves on ballot papers.

David Ward, Bradford East’s Lib Dem MP, arranged Thursday’s meeting with the government minister. On Tuesday he appealed for calm, saying: “We must be sensible about this and not overreact, while being aware that the community does feel under threat. They have a right to protection.” He lamented that the publicity was playing right into the extremists’ hands. “This is exactly what they want.”

DS Lisa Griffin, of Bradford district police, said: “We would like to reassure the people of Bradford that this matter is being taken seriously, and that appropriate action will be taken if any offences have been committed.”

Britain First describes itself as “a patriotic political party and street defence organisation that opposes and fights the many injustices that are routinely inflicted on the British people”.

The party is structured like a paramilitary organisation, with battalions representing different regions.

After the weekend’s events, Golding wrote on the party’s Facebook page that the “Christian crusade” would continue. “Our intelligence team is at present compiling lists of home address’s [sic] of Bradford MPs, councillors, newspaper editors and Muslim community leaders/imams, and we will be visiting them all over the next couple of weeks.

“We will also continue our invasions of Bradford mosques, madrassas and community centres – we are only getting warmed up! We appeal to moderate Muslims to act against the ‘enemy within’ or we will!”