The warning came shortly after Israel confirmed finding the bodies of the three students who disappeared while hitchhiking in Gush Etzion on June 12.

The bodies were found in a field near the Arab village of Halhoul some 10 minutes from the roadside spot where they were last seen, media reports said.

Israel has said Hamas is behind the kidnapping; last week, authorities released for publication the identities of two Hamas operatives wanted in connection with the kidnappings. They are now being sought for murder.

Why Hamas denies the kidnappings

HamasÂ continues to denyÂ that they were behind the kidnappings and murders of Eyal, Gil-ad and Naftali:

A Hamas spokesman denied responsibility Monday evening for the kidnapping and killing of three Israeli teenagers, threatening to “open the gates of hell” against Israel if it launched an attack against the Gaza Strip.

“The story of the disappearance and killing of the three settlers is based on the Israeli narrative only,” Sami Abu Zuhri told AFP. “The Israeli occupation is trying to refer to this narrative in order to justify its wide-scale war against our people, against the resistance and against Hamas.”

It looks like Hamas is taking its talking points fromÂ Mondoweiss and Ali Abunimah, who sickeningly claimed a week after the kidnapping Â thatÂ it was equally likely that Jews had abducted the boys:

Abunimah writes that the Israelis have an obligation to satisfy the public mind before making such accusations:

Reminder that the occupiers vandalizing Palestinian communities have still produced no evidence Palestinians “kidnapped” the settlers.

Abunimah also asked a very logical question:Â Why aren’t Israeli soldiers raiding the Israeli colonies on the West Bank? Are Jews really immune from suspicion of foul play in connection with missing teenagers?

But now we know that Hamas was behind it. The two missing kidnappers and their families are Hamas associates, and even Hamas doesn’t deny that.

Normally, Hamas is proud of their terror attacks. This time they are denying it. The question is, why?

This can now be answered, based on theÂ background information now being revealed:

Eyal Yifrach, 19, Naftali Fraenkel, 16, and Gil-ad Shaar, 16, the three kidnapped Israeli teenagers whose bodies were found on Monday, realized very quickly that they had been abducted on the night of June 12.

The three teens were waiting at Geva’ot Intersection, west of the settlement of Alon Shvut in the Etzion Bloc south of Jerusalem, soon after 10:15 p.m, looking to catch a ride heading west on Route 367 toward Beit Shemesh and from there to locations in central Israel where each of them lived.

The prevailing assessment within the defense establishment is that the kidnappers, at least at first, only saw one of the hitchikers, perhaps Yifrach, who did not know Shaar and Fraenkel. Only once the kidnappers’ Hyundai i35 came to a stop did the kidnappers realize that they would be outnumbered by their hostages within the small confines of the car. This may be what changed the nature of the crime from kidnapping to murder, security sources suggested. 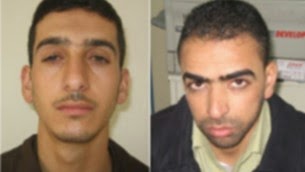 Recognizing, too late, that the car was not an innocent Israeli vehicle, one of the teens called the police at 10:25 p.m. and whispered, “We’ve been kidnapped.” The call was transferred immediately to a senior female officer, who continued to ask questions but received no reply. The call lasted for 2:09 minutes and was then cut off. The officer called the number eight more times, but received three busy signals and reached voicemail five times.

The kidnappers, apparently realizing that a call had been made, shot the three teens dead soon afterwards in the backseat of the car, military sources said.

Early assessments by some regarding the professionalism of the terrorists appear to have been misplaced: the killers seem to have panicked. The three teens did not fulfill the role Hamas sought for them, security officials indicated, to serve as bargaining chips that would free thousands of Palestinians prisoners and promote the Hamas brand throughout the West Bank.

The killers then drove a further 10 minutes or so before switching vehicles. They abandoned the Hyundai i35, a relatively new vehicle, and set it on fire.

They transferred the bodies to the second vehicle, and drove close to the field in the Halhul area where the three corpses were ultimately discovered, bound, partially buried, and in what eyewitnesses said was “in not good condition,” on Monday afternoon. The land where the bodies were found belongs to the Kawasme family, Channel 2 news reported.

Unbeknownst to the killers, the emergency call had not prompted an alert by Israel’s security forces. The senior officer did not pass on the information to her superiors or listen to the recording for further evidence, concluding that it was a prank call. The security forces realized there had been a kidnapping, and began what became an 18-day search operation, only some seven hours later.

Assuming that they were being hunted down right away, the kidnappers quickly abandoned the three bodies, and made their escape.

Hamas is denying the murdersÂ because it was a botched operation.Â

The goal was to kidnap a soldier or a “settler” to bargain for the release of prisoners. Hamas has made no secret of that desire, and evenÂ published handbooksÂ on how to best accomplish a kidnapping.

The appearance of two more teens, the panicking over the phone call, and the murders in the backseat (from where it would have been nearly impossible for them to escape or fight back) were not planned. I’m not sure that the torching of the stolen car was planned either.

The named kidnappersÂ are associated with Hamas, as are their families. It is clear that they felt they were being pursued, they got rid of the bodies as quickly as they could – in lands belonging to one of their families – and they hightailed it out of the area as fast as possible, no doubt at the behest of their Hamas handlers. They could have waded to Jordan by the time the Israeli police recovered from their serious errors of judgment regarding the phone call.

The discovery afterwards that two of the victims were children and even some Arabs might object to murdering minors ensures that Hamas will not take credit for this attack, even though it was clearly planned by them. Hamas is already on thin ice with Egypt accusing it of being a terror group and the unity government not working out very well.

If they had successfully kidnapped a soldier, or a Jewish adult, Â Hamas would have unlimited prestige and it would gain the protection of the PLO and Fatah, which have made the exchange of prisoners a major platform. Two dead children would not engender the amount of sympathy Hamas required from its erstwhile partners in “unity.” Right now, with the outrages by Islamists in in Syria and Iraq, Hamas does not want to be associated in anyone’s minds as another version of ISIS.

This is why Hamas must lie about its involvement in this hideous murder of children, to maintain a tiny bit of deniability as it attempts to raise its profile in the Arab world as a major political player and not as a terror group.