Yazidi women were dragged out of the house by their hair….

The young women and girls are being treated as spoils of war and trafficked around the region. Only a few have managed to escape.

Adla has just been reunited with her husband at a camp in the town of Zakho. She was taken with others from her village and held for 38 days.

“At first I was taken to a big house in Mosul. It was full of women,” says Adla, trembling. “They locked all the windows and doors and surrounded it with guards.”

“Every day or two, men would come and make us take off our headscarves so they could choose which of us they wanted. Women were dragged out of the house by their hair.”

The teachings of Muhammed endorsed sex slavery, beheadings in the war against non-Muslims. So much of that is taking place today. 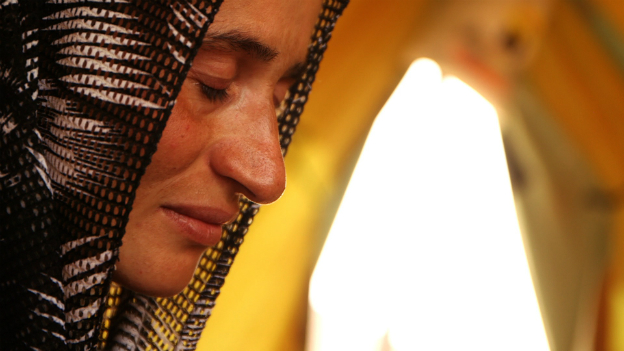 As Adla was moved from place to place, she saw her friends being violently beaten and raped. One was forced to leave with her little son at gunpoint.

She says that for a long time the militants left her alone because she was pregnant, but later she became more worried for her safety.

“One day a lot of men came to take girls and we decided we must run away. Even if they captured and killed us, we’d prefer to be dead than to stay.”

Minority expert Khidher Domle has collected information on the locations where Yazidis are being held in parts of Iraq now under IS control.

Every day or two, men would come and make us take off our headscarves so they could choose which of us they wanted. Women were dragged out of the house by their hair”—Adla,Â Yazidi woman held by IS

Some are in actual prisons, others in a former palace and a wedding hall.

He is able to talk to several captive women who have mobile phones.

Vulnerable targets”The situation is unbelievable, especially in Mosul and Tal Afar,” he says.

“The international community isn’t investigating. They don’t believe such a large number of women have been kidnapped by IS.”

He says Yazidis are being specifically targeted because IS wants strategic control of their land but also because of their ancient beliefs, which the Sunni Muslim extremists consider heretical.

“They think they can kick the Yazidis out, especially from the Sinjar area, and if the Yazidi women don’t convert they can use them as slaves, as gifts of war.”

At a school where she is taking shelter, I meet an unmarried woman in her early twenties, who agrees to tell me her horrific story of being held and tortured by IS.

“The beat us with cables, starved us and made us wash our faces with petrol,” she says.

“They tried to take one of my friends and she slit her wrists. Two others hanged themselves from the ceiling fans.”

She got away during air strikes targeting IS and walked for three days to find safety. Now she worries for those she left behind.

“They will sell girls to whoever wants to buy them – girls aged nine and over,” she says. “Some men bought two or three, even four or five at once. It’s shameful.”

And that reminder is too much for the woman’s aunt. She has two small daughters who are missing. She begins to slap her cheeks and wail.

“It’s a disaster, a disaster,” she cries. “They took all our girls. It’s all we care about. The world must help us.”

Calls for interventionAt her house in Irbil, Iraq’s only Yazidi parliamentarian, Vian Dakheel, now has more than 30 displaced relatives living with her.

She uses crutches after she was badly injured in a helicopter crash while trying to deliver aid to the mountain last month.

“Publicity would also help just like when Mrs Obama got involved in trying to rescue the schoolgirls captured by Boko Haram in Nigeria,” she adds.

“We’re a minority here and there’s no strong lobby to support us. We ask for support from those governments that care about human rights and humanity.”

For the families of the missing women and girls, time is running out. They fear if they are not found soon, they might never see them again.

2 thoughts on “Mohammedan Sex Slavery: Just Like in the Days of the Prophet”