Thanks to the Elder

Hamas newspaper Felesteen has another of a series of articles by Professor Saleh Alrqub attacking Judaism (see previousÂ postÂ about him.)

InÂ this edition, Alrqub says that Judaism provides a religious basis for violence and terrorism, which prompts Jews to murder, destruction and brutality. 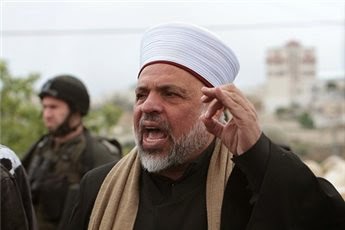 At the same time, Felesteen hasÂ another articlequoting the Palestinian Islamist leader Sheikh Tayseer Tamimi calling for a “second Al Aqsa intifada” terror spree to stop Jews from walking around a holy site.

Even though there have been hundreds of articles in the Arab press about every time a Jew takes a quiet stroll on the Temple Mount, Tamimi said that the Muslim world has ignored the danger and must mount a new uprising against Israel.

Tamimi even called on Christians to rise up against Israel during hisÂ 10-minute tiradeÂ in front of the Pope.

It is apparently impossible for an Islamic cleric to be too extreme to lose his followers. But if one would say anything conciliatory about Jews or Israel, that would mark the immediate end of his career.

Who’s chickensh*t? Netanyahu was in Israeli special forces. Obama was in the “choom” gang. A member of Israeli Prime Minister Benjamin Netanyahi’sÂ coalition is formulatingÂ legislationÂ to put strict limits on the Islamic call to prayer, known as the Athan, being blasted from mosques in JerusalemÂ and across Israel.Â TheÂ legislation, that is likely to attract accusations of religiousÂ intoleranceÂ from Israel’s Muslim minority,Â claimsÂ the prayer callsÂ generate, “intolerable noise” that disrupts citizens’ sleep. (BNI)