We’re at war with the Islamic State & no one knows where halal fees go writesÂ Bernard Gaynor.

Â Islam is at war with us, not the other way around. And Â the halal fees go straight into the jihad. Â (sheik yer’mami)

The global halal market is set to reachÂ $10 trillion by 2030. That’s a lot of moolah for the mullahs.

And every item of food certified halal has to be checked by an Islamic checker. And it doesn’t stop there. Everything else about the food must be compliant too. The feed. The transportation. Even theÂ packaging. The list goes on.

Forms for halal certification in Australia go intoÂ great detail. For instance, processed food suppliers need to give a list of every product and ingredient used. And they also need to give details of the number of employees. Plus the company’s annual turnover figures.

What’s that got to do with the price of a kebab in Mecca?

When Islamic clerics talk halal, they talkÂ global domination. It’s achieved by taking the cream of the profit off non-Islamic businesses and channelling it into mosques, madrassas and, on the odd occasion, masked madmen. It’s also designed to ensure that Muslims are prioritised for employment. In Australia. And with the support of the Australian government.

Halal certification organisations confirm that none of their slaughterman areÂ from a ‘deviated’ sect. This is backed up by statements on theÂ meat industry websitesÂ and in Australian governmentÂ regulatory compliance standards. In effect, the entire Australian meat industry, worth over $12 billion annually, is being Islamised. Reports indicate that well over half of Australian meat is nowÂ halal. I’ll give you one guess which religion most slaughterers practise.

As time goes by, things will only get worse. And so will the regulatory Islamic requirements. Already one level of bureaucracy is not enough. We know this because the Islamic checkers here in Australia are checked by Islamic checkers fromÂ America.

And the checks don’t come cheap. They cost, and they costÂ every year.

And you can bet your bottom dollar that if companies are going to the lengths of ensuring that there arehalal liftsÂ andÂ halal portsÂ to ensure halal food is free from contamination, then they will want to make sure that every other step in the chain meets the requirements of Islamic purity too. That means clean Muslim workers only.

You don’t want to unhalal the lift by letting the dirty kaffirs use it do you? 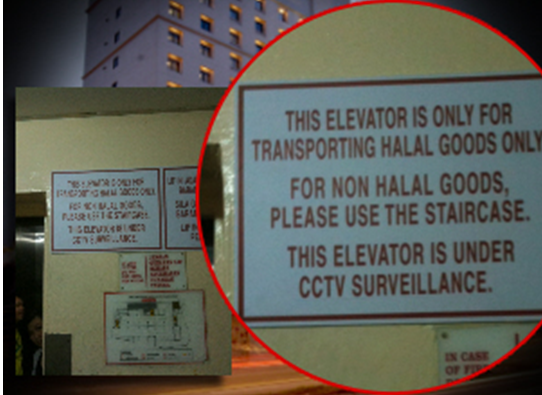 And all these compliance costs are passed on to the consumer. Just like the GST. Except that halal certification fees don’t go to the state. They are an Islamic tax and they go to Islamic organisations.

Like I said at the start, that’s a lot of moolah for the mullahs. But unlike our taxes, which are required to be collected and spent in an accountable and transparent manner, there is often no way of knowing when you pay this Islamic tax or where it ends up.

But we do have an idea. Presumably, it is reasonable to expect that profits obtained from the imposition of an Islamic tax will be spent in accordance with the provisions of Islam as well. After all, it would not really be halal to utilise the proceeds of halal certification in a non-halal way.

And Islamic law states clearly that a percentage of wealth must be donated. This is calledÂ zakatÂ and is one of the five pillars of Islam. Zakat is used for eight specific purposes. One of these purposes isÂ jihad. As detailed on theÂ Sharia Finance Watch website, this is how Muslim experts define jihad for the purposes of zakat:

Because zakat is supposed to be anonymous, it’s hard to know who’s giving what to whom. But we do know that Islamic charities have been channelling money to terrorist organisations. And not just in theMiddle East, where Kuwaiti television stations and social media sites have been helping to raise funds to purchase mortar rounds and sniper bullets for the Islamic State. It’s also been occurring in the West, with halal certification companies directly linked toÂ terrorist organisations.

And an Australian government report, published by the Australian Institute of Criminology and titledMoney laundering and terrorism financing risks to Australian non-profit organisationsÂ makes it very clear that this is aÂ serious local risk as well. It identifies that Islamic charities are susceptible to subversion. It notes research that suggests obligatory charitable donations (zakat) are the largest single source of charitable income for terrorist organisations. And the report goes on to state:

“Charities not only provide a means of generating funds but also of concealing its diversion. Donors that are both witting and unwitting, supply a steady stream of funds that may be bequeathed anonymously due to cultural or faith-based reasons. Verification inquiries around the destination and use of donations are moderated by community confidence in the charities intentions. Funds collected on the pretext of charitable use can then be re-routed to the intended recipients, or divided between charitable and terrorist support. The latter course can act to reinforce terrorist operations, by cultivating sympathies and developing recruitment grounds for the next cohort of militants.”

This report also outlines several examples of Islamic charities that have done just that. 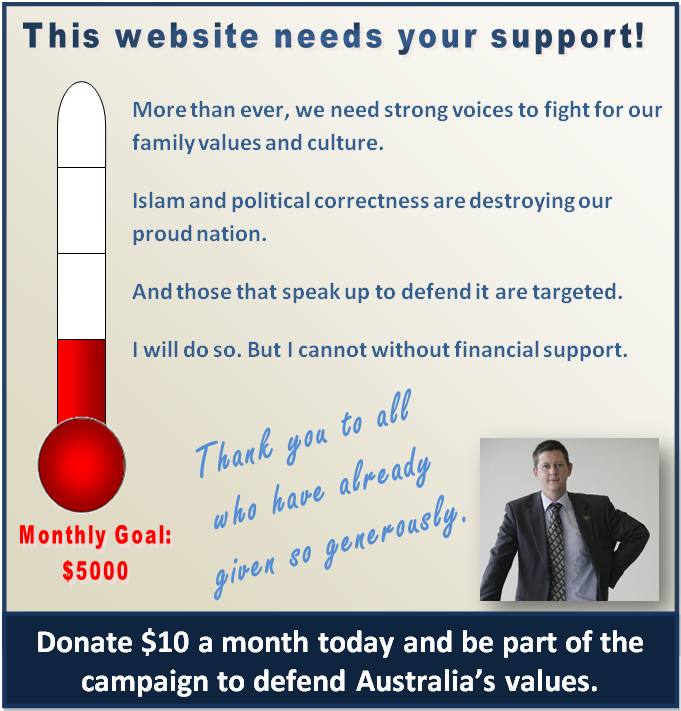 It is important to understand at this point that every time you buy a halal product, you are contributing to an Islamic organisation that is obliged by the ‘Prophet’ to donate its profits. In effect, you are funding zakat and you have no idea where your dollar goes specifically, but you do know that very often zakat generally ends up bankrolling jihadis.

If that doesn’t make you feel uncomfortable, this will. The Attorney General’sÂ websiteÂ states that:

A person can be convicted of financing terrorism if:

– it is unjustifiable to take that risk in the circumstances, that person could be convicted of financing terrorism.

It would seem that there is a good case to argue that the Australian government is in breach of its own anti-terror funding laws. After all, Australian government regulatory provisions on halal certification are effectively forcing all Australians to pay this Islamic tax when there is no requirement to do so. And there is a substantial risk that these taxes will end up being used to fund terrorism, especially as Australia’sIslamic financiersÂ are in the spotlight for sending funds to help Australia’s young men on the warpath with the Islamic State.

Not that the Australian government’s position should be a surprise. The United States government actually sent a bunch ofÂ guns and moneyÂ to ‘Syrian rebels’ just before the Islamic State exploded across the border and into Iraq. That’s even worse. And now they’reÂ doing it again. I’m sure this time things will work out just fine.

Of course, if you have a bit more of a sticky-beak around the Attorney General’s website, you’ll find that our government already knows that financial flows into Syria are a large funding source for the Islamic State. It’s written right there on the page outlining why this Islamic group is aÂ proscribed terrorist organisation. And I say Islamic because that’s what the Attorney General’s department says as well. It even describes the Islamic State as a Sunni group.

Someone should tell the Prime Minister before he does the whole ‘there’s nothing Islamic to see here folks’ spiel again.

Anyway, maybe the Islamic State’s Syrian funding sources detailed on the Attorney-General’s webpage refer to the charity of the United States government. Or maybe it refers to donations sourced in Australia to provide ‘aid’ in Syria. Who knows? But you don’t need to be an expert googler to find the sponsored links of organisations close to halal certification companies in Australia that are sending ‘donations’ to Syria.

The ‘War on Terror’ is not going so well, even though victory has been announced more often than a John Farnham comeback tour.

The Islamic State or ISIS or ISIL or whatever you want to call it has been listed as a terrorist organisation since 2 March 2005. That was about the time that we were starting to lose the war that we won. It didn’t control large swathes of Iraq at that point.

Since then Australia’s terror levels have gone up. And soldiers have been given the idea that it’s probably not so safe toÂ wear their uniform in publicÂ anymore. In Australia. And now the Royal Australian Air Force has been called in to startÂ dropping bombsÂ after not being required for the last decade and a half of fighting.

I wasn’t around at the end of World War Two, but somehow I get the feeling that we don’t have the same victory vibes that our grandfathers did.

Given all this and the fact that Australia’s commander in the Middle East has identified that attacking the Islamic State’sÂ funding sourcesÂ is a key element in our nation’s military strategy, it’s time to take a good hard look at where funds raised via halal certification and distributed as part of Islamic zakat actually go.

And hopefully we’ll also be able to answer a more fundamental question at the same time: why are Australians forced to pay this halal tax onÂ vegemite? 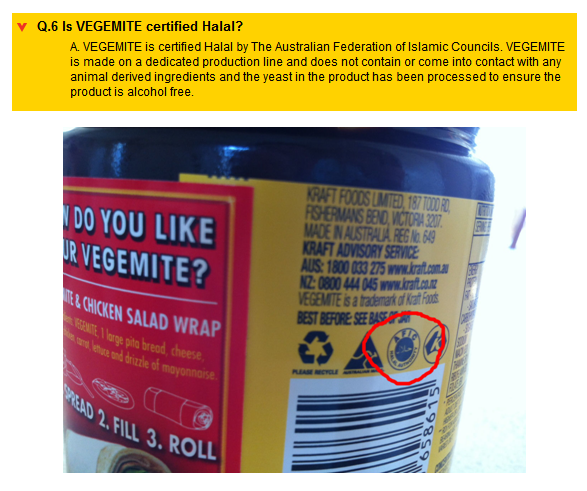 2 thoughts on “The Halal Racket: Lots of Moolah for the Mullahs….”