(CNN)Usaamah Rahim, who was fatally shot after waving a military knife at law enforcement officers in Boston, was originally plotting to behead Pamela Geller, an activist and conservative blogger, law enforcement sources told CNN on Wednesday.

I’ll post the video with that CNN interview asap

But Rahim, a 26-year-old security guard who officials believe was radicalized by ISIS and other extremists, decided instead to target the “boys in blue,” a reference to police, according to court documents.

“I can’t wait that long,” he said of the original beheading plan, according to an FBI affidavit filed in federal court in Boston on Wednesday. More here.

Female journalist takes Hizb ut-Tahrir to Anti discrimination board after being made to sit at the back in segregation at a HuT conference. About time too

FIRST ON 7: An Islamist group has been accused of sexual discrimination because it makes women sit at the back of public meetings. Bryan Seymour reports.
AU.NEWS.YAHOO.COM

Muslims Destroy Church, Beat Christians for ‘Proselytism and Conversions of Muslims’ in Pakistan…

On May 28, in Chakwal city south of Lahore, Muslim men destroyed a Protestant church and beat six Christians, including the pastor. Some of those wounded… RAYMONDIBRAHIM.COM

“They targeted me for violating Sharia blasphemy laws. They mean to kill everyone who doesn’t do their bidding and abide by their law voluntarily,” Geller told CNN’s Erin Burnett.

“This is a showdown for American freedom. Will we stand against this savagery or bow down to them and silence ourselves?”

Geller said that she’s had an “army of security” since last month’s thwarted attack.

“This is what is required just to show a cartoon in America, 2015,” she said. “It’s striking. It’s devastating, and people need to understand what’s at stake. I mean, if we surrender on this point, what will we surrender next?”

About two hours before Rahim’s confrontation Tuesday with officers on a Boston street, he allegedly told an associate he was “going to … go after them, those boys in blue. ‘Cause … it’s the easiest target,” the documents say.

Rahim’s alleged associate, David Wright, 25, appeared in U.S. District Court in Boston on Wednesday to face a charge of obstructing a federal investigation by destroying electronic evidence on Rahim’s smartphone. A detention hearing was scheduled for June 19 after prosecutors said he was a flight risk.

Wright allegedly attempted to destroy co-conspirator Rahim’s cell phone and conceal evidence of their plans, according to the documents. Wright faces a maximum penalty of five years in prison if convicted.

“I just got myself a nice little tool,” Rahim allegedly told his associate, according to the court documents. “You know it’s good for carving wood and … carving sculptures.”

In a recorded conversation, the two men are then heard laughing.

Rahim was not on the phone at the time of the shooting and was not shot in the back, as had been reported by a relative, according to clergy and civic leaders who met with authorities earlier Wednesday.

Authorities showed surveillance video of the incident during an unusual meeting with religious and civil rights leaders in an attempt to allay community concerns about the shooting.

“What the video does reveal to us very clearly is that the individual was not on the cell phone, the individual was not shot in the back and that the information reported by others that that was the case was inaccurate,” Darnell Williams, president and chief executive of the Urban League of Eastern Massachusetts, said at a news conference with the police commissioner and others.

Rahim’s brother has posted on social media that the suspect was on the phone with their father Tuesday and was shot three times in the back during the confrontation with police.

Williams said prosecutors want Rahim’s family to see the video before showing to the public.

The religious and civic leaders said Rahim appeared to be shot three times — in the shoulder, abdomen and chest. Police had earlier reported that he was struck two times.

Imam Abdullah Faaruuq, speaking for the Muslim community, said the video was inconclusive.

“I don’t think that he was shot in the back. … However we couldn’t see clearly at all,” he said, adding that the distance preventing from seeing whether Rahim was brandishing a knife.

He added, “We can’t say what happened. We weren’t there. We do see a very vague video that is not clear as to what transpired. It wasn’t at a bus stop. He wasn’t shot in the back and there is not detail enough on the video to tell us exactly what happened.”

Boston Police Commissioner William Evans said the surveillance video shows four or five officers approach the suspect without their weapons drawn. The officers backtrack as Rahim comes after them and gets “close enough to cause imminent harm.” They eventually draw their weapons and open fire.

“We never anticipated what his reaction would be and that he would pull out … a military knife and approach the officers,” Evans said.

Evans said authorities met with local leaders in order to “calm down the emotions” caused by misinformation about the shooting.

Later, authorities arrested Wright in connection with the case.

“As of right now, we don’t think there is any concern for public safety,” Lisi said.

“We believe he was a threat,” Evans said. “He was someone we were watching for quite some time.”

Rahim had been under surveillance by the U.S. Joint Terrorism Task Force, officials said.

Ibrahim Rahim, an imam at the Lighthouse Mosque in Oakland, California, posted about his brother’s death on social media. 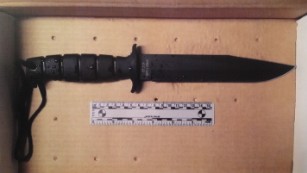 Police released this image of a knife Usaama Rahim allegedly waved at officers before being fatally shot.

Ibrahim Rahim wrote on Facebook that his brother was shot while at a bus stop on his way to work. He asked for prayers for his brother.

In a 2013 interview with CNN, Ibrahim Rahim voiced his objection to presiding over the funeral of Boston Marathon bomber Tamerlan Tsarnaev.

“We don’t want people looking at us as though we are empathetic in any way to what has happened at the hands of this man and his brother,” he said at the time, referring also to Dzhokhar Tsarnaev, later convicted in the bombings.

Ibrahim Rahim said his brother was on the phone with their father Tuesday and was shot three times in the back during the confrontation with police.

The FBI-led task force had been watching Rahim and two associates also believed to be radicalized, according to a law enforcement official. Rahim had been monitored for at least a couple of years. Investigators were talking to the associates, and various locations in Massachusetts and Rhode Island were being searched, officials said.

The Rhode Island raid was connected to a third person believed to be associated with David Wright and Usaamah Rasim, according to two federal law enforcement sources. The third person was connected by more than just an “Internet relationship,” one law enforcement source said. The sources did not provide a name for the individual they were investigating.

The FBI is still investigating whether more people are connected with the three.

The FBI noted a recent change in Rahim’s behavior, including social media threats against police, which prompted agents to try to approach him Tuesday, according to the official.

Evans, the police commissioner, said the shooting occurred about 7 a.m. Tuesday after officers and FBI agents confronted Rahim, who suddenly turned around with a large black knife and lunged at officers and federal agents. The officers had not drawn their weapons at that point.

The officers retreated and ordered the man to put down the weapon before they opened fire, Evans said. The shooting was captured by surveillance video and observed by witnesses.

“Unfortunately, he came at the officers and, you know, they do what they were trained to do and, unfortunately, they had to take a life,” Evans said.

A Boston police officer and a federal agent opened fire on the suspect, Evans said.

The shooting is under investigation.

One thought on “CNN: Jihadi Shot in Boston was planning to behead Pamela Geller”