Devout Muslims have answered ISIS leader’s call to make the month of Ramadan a time of “calamity for the infidels.”

Unrelated eh? Well, that’s the message being reported on every news channel, but that message is wrong! All three acts of terrorism heralded the start of Ramadan, all three were motivated by Islam and all three occurred after Friday prayers.

A DARWIN teenager arrested by police searching for stolen goods had allegedly compiled a hit list of people he wanted to behead and is suspected of being linked…  NEWS.COM.AU

IS massacres 145 civilians in Syria offensive

People wake up! Pro Palestinians can kill you if you do not agree with their opinions. Share this video!…
I-SUPPORTISRAEL.BLOGSPOT.COM

Nestled in the heart of Virginia and the Blue Ridge Mountains lies an Evangelical Mecca, where Christianity and Country music are as indigenous to the region as…–DCCLOTHESLINE.COM

The Czech Republic will not take any so called ‘migrants’ from Africa and Arabia, Poland will take only Christians…… 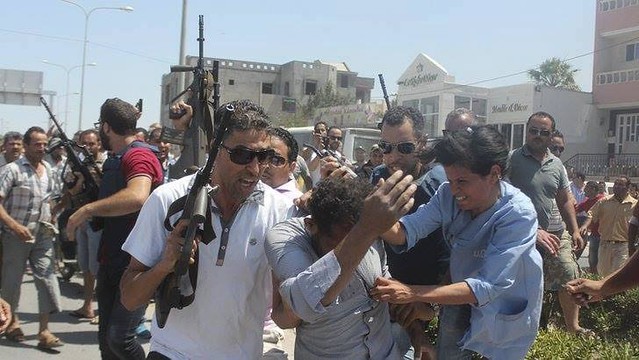 2126 Security forces claim that a bomb was found on the terrorist’s body which lay with a kalashinkov assault rifle where he was shot.

1720 Death toll has risen to 37 and 36 injured. President Essebsi has called on Tunisians to stand united and announced extra security.

1513 British, German, Irish and Belgian tourists are among the dead according to agency reports

1443 Among those transferred to hospital are British and Germans

1415 Retired General Mokhtar Ben Nasser said: “This type of terrorist attack was expected and is intended to the tourist industry. Beji Caid Essebsi and Habib Essid to visit Sousse.

1400 Six Nationalities among dead according to Ministry of Interior.

A gunman has attacked a tourist hotels in the Tunisian town of Sousse.

Reports claim that a man entered the hotel armed with a kalashnikov rifle and opened fire on tourists shortly before lunchtime.

Earlier reports that another another gunman also opened fire at holidaymakers.

At least one gunman has been killed.

One thought on “Ramadan Terror Around The World”