Purely for Jewish consumption. When Sarko was in power, he did nothing about it. He is no longer in a position where he could do anything about it. 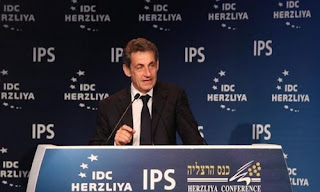 Arab media over the past day have reported a bizarre story claiming that former French President Nicolas Sarkozy, speaking in Israel, said that the Jewish state should be exclusively for Jews and the Palestinian state exclusively for Arabs.

The story is wholly fictional. In fact, Sarkozy said in 2011 that the idea of a “Jewish state” is “silly.”

But while researching it I found something that Sarkozy said last week in Israel at the Herzliya conference that explains the mindframe that causes Arabs to make up stories like that.

France to add housing for 10,000 migrants

With an ever-increasing influx of migrants crossing the French borders, France announced on Wednesday plans to offer them over 10,500 housing places. – The Local
.
More Wishful Thinking and Reality Denying  from Manuel Valls

Manuel Valls says at meeting aimed at building ties with Muslim community that hate and extremism are ‘not Islam’
.

“The hate speech, anti-Semitism that hides behind anti-Zionism and hate for Israel… the self-proclaimed imams in our neighborhoods and our prisons who are promoting violence and terrorism.”

Sarkozy said that humanity owes a debt to the Jewish people for their persecution over the centuries, which culminated in the Holocaust. “The silence of the nations while the crimes were committed is a blemish on the conscience of humanity, he said. “We all failed and have a debt toward the Jewish people, and it continues to exist.” He said that the “only way to do something about it” is to always ensure the security of the Jewish people.

“Mankind has not yet understood that the fate of the Jews is always the forerunner of what will happen to others,” he said. “Fighting for the security of Jews and Israel is fighting for all those who make a difference in the world, and this is my profound conviction.’’

Sarkozy mentioned that there exist schools in France where teachers cannot teach about the Holocaust.

“It’s true there are schools in France where you cannot teach the Holocaust,” he said. But he insisted that France ‘’is not an anti-Semitic country.’’

Without saying this explicitly, Sarkozy is saying that French schools in Muslim neighborhoods – seemingly state schools where the curriculum is set nationally – refuse to teach an important part of 20th century history because they are antisemitic.

It is the same antisemitism that causes Muslims and Arabs to make up stories that Israel is planning to ethnically cleanse Israel of Arabs.

One thought on “Sarkozy: “There are schools in France where you cannot teach the Holocaust””