If there is an old scandal I must have missed it. Mohammedans live in another universe; so keep that in mind when you read this.

A Dutch politician, known for his anti-Islam antics, has aired a new movie based on Prophet Mohammed’s controversial cartoons on a national television in the Netherlands that is expected to add more fuel to the global Islamophobic fire.

There is no “global Islamophobic fire” because there is no such thing as “Islamophobia”. To resist the spread of Islam is the sacred duty of every free Western cititzen that still has his head screwed on.

Here’s the story from the Gates of Vienna: 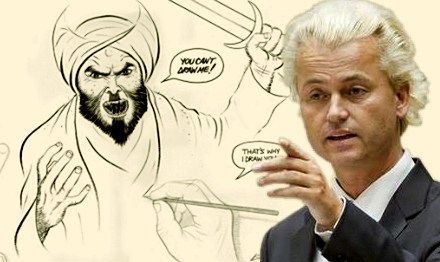 As we reported last weekend, Geert Wilders’ video of the Garland Mohammed cartoons was scheduled to be broadcast on Dutch state TV last Saturday, but an alleged mistake caused the tapes to be switched and prevented the Motoons from being aired.

The second broadcast of them was scheduled for today, and went off as planned. The PVV just sent out the following notice:

Today, a selection of Muhammad cartoons were shown on Dutch public television.

The cartoons were originally shown at an exhibition of Muhammad cartoons in Garland, Texas, last May, where PVV leader Geert Wilders gave a speech, and which was attacked by terrorists.

Geert Wilders: “The only way to show terrorists that they are not going to win is to do exactly what they do not want us to do. I do not broadcast the cartoons to provoke; I do it because we have to show that we stand for freedom of speech and that we will never surrender to violence. Freedom of speech must always prevail over violence and terror.”

So is it time for mobs representing the Tiny Minority of Extremists to start torching embassies in Amman and Jakarta? Stay tuned.

Once again, here is the video that was broadcast on Dutch TV:

The Wall Street Journal has posted an article (requires subscription) about the broadcast of the Motoons.

In the nearly three minute video aired on Wednesday, Dutch Member of Parliament Geert Wilders claimed that his act, which comes during the Muslim holy month of Ramadan, was his expression of freedom of speech.

“Islam and terrorists do not want us to expose these cartoons,” Wilder says at the beginning of the video. “But terror and violence are not allowed to win of  (over) freedom of speech. That’s why we have to do what terrorists try to impede us from doing,” he added.

The movie was shown on Dutch National TV during programming reserved for political parties in Netherlands.

Four days earlier, Geert had uploaded the same video on YouTube that showed nine caricatures of Prophet Mohammed. These were the same drawings that were shown at a conference in the U.S. city of Texas earlier this year.

Prophet Muhammad’s depiction is considered highly offensive to the beliefs of the world’s nearly 1.6 billion Muslims, who are currently experiencing the most spiritual season of the year, the holy fasting month of Ramadan.

We reject the beliefs of the world’s nearly 1.6 billion Muslims and we don’t give a rats ass for Ramadan.

The Dutch Foreign Ministry has said in the past that Wilder’s opinion did not represent the Netherland’s official position.

It is expected that Wilders would air the same video on national television at least once more on July 3. In May, the Dutch politician had sent a letter to the Dutch parliament requesting that an exhibition of cartoons depicting Prophet Muhammad be shown in the Dutch parliament. His request was rejected.

Turkish magazine to Charlie Hebdo: No, nothing has been forgiven!

Cafcaf magazine responds to Hebdo in the same language, saying that nothing will be forgiven by those who have been oppressed and blood still being spilt.

Turkish satirical magazine Cafcaf, the only publication in Turkey which places emphasis on Islamic values, has hit back to the Charlie Hebdo arrogance with a unique cover. —World Bulletin/News Desk