Israeli police arrested a fourth person for calling Mohammed a pig. Avia Morris, the first person arrested described being taunted with cries of “Allahu Akbar”  and “Kill the Jews” along with signs of support for ISIS. But it only became a legal matter when the twenty-year-old woman retorted, “Mohammed is a pig.” 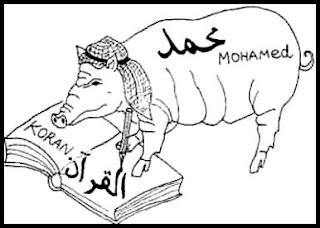 Calling for the death of infidels isn’t a crime. Insulting Mohammed is.

Avia got off lucky. When a young woman named Tatiana Soskin drew Mohammed as a pig scrawling in a Koran, the Clinton administration was more outraged by this than by the World Trade Center bombing.

Its spokesman said that it gave “great thought to this… at the very highest levels of our government.”

It denounced the “outrageous, crude and sick portrayal of the Prophet Mohammed” and claimed, “This woman is either sick or she is evil… she deserves to be put on trial for these outrageous attacks on Islam.”

That rant didn’t come from some storefront Mullah or Bin Laden clutching his assault rifle in a cave on an Al Jazeera video. It came from the twisted mind of a sick and evil appeasement administration.

Sick and evil might have been a better description of Mohammed’s practice of sex slavery than of a young woman who drew a cartoon of a rapist as a pig. When the Caliph of the Islamic State was revealed to have taken American hostage Kayla Mueller as his slave, he was following the law of Mohammed.

As ISIS put it, “Enslaving the families of the kuffar (non-Muslims) and taking their women as concubines is a firmly established aspect of the Shariah (Islamic law) that if one were to deny or mock, he would be denying or mocking the verses of the Koran and the narrations of the Prophet.”

Was Mohammed a pig? He raped a little girl, forced his son to divorce his slave wife so he could have her, and took a number of captured non-Muslim women as slaves the same way the ISIS Caliph did. Their numbers included a number of captured Jewish women, Safiyah and Rayhana, as well as Arab women such as Juwayriyah. Rape and sexual slavery was a way of life for Mohammed and his men.

By any civilized standard, Mohammed was a pig and worse. And yet instead of calling out those who praise a rapist and a pedophile, we lock up the young women who dare call out his piggishness.

There is no reason to be surprised that these piggish habits should also be a way of life for his followers.

As we consider the fate of Kayla Mueller or of the thousands of girls groomed to be sex slaves to Muslim men in the UK, we must conclude that what happened to them took place because our societies have failed to tell the truth about Mohammed. 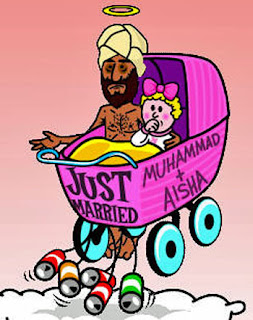 The response to Muslim violence has been greater extremes of censorship. There is a direct connection between the amount of protective censorship imposed on any criticism of Islam and Islamic violence. The Clinton administration rant about Tatiana’s cartoon took place after the World Trade Center bombing. And yet it would have been unthinkable then to lock up a Mohammed filmmaker, as Hillary and Obama did after the Benghazi massacre. Each new atrocity creates new momentum for censorship.

The Israeli police behave the way they do because the authorities are desperate to keep some kind of peace and it is always easier to censor, arrest and control non-Muslims than Muslims. That is also why the authorities in European countries are far more willing to lock up those who burn the Koran or criticize Islam than the Salafis who patrol the streets as Sharia police and call for a Caliphate.

This is not tolerance. It’s appeasement. It’s cowardice and treason.

Telling the truth will become more dangerous, but it will also save lives.

What is happening in the Islamic State is only a more open version of what is already taking place in the West. Slavery has returned to America, not under the Confederate flag, but under the Saudi flag. The Muslim sex grooming in the UK does not come with its own flag, but with the Koran. And Muslims in this country continue to try and bring non-Muslim women out of this country to serve ISIS. 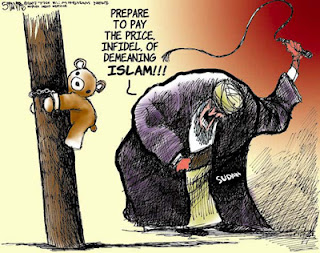 “According to Islam he is allowed to rape an unbeliever,” a twelve-year-old girl was told. “He said that by raping me, he is drawing closer to Allah.”

As Islam spreads across the West, we are all drawing closer to Allah. Portions of cities go dark and become no-go zones. Terrible things happen there that no one talks about. It’s important to talk about them. But it’s also important to talk about what ties together the little girls in the Islamic State and the United Kingdom, the slave trade of over a thousand years and Mohammed’s wives.

And that is Mohammed. Mohammed was a pig. We can and should say it. As many times as it takes. He is not a role model. He is not a prophet. It’s not the women who call him a pig who are sick and evil.

It’s those who imitate and defend his sick and evil ways.

Telling the truth about Mohammed is more than a statement. It’s not a mere provocation. It saves lives.

(This article originally appeared in another form at Front Page Magazine) – See more at: http://sultanknish.blogspot.com.au/2015/08/mohammed-was-pig.html#sthash.XCUmlwOy.dpuf

7 thoughts on “Muhammad Was a Pig”