The EU is breaking the law to import rape and jihad.

Uruguay: Syrian Refugees Complain the Hospitality Is Not Adequate

The five Syrian families welcomed into the Uruguay community last year have managed to turn off the entire country with their rude, demanding behavior.…| VDARE – premier news outlet…

A German village has released a list of ground rules for migrants covering matter of basic civility to fundamental western values.
BREITBART.COM

“Teenager” who pleaded guilty to weapons importation released on bail

What’s the point in calling a soldier of Allah who’s reached the fighting age of 19 a “teenager?”

Mehmet Azami (pictured), who has pleaded guilty to importing more than 300 weapons, was granted bail in a Melbourne court on Thursday after a judge heard…DAILYMAIL.CO.UK

Mohammedan kids opt out on anthem

By LACHLAN MOORHEAD A CRANBOURNE primary school raised eyebrows during an assembly last week when its Islamic students were given…
CRANBOURNENEWS.STARCOMMUNITY.COM.AU 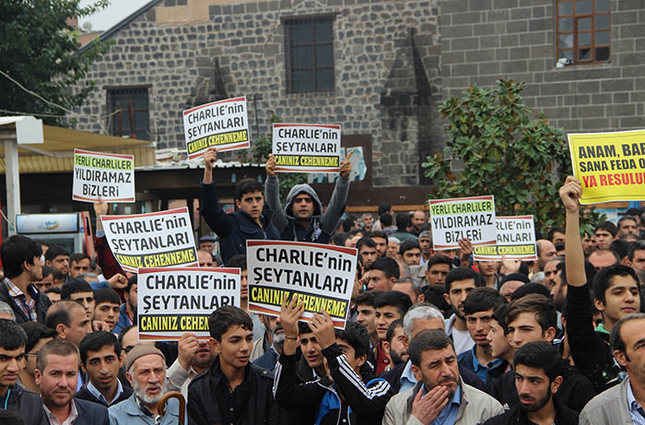 A group of activists staged a rally in the southeastern province of Diyarbakır on Friday against a cartoon depicting the Prophet Muhammad put up on billboards by a municipality in the Yenişehir district of the province.

The John D. and Catherine T. MacArthur Foundation has awarded $425,000 over two years for the development of SHARIAsource—an online Islamic law resource founded and directed by Harvard Law School Professor Intisar Rabb, who is also a Susan S. and Kenneth L. Wallach Professor at the Radcliffe Institute for Advanced Study at Harvard.

SHARIAsource is built on a model of broad collaboration, calling on the resources of the Harvard Law School Library, other educational institutions, and expert scholars of Islamic law around the world to build a clearinghouse that collects the research and highlights the expertise and scholarship of each. The initiative is housed at Harvard Law School’s Islamic Legal Studies Program and operates in partnership with Harvard’s Berkman Center for Internet & Society, bringing together the substantive and technical expertise of both communities with an “expert crowd-sourced model” with contributions from experts in Islamic law as well as scholars of comparative constitutional law, legal history, and other related fields.

The SHARIAsource team of legal experts, scholars, and developers is led by Editor-in-Chief Intisar Rabb. She shared the major news of the MacArthur award at a project convening conference last month, at which some thirty scholarly, policy, and media experts met to chart the future of SHARIAsource. This grant is in addition to $400,000 from the Henry R. Luce Foundation, announced late last spring.

“Professor Rabb’s vision and commitment are the driving force behind this important effort to share primary sources of Islamic law and expert commentary from around the world,” said Martha Minow, dean of Harvard Law School. “SHARIAsource is a flagship project for ILSP, and this superb grant will ensure its effective development.”

“Never has it been more important to present the public with accurate, well-documented historical evidence about Islamic law. With misconceptions abounding, Professor Rabb’s impressive project has much to teach us all,” said Lizabeth Cohen, dean of the Radcliffe Institute. “I congratulate her on this endorsement of her pathbreaking work and am proud to have her as a Radcliffe Professor at Harvard, in residence as a fellow at the Radcliffe Institute this academic year.”

“The Berkman Center is committed to rigorous scholarship, developing innovative tools, and facilitating public discourse in its many forms,” said Urs Gasser, Berkman’s executive director. “SHARIAsource, with its entrepreneurial spirit, is a great example of this, and the MacArthur Foundation’s generous support will help sustain this important endeavor.”

The MacArthur Foundation Grant will allow SHARIAsource to further facilitate advanced scholarship and policy analysis relating to Islamic law, and to grow its online repository of primary source material. SHARIAsource is in an intensive growth and development phase with a public launch expected in 2016.

Intisar Rabb said: “We were delighted to receive this funding from MacArthur because it ensures that the vision I and many of us have for SHARIAsource can take shape in ways that will inform important academic, policy, and public conversations about Islamic law. We are so excited to move forward together with the network of scholars, students, coders, and other contributors to this effort.”

For more information, see the summer profile of SHARIAsource in the Harvard Magazine:http://harvardmagazine.com/2015/05/debating-sharia-law-digitally (July–August 2015).

16 thoughts on “Pat Condell: The Invasion of Europe”