After a terrorist rammed his car into a crowded Jerusalem bus stop on Monday, ‘moderate‘ ‘Palestinian‘ President Mahmoud Abbas  Abu Mazenjustified the terror, saying that it was part of a ‘justified popular uprising.’

“We cannot ask the youth why they are going out (to revolt),” Abbas said in Ramallah. “They just despaired of the two-state solution.”–(Israel Matzav)

More Lies from Abbas about The “Intifada”

We still have never encountered even one case where a terrorist complained about the absence of a two-state solution. Also, contrary to Abbas’s claim, none of the terrorists has ever complained about checkpoints or settlements.

This latest wave of terrorism is not about “despair,” unemployment, poor living conditions or freedom of movement. Instead, it is another attempt by Palestinian “youths” to eliminate Israel, again using the false excuse that Jews are “desecrating” and “destroying” Islamic holy sites.

A review of the Facebook accounts of most of the terrorists shows that their main intention was to murder as many Jews as possible in order to become “martyrs” — to impose a reign of terror Jews, to force them to leave Israel.

.
Abbas is well aware that the “youths” are not complaining about the “occupation.” The “occupation” these ” youths” have a problem with is the one that began with the creation of Israel in 1948.

.
A new generation of Palestinians has once again been deceived into believing that the Jews are plotting to destroy the Al-Aqsa Mosque. The Al-Aqsa Mosque stands, as always, unharmed in its place.

It is a sorry sign of how intolerant of minorities were the theologians of the al-Maliki school of Islam in the Maghreb until the colonial era, that the first thing they published when the printing press came to Morocco in the 19th century, was not a scientific tract, or even the Koran, but the Epistle against the Jews which al-Maghili wrote to the chieftains of Touat five centuries earlier.

.
Maghreb theologians preserved a strict interpretation of the dhimmi laws which governed the relationship of Jews and Muslims under the 8th century Pact of Omar. The prophet Muhammad had spared the lives of the defeated Jews and Christians as ‘People of the Book’, rather than put them to the sword, but they had to abide by rules denoting their subjugation and inferiority to Muslims.

.
Following codification in the 13th century by the literalist theologian Ibn Taymiyya, ‘Dhimmi’ acquired a precise meaning in Islamic jurisprudence: non-Muslims would be ‘protected’ by Muslims in return for a capitation or poll tax. This begs the question – protected against whom?
Violent mobs singled out the Jewish ‘Other’ for attack and looting. Jews would ‘cop it’ at times of political turmoil or trouble.

.
Jews could not build new synagogues or repair them without permission; they had to allow Muslims to enter them at will. Jewish homes had sometimes to be painted red or blue, even after Jews had been permitted in modern times to move out of the Jewish mellah into the medina.

.
Jews were forbidden from teaching their children the Koran. This was to prevent Jews engaging in theological polemics with Muslims.
Jews had to wear special badges and black attire. A Jew’s djellaba was worn awkwardly ‘off the shoulder’ for maximum discomfort. Jews were not permitted to blow the ram’s horn (shofar) in a public place. The Palestinian Mufti of Jerusalem would use this pretext to incite anti-Jewish riots in 1929. 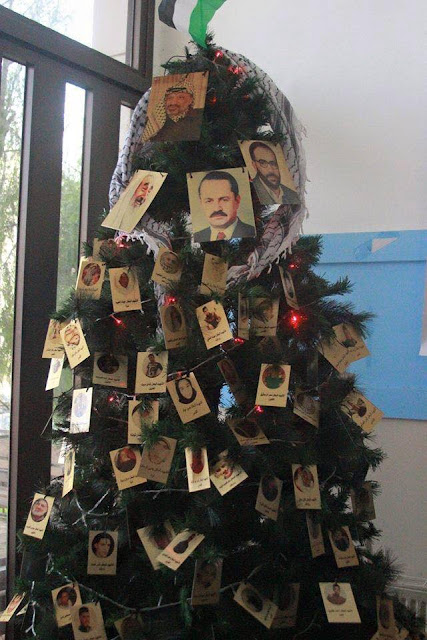 As its contribution to the Christmas spirit at Birzeit University near Ramallah, Fatah’s student movement Shabiba decorated a Christmas tree with pictures of “Martyrs” – among them terrorist murderer Muhannad Halabi who recently stabbed and killed two Israeli civilians in Jerusalem.

One thought on “‘Justified popular uprising’”