We have ways to make you care:

Senior PA official: ‘Do we have to hijack planes for you to care about our cause?’
.
A senior Palestinian Authority official has suggested that the West ignores the Palestinians when they maintain security, rhetorically asking if they have to resort to “hijacking planes” and “destroying airports” to garner Western support for the Palestinian cause.
In an interview translated by MEMRI on the PA-backed station Awdha TV last week, Nabil Sha’ath asserted that being moderate does not turn heads.
.
He sought to substantiate his claim by drawing attention to the ongoing refugee situation in Europe: “If the Syrian problem had not been exported to Europe – through refugees, on the one hand, and terrorism, on the other – the Europeans would not have cared even if the entire Syrian people had died.”
.
Sha’ath stated that the European decision to finally deal with the Syrian crisis was not motivated by good-willed humanitarianism, but rather by a fear that the massive influx of “non-Anglo-Saxon” refugees would alter the composition of the population.
.
“But when all of a sudden there were four million Syrian refugees in Europe, and when this was accompanied by ISIS operations in France and elsewhere…it started a debate about racial transformation, the entrance of non-white, non-European races,” he said in the interview.Nabil Shaath on International Peace Conference: Anything Is Better than U.S.-Led Negotiations 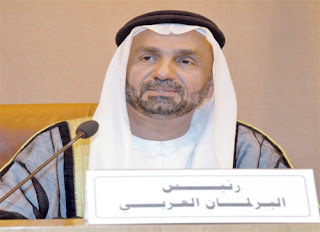 The President of the Arab Parliament, Ahmed al-Jarwan, has written a letter to UN Secretary General Ban Ki Moon thanking him for his justification of Palestinian terrorism in his New York Times op-ed entitled “Don’t Shoot the Messenger, Israel.”

Arab media reports the PLO’s representative to the Arab Parliament said that that Jarwan praised Ban Ki-Moon’s article for asserting “the right of all peoples of the world to resist occupation, including the Palestinian people” and that this “right” cannot in any way be taken away.

Ban’s article did not say that, but it is telling that this is how the article – which the UN insists was a condemnation of terror – is being interpreted by Arab leaders.

But lets inject a little sanity into this madness, shall we?

Tomorrow when you attend synagogue to mark International Holocaust Remembrance Day—after two weeks when you singled out Israel at the Security Council and in the New York Times—I hope you will pay heed to the following verses of Exodus in the weekly Bible portion that will be read out before the congregation:

.
“Do not spread a false report… Do not follow the crowd to do evil; neither shall you testify in a dispute by siding with the multitude to pervert justice.” (Exodus XXIII)

.
As you begin your 10th year as Secretary-General of the United Nations, I hope you reflect upon these words, and on how your conduct has changed over time.

.
Because I remember when, during your first year in office, in 2007, you admirably criticized the Human Rights Council after it decided to permanently single out Israel under a special agenda item at every one of its meetings. You were sharply rebuked for this by the 56-strong Islamic group.

.
Today, perhaps because you have been stung by such rebukes from the multitude that dominates your organization—including the 120-strong Non-Aligned Movement, now chaired by Iran—too often your own actions, and those carried out by U.N. officials under your command, spread false reports, follow the crowd to do evil, and deliver testimony that perverts justice.

.
Mr. Secretary-General, your op-ed was entitled “Don’t shoot the messenger, Israel.” Perhaps you ought to consider that the U.N. is not a messenger here, but a key actor; and that, too often, your organization’s actions encourage, enable and legitimize terrorism.
If you unequivocally condemn terrorism that strikes French, American, and Nigerian victims, without expressing sympathy and understanding with the alleged grievances of the murderers, you should do no different when the victims are Israelis.

.
I conclude again with the words of the Bible:
“Do not spread a false report… Do not follow the crowd to do evil; neither shall you testify in a dispute by siding with the multitude to pervert justice.”

One thought on “PA official: ‘Do we have to hijack planes for you to care about our cause?’”