The following article by Hans-Peter Raddatz analyzes the process of the Islamization of Europe. It was originally published in the Austrian daily Die Presse, and has been translated by Rembrandt Clancy, who also provides endnotes explaining some of the references in the essay. 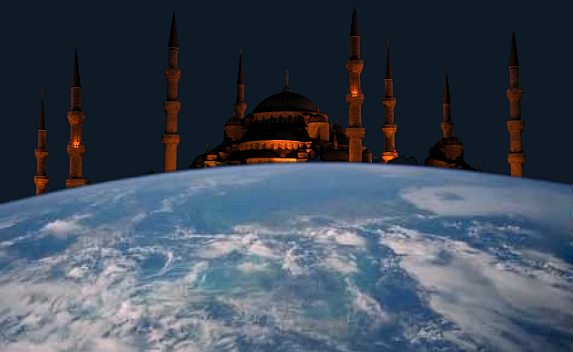 Dr. Hans Peter Raddatz was born in 1941. His specialities are Middle Eastern and Oriental studies and Economics. After being active for many years representing the interests of international banks in the Near East, he wrote numerous books on the fundamentals of globalisation, Islam and the Islamisation of the West. He has made contributions to the Encyclopaedia of Islam and has translated Bat Ye’or’s Europe, Globalization, and the Coming of the Universal Caliphate, providing it with a commentary (cf. Gates of Vienna).

Note: Quotations in this article from the Koran are taken directly from the English language edition by N. J. Dawood (Penguin, 1974).

According to the credo of those in power, the importing of Islam can only enrich, fertilise and renovate European societies. Anyone who doubts that is immediately marginalised as “racist” and “fascist”.

With the attacks in Paris and Brussels and with the influx of people from the Middle East, the political-social landscape of Europe is once more in lasting turmoil. In this connection and in view of the reflexive din in the media, it seems useful to stand back and take into account the “persons responsible” for the events, to look at the functional elites [politicians, media specialists, academics etc.] in the institutions and their behaviour patterns.

For it has long been apparent that there is a facile narrowness in the public parties to the discussion, who use a unidimensional, hackneyed speech and become aggressive as soon as criticism of their project for the Islamisation of Europe begins to stir. This is particularly so since the EU, in concert with the Mecca Manifesto of the Organisation of Islamic Cooperation (OIC) of 2005, declared Islam the “partner of Europe” [Miteigner Europas] (Bat Ye’or, Europe, Globalization, and the Coming of the Universal Caliphate).[1]

Deprivation of Rights and Expropriation

The document regulates the spread of Islam, which, together with mosque networks, assassinations in Europe, persecution of Christians in the Middle East, the use of European leaders and actions against Israel, strictly follows the Koran.

Thus for the functional elites, “cultural dialogue” serves as propaganda for an Islam-diktat, which imposes on EU citizens a general renunciation of “vested rights” dressed up as tolerance. By this is meant the removal of rights to civic co-determination, rights to participatory influence on the common good and the right to a share in the disposition of state assets, all of which had been worked out during the building of the postwar democracies; and which now, in Austria and Germany alike, are being dissolved consistently to the benefit of the Muslim “partners”.

Critics among the public are concerned with the question of how in a democracy such expropriation and deprivation of civil rights is justifiable, while at the same time “those responsible” identify the demand for a voice in an election programme as “incitement to hatred”. For its part, this radicalisation enforces the pithy typecasting of emotive clichés and thought prohibitions, which in the single-lens reflex of the people’s representatives and at the levels of institutional leadership naturally comes into view as “democratic” politics.

When the Pope kisses the feet of Muslims and recommends a “proper reading of the Koran” to his “faithful”, he equalises everything down to the same level as much as the sham-secular propaganda cadres in the institutions, whose credo smoothens Islam out on a plane between “religion of peace” and “cradle of science”. Since Islamic violence is deemed “abuse of faith”, Europe’s totalitarian tradition can be rehabilitated by protecting the Koranic licence to power under freedom of religion.

That framework was followed by the German Minister of the Interior, according to whom “the capture of Islamic assassins increases the danger of terrorism” (Phoenix, 24.3.), for it is known that these acts do not come from the terrorists but from Allah [for] “it was not you who slew them: Allah smote them…” (Koran. 8:17).

Everything becomes New and Different

That “not all” Muslims are terrorists, forms the invertible protective formula for the warding off of “general suspicion”, which for all Muslims, whether terrorists or not, secures their jihad as “perseverance in faith”, especially since they are “the noblest nation that has ever been raised up for mankind” [Koran. 3:110]. In this way the Islam-key opens up for the functional elites the fullness of modern transformation by virtue of everything becoming new and “above all different”.

Rejection of tradition brings with it the disappearance of the “old” thinking, the latter having made freedom of rejection possible in the first place, and replaces it with defamation, which is what weak-thinking personnel promote. According to their tunnel logic, with the importation of Islam, European society can enrich, fertilise and renew itself in every respect; hence it is not entitled to any kind of proof.

Enforced in such a way, this success persuades the protagonists of their membership in a favoured class or race and conditions them to attack, as “racists”, those citizens who complain about the increase in the criminal offences of Muslims.

END_OF_DOCUMENT_TOKEN_TO_BE_REPLACED

One thought on “Europe’s Elites, the EUSSR and Islam”