France’s Education minister, Najat Vallaud Belkacem, has revealed that Arabic will be taught to primary school aged children as an elective.

French education minister has introduced a plan to include Arabic as an elective subject amongst five other language choices for children in schools. “Arabic will be taught in primary schools if the human resources are there and if parents ask for it,” the Minister told French broadcaster BFM on Tuesday.

Vallaud-Belkacem’s words have outraged a number of French politicians, who have harshly critcised the minister a public tongue lashing.–World Bulletin / News Desk

Somehow, the French don’t understand the language of the religion of peace:

Stupid is as stupid does:

thanks to Carl in J’lem 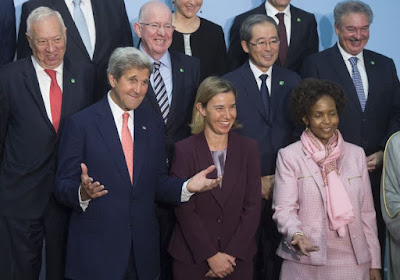 With 500,000 Syrians dead and millions more homeless, the Obama administration and Europe turned to the real priority today: The ‘Palestinians.’ At a ‘peace conference’ whose outcome is predetermined (host France has already announced that if Israel does not agree to a ‘Palestinian state,’ France will), John Kerry, Federica Mog and friends urged Israel to ‘accept’ the division of the remaining 22% of the British Mandate that is currently called Israel. There are only two problems: Israel didn’t show up and neither did the ‘Palestinians.’

Among the participants will be US Secretary of State John Kerry, UN Secretary-General Ban Ki-moon and EU Foreign policy chief Federica Mogherini, and representatives from the Arab League. Although Russia, Germany, Britain and Japan will be among the 26 representations at the conference, they will not be represented by their foreign ministers.

Following an opening statement by Hollande, each representative is expected to make a statement on the primacy of Middle East peace and the importance of retaining the possibility of the two state solution.

The conference is expected to conclude with a press conference where conclusions – worked upon by the delegations on Thursday night – will be presented. The summit will be the first international gathering on the Middle East peace process since then US President George Bush convened the Annapolis conference in 2007. Both Israel and the Palestinians were invited to that parley.

The meeting’s initial focus is to reaffirm existing international texts and resolutions that are based on achieving a Palestinian State in the West Bank and Gaza Strip co-existing with Israel, an outcome the French said in a pre-summit document is increasingly coming under threat.

That document blamed the threat to the two-state solution primarily on settlement activity, without mentioning Palestinian violence, the Hamas-Fatah split, or the consistent Palestinian refusal to recognize Israel as the nation state of the Jewish people.

However, French Foreign Minister Jean-Marc Ayrault said in a Le Monde interview that in order for there to be an agreement, the Palestinians needed reconciliation between Hamas in Gaza and Fatah in the West Bank, and that Hamas needed to take the first step by recognizing Israel, accepting previous Israeli-Palestinian agreements, and forswearing violence.

The Paris meeting will try to establish working groups comprising various countries that would meet in the coming months and tackle all aspects of the peace process.

Some groups would strive to creating economic incentives and security guarantees to convince both sides to return to talks. Others would focus on trying to find ways to break deadlocks that scuttled previous negotiations or look at whether other peace efforts such as a 2002 Arab initiative remain viable.

“France isn’t trying to reinvent things that already are out there. The idea is to rebuild confidence and convince everybody to work together to find a way to get to the next conference,” a senior french diplomat said. He said the objective was to get Israelis and Palestinians back together after the U.S. elections.