Thanks to Gallia Watch & Vlad Tepes

Nothing is more explosive than a forbidden truth. 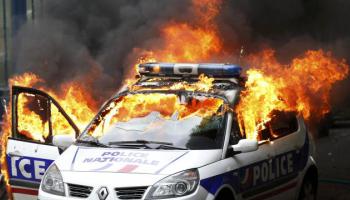 The ethnic dimensions of the conflict are hidden because they are too obvious, hence too dangerous. The ethnic and racist, but also subversive and invasive aspects of this criminality and this permanent violence, are as important as the extortionist motivations. 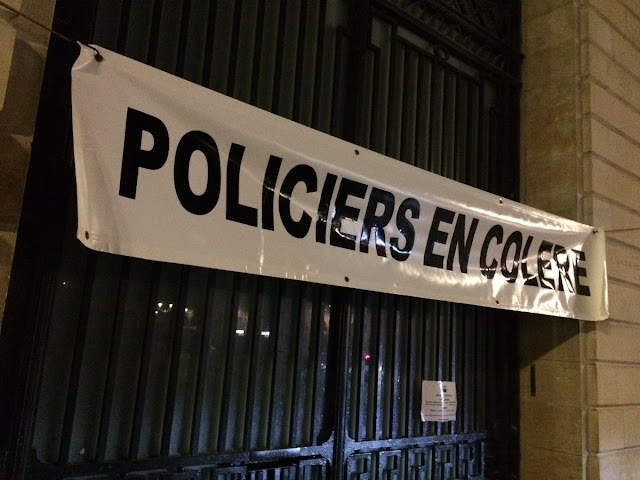 On October 10 I posted a brief article with a link to the Daily Mail about an attack on four police officers in Viry-Châtillon, department of l’Essonne. The Daily Mail had reported:

Four French police officers were set on fire after masked thugs pelted their two cars with petrol bombs during a patrol on a notorious housing estate near Paris.

The horrifying attack took place on the Grande Borne, in the southern Paris suburb of Viry-Chatillon, on Saturday afternoon.

“The cars were parked up on the estate as a part of a surveillance patrol monitoring a surveillance camera near a set of traffic lights,” said a police source, who said the violence started just before 3pm.

“They were attacked from all sides. Assailants in a group of around a dozen threw Molotov cocktails at the car.

Two of the officers were very badly burned and rushed to intensive care units. Two others received hospital treatment.

The other officers hurt managed to call reinforcements who turned up to secure the area.” (…) 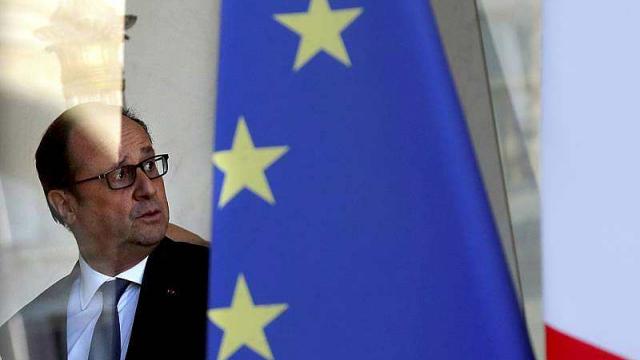 What are we to think when a major world leader tells the bald unvarnished truth? When this leader is also a committed socialist, with little or no interest in the historic country he rules, no attachment to its spiritual and cultural heritage, no desire to protect and defend it, when he boasts a long record of collaboration with his country’s enemies, both at home and abroad, and a reputation for evading anything that remotely resembles the truth, it is all the more astonishing and bewildering.

But François Hollande has told the truth, or some truths, and in so doing exonerates all those who have been persecuted for telling the same truth! Astonishing as that is, the reactions from members of the press are even more mind-boggling, because they say openly, and possibly without realizing what they’re saying, that he has told the truth! So they know the truth when they hear it!

To whom did “Moi, President” utter these words? To two journalists from Le Monde, a government-subsidized newspaper of great prestige and diminishing readership, in a book entitled Un Président ne devrait pas dire ça… (A president should not say that…).

This improbable story appears at several sites. The following is adapted from an article at Riposte Laïque, signed Marcus Graven:

What did little François say?

On the justice system:

“This institution is an institution of cowardice… That’s what it is, all these prosecutors, high magistrates, they hide, they play at being virtuous… they don’t like politics. Justice does not like politics…”.

Note: The magistrates’ union expressed outrage at these remarks, and Hollande said he “deeply regretted” having hurt them. The joke is: what he said is TRUE, but it is because of the governments, past and present, that the Justice system became corrupted, hiding behind a façade of virtue, as hardened criminals were released on a daily basis and an 80-year old man who defended himself was taken into custody (to name one injustice out of thousands).

On the identity crisis:

“When you read Finkielkraut, Zemmour, Houellebecq, what does it convey to you? Always the same thing: Christianity, history, identity confronted with an Arab-Muslim world that is coming…That’s what makes people panic, it’s not because they lost 3% of their purchasing power – in fact, they didn’t lose it – or because they are unemployed. There are things that eat away at people, they get in a train, they see bearded men, people reading the Koran, veiled women…”

Note: Hollande is similar to a statistician, not a trace of feeling is betrayed in his accurate depiction of what his countrymen go through every day because of him.

“Cultural insecurity is not a feeling.”

Note: I assume he means it is a reality, not a fantasy.

“There are, simultaneously, things that work very well and an accumulation of potential bombs linked to an immigration that continues. Because it continues.”

On the French soccer team:

“It is in the throes of becoming an ethnic community, segmented. There is no attachment to this French team. There are guys from the ghettos, with no frame of reference, no values, who left France too soon.”

On the soccer players:

“They went from being poorly educated kids to being rich stars, with no preparation. They’re not prepared psychologically for knowing what is right, what is wrong. The Federation shouldn’t so much organize their training as their education. It’s about the muscles of the brain.”

Note: The above two statements refer to the well-publicized bad behavior of the “French” soccer team, who boo the Marseillaise, generate violence, accuse coaches of racism, etc… Hollande recognizes their uncivilized behavior but never questions their presence in France or on the team.

On Benzema he says:

“Morally, he is not an example.”

Note: Algerian-born Karim Benzema accused his coach of racism when he was not selected for the national soccer team. Those interested can read more at NPR.

“I’m convinced that, if you asked the French people, a majority of them would be on her side (i.e, Nadine Morano, who quoted on television General de Gaulle’s comment about France being white, European and Christian.) (…) They think: ‘We are mostly white, there are more whites here than others.'”

Note: Nadine Morano, a member of Sarkozy’s LR party is again in the news for almost coming to blows with Rachid Nekkaz, a millionaire Algerian who pays the fines of Muslim women caught wearing veils.

“I think there are too many newcomers, too much immigration that shouldn’t be there.”

“We can’t continue having migrants who come here with no controls, especially now that there are attacks.”

On classrooms filled with children from North and sub-Saharan Africa:

“It’s the myth of Sisyphus! We teach them to speak French, then another groups arrives, and it all starts over again.It never stops (…). So, at some point it will have to stop.”

“That there is a problem with Islam, it’s true. No one can doubt it.”

On the lawless zones of France:

“How can we avoid a partition? Because that is what is happening: a partition.”

Note: An important admission – there are after all areas of France that are no longer part of the Republic.

“A group of intelligent people can make an idiotic crowd.”

The author of the article sums up his thoughts:

For all the good souls of the left, the center, the right, for all the politicians, for all the journalists, the “liberated” words of Hollande bring an ill wind. Their own permanent lies, their desire to deceive the French people, are now blatantly clear.

His words are an admission that once sheltered from the public eye, behind the walls of power, the rulers know very well the dramatic situation in the country. His words prove that the so-called “fascists” who denounce the hypocrisy of the rulers is justified, and that the criticism of the magistrates is well-founded. His words prove that the virtue of the ruling elite is a mask, that to knowingly refuse reality is the only way to stay in power for these “little men”, all cut from the same pattern, all shouting: “There are no no-go zones”, “Islam is not the problem”, “Migrants are an opportunity for France.”

And when one of them, like Hollande, tells the truth (perhaps without meaning to), they close ranks, turn away, and deny what he said.

But the dam is beginning to break, the brainwashing is losing strength, misinformation is falling to pieces. Let’s hope the French will wake up completely.

Here are some reactions from the international press as reported by Courrier International:

“What the devil got into François Hollande for him to affirm things that radically reduce his chances, already slim, of being re-elected? His words could have come out of the mouth of his worst enemy, or of a comedian. The conservatives could not ask for anything better.” (…)

From the Spanish publication El Confidencial:

“What is said over a bottle of wine and a plate of sausages to two professionals converted into confidants should always be off the record and should not, as it seems to be the case, be ‘on the rocks’. No one understands the president. His colleagues are concerned, his future political allies humiliated, while the right rejoices.” (…)

Note: Again we see that the media know he is telling the truth, they just don’t know why.

The Catalan publication La Vanguardia compares the 661-page book to a “suicidal compilation” in which the president appears as a “ridiculous commentator about himself”:

“Why suicidal? By his openness and his idiotic sincerity incompatible with the position he occupies. Hollande agreed to suicidal conditions with the two journalists, Gérard Davet and Fabrice Lhomme: interviews recorded over a five-year period, completely sincere, without press advisors, without the right to correct or to review. It is a reasonable format for an ex-president, but absolutely incompatible with the presidential function that presupposes omission, lies, and playing a role. (…) The image that comes out of this insignificant tome of 661 pages is not one of courage but one of stupidity.” (…)

The Russian daily Vzgliad condemns Hollande, but does itself no honor either:

“The book presents to the world a completely different face of the French president: not the politically correct progressive Euro-Socialist who fights for the freedom of oppressed minorities, but an ordinary petit bourgeois loaded with the full gamut of xenophobic and racist stereotypes.”

Note: In other words, Hollande should join the Front National! And note how Vzgliad regards political correctness as a virtue!

We could spend hours discussing not just the words of Hollande, but the hypocritical reactions of these European newspapers. However, I’ll leave it to you to ponder the motives for François Hollande’s sudden Freudian slips, if slips they are.

Also, since I have not read the book, I cannot verify the context in which these comments occur. There is always a chance they come across differently when read in context.

My first thought was that he wanted to shock people into voting for him again. My second thought was that he wanted to shock people into not voting for him, because he doesn’t want to win. He has admitted in an article in Le Figaro that the job was much more difficult than he knew. Of course it was more difficult – he made it more difficult by not ruling justly, by adopting bad policies. The country suffers the consequences, while he, though exhausted, cannot change his course, despite his admissions. Incredible. My final thought is that he is notdivorced from reality. He is paralyzed, and cannot amend his ways because he has to be true to the leftist agenda that has been set into motion inexorably. He is part of that inexorable march into the night and he goes, knowing it’s a catastrophe, unable to liberate himself from the gears in which he is trapped, a prisoner of his own inflexibility, and he takes the country with him.

He seems so close to a radical transformation, yet does anyone really believe that could happen?

Whatever his motives, I’m delighted he let the cat out of the bag.