‘People are fed up with political correctness’

George Brandis launches an extraordinary attack against the Human Rights Commission as he blasts some Senate crossbenchers for not supporting the government’s 18C changes.

Attorney-General George Brandis has launched an extraordinary attack against the Australian Human Rights Commission as he blasts as “disgraceful” the decision by some Senate crossbenchers not to support the government’s changes to section 18C of the Racial Discrimination Act.

Senator Brandis had a meeting with Nick Xenophon last night and will see him again today as he attempts to “persuade” him to back definitional changes to Section 18C, which would replace the words “offend”, “insult” and “humiliate” with “harass”.

The government will need support from the bloc of three Nick Xenophon Team senators if its Human Rights Legislation Amendment Bill is to pass the parliament in its current form, but so far the minor party has rejected the change.

“It is disgraceful that Labor and the Greens and some of the Senate crossbench have decided not to support this legislation but think about where we’ve got to in this country where a political cartoonist gets persecuted for publishing a provocative but important cartoon,” Senator Brandis told 2GB radio.

“Where a newspaper columnist gets a finding against him for writing a provocative article. Where undergraduate students at a university get persecuted because one of them makes a wisecrack. This is out of control and people are fed up to the back teeth with political correctness and I’m proud the government is standing up against political correctness and the development of this culture of grievance that people on the left are invested in promoting.”

Senator Brandis also hit out at the “nobodies” at the AHRC, declaring he did not want Australia to turn into a country where the commission’s officials could control people’s speech.

He said cartoonists, newspaper columnists and the average man in the street should not be the “subject of government regulation or some intrusive moral guardian at the Human Rights Commission who thinks that it’s their god given right — they probably don’t believe in God — but it’s their right to tell other Australians what they’re allowed to think and say”. 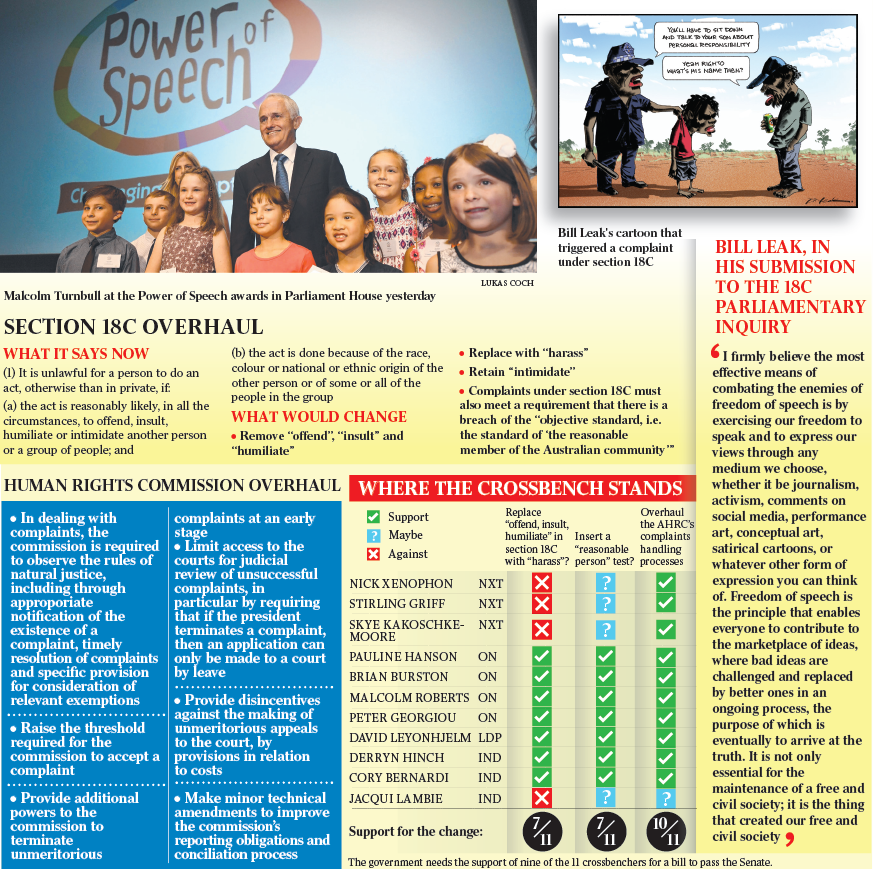 Without the support of Labor or the Greens, the government needs to win over nine of the 11 Senate crossbenchers for its bill to become law.

Only seven of the crossbenchers back its proposal to change the wording of section 18C but ten are for an overhaul of the AHRC.

“I will talk to Nick and his colleagues and I will be imploring him to remember that freedom of speech is one of the absolute core values of Australian democracy and there is nothing, nothing in the legislation that the government is proposing that people should be concerned about,” Senator Brandis said.

“In fact it strengthens the anti-vilification provisions of the legislation because what sort of an anti-racial vilification Act is it that doesn’t outlaw racial harassment? That’s why the government is taking out the anti-freedom of speech words but it’s putting in a much stronger protection by saying it isn’t lawful to racially harass people. Why wouldn’t we want to do that?

“Nick and I are good friends and we have got a lot of good outcomes … since the 2016 election.”

Senator Brandis declined to say what Senator Xenophon’s concerns about the bill were.

We need to call out the cynical way in which Labor and the Greens are seeking to use the 18C issue to inflame divisive race-based debate for political purposes. They are deliberately misrepresenting the aims of the proposed changes to the Racial Discrimination Act as somehow giving a “green light” to racism. This is dishonest and irresponsible.

“As someone who has been subjected to racism time and time again — as I was growing up, and even in my life now — please give me an answer: what exactly does the Prime Minister want people to be able to say that they cannot say now?” asked Labor’s Anne Aly. “PM, what changed between then and now, what insults do you want people to be allowed to say?” asked Bill Shorten.

Both Shorten and Aly know the proposed changes will keep section 18C on the statute books so that racial vilification will still be outlawed in this nation under federal law (along with a range of complementary state laws against abuse, threats and vilification, and other protections such as defamation and obscenity laws).

They know the reforms proposed by the government aim only to prevent the repetition of clear cases of overreach against free speech. Queensland University of Technology students were put through a tortuous, stressful and expensive three year legal process, changing the course of their lives, for making comments that were not, by any objective test, either racist or offensive. And this newspaper’s recently deceased editorial cartoonist Bill Leak was pursued and publicly shamed over claims of racism when he was doing what he did best; drawing national attention to an issue of national concern, namely the abominable disadvantage and dysfunction confronting indigenous youth.

The 18C reforms proposed by Malcolm Turnbull aim to eradicate authoritarian overreach against individuals in a free society. They aim to limit instances of unfair and unwarranted institutional intrusions into people’s lives.

Yet Labor and the Greens seek to portray this as unleashing some racist dystopia in our country. They must have an extremely low opinion of mainstream Australians.

They must think people in the suburbs and regions are champing at the bit to throw off the shackles of a few words in a piece of legislation so that they can launch racist abuse at their neighbours. What rot.

The greatest weapon and most consistently effective measure in combating racism is the daily imposition of reasonable standards by the overwhelming majority of tolerant, fair-minded people in their daily lives. No change to the law will alter this reality.

A more sensible limit on the intrusions of the Australian Human Rights Commission — which has styled itself as some sort of thought police squad — can only be seen as a vote of faith in the good sense of the public.

Perversely, many members of the media have joined Labor and the Greens in their opposition to these reforms. This is astounding behaviour from journalists who would be expected to show a bias in favour of free speech.

But then we shouldn’t be surprised. So partisan have many of them become that they supported Labor and the Greens five years ago when they proposed de facto regulation of print media content.

If Turnbull’s amendments are passed, racial vilification will still be against the law. Shorten and Aly know this — why do they pretend otherwise? And in the here and now, racial vilification laws do not prevent the racist mutterings of a tiny minority of individuals; they never will.

Changing the law to prevent overreach and the unfair persecution of people like Leak and the QUT students will not give anyone a new licence for hate. In fact if the changes are passed by parliament, no one should notice anything. The only ramifications should be to decrease the future likelihood of odious overreach by the AHRC.

When politicians and analysts say the Coalition could lose marginal seats because of this proposal, what they are really saying is that Labor will run disingenuous campaigns in these seats pretending that the government is giving a nod to racism.

If Labor runs such deliberately divisive campaigns and seeks to win votes on the back of misleading claims about racism and intolerance it will be a lie that puts the Mediscare stunt to shame.

It will be no less dishonest and even more damaging to the national project. It will be an attempt to foment racial disharmony for political gain; a tactic that by definition would be racist.

We need to call out the cynical way in which Labor and the Greens are seeking to use the 18C issue to inflame divisive race-based debate for political purposes. They are deliberately misrepresenting the aims of the proposed changes to the…
AT.THEAUSTRALIAN.COM.AU