Marrying someone older than your mother is “audacious?” Macron is despicable. My relatives, who fought valiantly in Algeria must be turning in their graves. Here, he declares them all criminals:

Macron calls colonisation a ‘crime against humanity’ in Algeria interview

French presidential frontrunner Emmanuel Macron drew a storm of criticism on Wednesday after calling France’s colonisation a “crime against humanity” during a visit to Algeria.

In an interview in Algiers with private owned TV Echourouk News, Macron said that colonisation was “genuinely barbaric, and constitutes a part of our past that we have to confront by also apologising to those against whom we committed these acts”.

His rivals on the right for the French presidency pounced on the comments.

Les Républicains candidate François Fillon denounced what he called “this hatred of our history, this perpetual repentance that is unworthy of a candidate for the presidency of the republic”.

Wallerand de Saint-Just, an official in Marine Le Pen’s far-right National Front party, accused Macron of “shooting France in the back”, while Gerald Darmanin, an ally of ex-president Nicolas Sarkozy, tweeted “Shame on Emmanuel Macron for insulting France while abroad”.

Macron, the Multicultural Destroyer of France

The push to make Emmanuel Macron the next president is accelerating dramatically as political luminaries rally to his side. Including former Prime minister Manuel Valls.

While the MSM press spares no effort to promote, however discretely, Macron’s image, the patriots are experiencing genuine fear of a Macron victory. Despite the popularity of Marine Le Pen, an energized Macron is appealing to the immigrants as did François Hollande five years ago. What worked then, could very well work again.

There are all kinds of rumors regarding this election, but I prefer not to waste time on articles that aren’t reliable. Remember, Saturday was April Fool’s and the French are very talented at creating completely plausible, yet totally false, tales of political intrigue.

The following from Jacques Guillemain, writing at Riposte Laïque, recounts the appearance in Marseille on Saturday April 1 of Emmanuel Macron. But this is no joke. Macron pulls out the standardized ode to multiculturalism, his voice rising in pitch until the final “I see Frenchmen!” that blows the crowd away:

In Marseille, Macron shouted his lungs out as he showed us his true concept of the France of tomorrow. He is a veritable grave-digger of the nation, a destroyer of our identity, the slayer of our Judeo-Christian roots.

Those intoxicated by his youth and his rhetoric of renewal, must understand that he wants to make a clean slate of our cultural heritage and turn France into a salmagundi of disparate peoples, so different from each other they will never be able to share a common future. France will be submerged.

Macron will cause our millenia-old France to disintegrate. He will destroy two thousand years of history in one five-year term. He has completely lost his mind. His election will cause an unprecedented detonation in the country from which it will never recover.

His immigration policy will be a one-way ticket to our disappearance.

In less than five minutes, he demolished the cultural heritage bequeathed to us by our ancestors.

He liquidated, without flinching, the France that we love and that our ancestors built through the centuries with their blood and tears. Our identity, our culture, our customs and traditions, our historical heritage were swept away as if they had never existed. The France of the past is of no interest to him. Globalism and multiculturalism have become his obsessions.

Note: Below, in italics, is the excerpt in the video. He begins each sentence with “être patriot”, “to be patriotic”. Note too that at the bottom of the screen image above is this quote from Macron: “We are the profound rotation of power, patriots open to a world that is changing, and that is why they hate us.” For Macron the rotation of power is inevitable and cannot be stopped. It is not as if the people have a choice. The people are following a destiny that has been prepared for them.

“When I look at Marseille, I see a French city created by two thousand years of history, of immigration, of Europe….”

This is like saying that the France of 2022 will be unrecognizable, with an Illuminati who wants to follow in the footsteps of Merkel and welcome the entire planet.

Macron is dangerous. He will blow society apart, while integration is already a failure.

France is going to be sacrificed on the altar of the Utopian agenda of the great world village.

With Macron, France will reach the end of her history.

Note: We should take the author seriously, and at the same time remember that 1) Macron may lose and 2) if France is blown apart, it may open the way to a rebuilding. To rebuild from the ashes is also the way of the world. 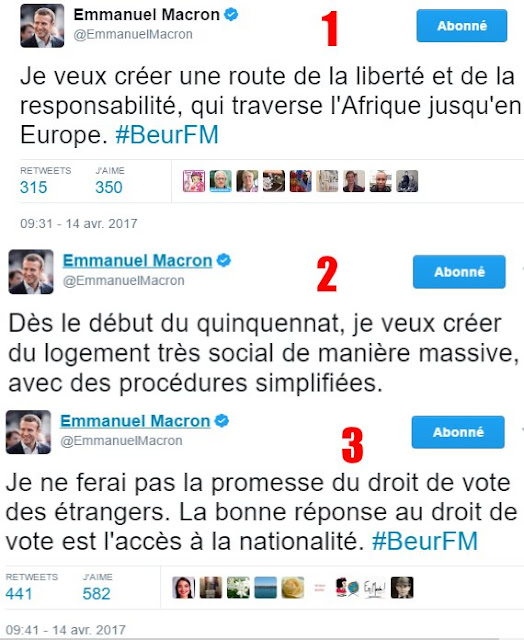 1 – I want to create a highway of freedom and responsibility that crosses Africa into Europe.

2 – From the beginning of my five-year mandate, I want to create very social housing on a massive scale using simplified procedures.

According to Le Salon Beige, if Macron wins, the Great Replacement is assured.

3 thoughts on “Macron, the Multicultural Destroyer of France”