Bear in mind that this is just one report from Bavaria, a state in southern Germany. This destruction is going on all over Europe, wherever Mohammedans have settled, behind, what they perceive to be enemy lines. The damage is immeasurable, and the pope calls for more of these invaders in the name of … what exactly? 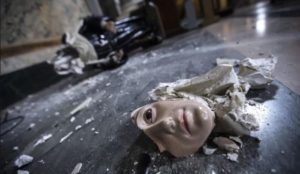 “Germany: Two hundred churches damaged and Christian symbols destroyed in just one region,” Voice of Europe, November 14, 2017 (thanks to The Religion of Peace):

In a rare candid moment, German media reported at least 200 cases of damaged churches in the region of Bavaria alone every year.

In addition, attacks on summit crosses are also increasing in the region’s mountains. Crosses on several mountain tops have been toppled and destroyed with axes or saws.

There’s a growing anger among the indigenous German population over the attacks. Some people think Islamists are behind it.

But the attacks on churches and summit crosses are not isolated cases; for months, attacks on Christian symbols have been reported from several Bavarian cantons.

There have been reports of desecration from Pentecost, Längental and from the “Prinzkopf” which lies between Sylvensteinstausee and Tyrol.

Some repairs of historic churches can cost tens of thousands of euros. It’s an attack on people’s faith and communities suspect there is a religious motive behind it, e.g. Muslim migrants might be trying to sow fear in the population.

A recent surge in stabbings and knife-related violence across Germany is drawing renewed attention to the deteriorating security situation there since Chancellor Angela Merkel’s 2015 decision to allow in more than a million migrants from Africa, Asia and the Middle East.–Continue Reading Article

Germany was blind when those things happened to the folloing peoples:
-Bosnian Croats
-Bosnian Serbs
-Kosovo Serbs
-Assyrians/Chaldeans
-Copts
-African Christians
-Indonesian and Malaysian Christians
-Pakistani and Bangladeshi Christians
Now it has come to Germany thanks to Merkel and her insane policies. The Germans have become the new Bosnian Serbs/Croats while Germany is the new Bosnia-Herzegovina. It will get much worse than this, this is only the beginning.