Last September, a man named Mark Feigin posted five comments on the Facebook page of an Islamic center. They were not Islam-friendly. “THE MORE MUSLIMS WE ALLOW INTO AMERICA,” he wrote, “THE MORE TERROR WE WILL SEE.” He called Islam “dangerous” and said it has “no place in western civilization.” A couple of his comments included vulgar or profane language. On December 20, the State of California sued Feigin, charging him with violation of a penal code that reads, in part:

“Every person who, with intent to annoy or harass, makes repeated telephone calls or makes repeated contact by means of an electronic communication device… to another person is… guilty of a misdemeanor.”

According to the state Attorney General’s office, Feigin was guilty of a crime because he had engaged in “repeated harassment” of people whose religion he sought to “mock and disparage.”

Eugene Volokh, the UCLA law professor whose “Volokh Conspiracy” blog is a popular site of legal debate and discussion, wrote about Feigin’s case on December 29, noting that by the Attorney General’s logic, the state would be able to sue citizens who had written equally critical comments on, for example, an NRA or pro-Trump website. “This can’t possibly be consistent with the First Amendment,” Volokh said.

No, it certainly is not. But it is thoroughly consistent with Islamic law, sharia. The simple fact is that nowadays it would be exceedingly unlikely to see an individual in the Western world being prosecuted by a government for mocking and disparaging a gun-rights organization or a Christian politician. No, these extraordinary legal actions are almost exclusively reserved for the punishment of those who have criticized Islam. 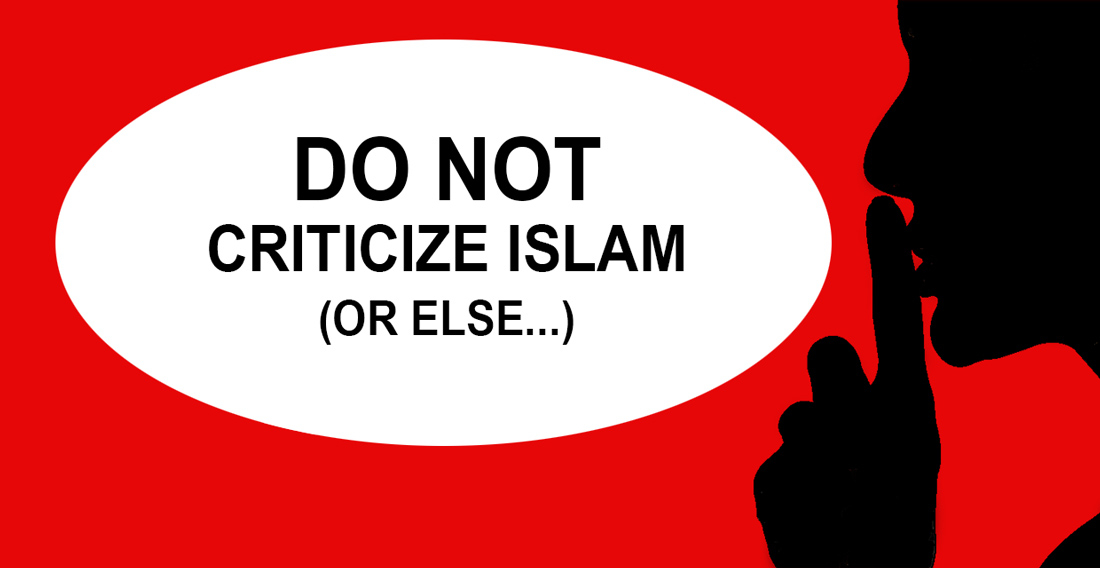 Consider the case of Danish author Lars Hedegaard, convicted of hate speech in 2011 for mentioning in a private conversation in his own home that many Muslim women and girls are raped by members of their own families. (His conviction was later reversed by the Danish Supreme Court.) Or Dutch politician Geert Wilders, tried three times in the Netherlands — the third time successfully — for “hate speech” directed at Muslims. Or the late Italian author Oriana Fallaci, tried in both France and Italy for, respectively, “inciting religious hatred” and “defaming Islam.” Or Finnish politician Terhi Kiemunki, found guilty of “slandering and insulting adherents of the Islamic faith” because she had “claimed that all of the terrorists in Europe are Muslims.”

Every day in the Western world, a wide range of opinions on every subject under the sun are expressed in books, newspapers, magazines, speeches, and television and radio interviews. An extremely tiny fraction of these statements of opinion results in lawsuits for libel or personal defamation. And only rarely does a government prosecutor bring an individual up on charges for criticizing a group or a religion or for engaging in “hate speech.”

Invariably, the subject at hand is Islam. Politicians and commentators justify these prosecutions on the grounds that Muslims in the West are a vulnerable minority and that speaking ill of their faith could encourage prejudice or even violence against them. On the contrary, it seems clear that the real reason for these prosecutions is that people in positions of authority fear violence byMuslims if their critics go unsilenced.

What such prosecutions amount to is the introduction of a key element of sharia law into the West. It is ironic, then, that on the day after Volokh posted his observations about the Mark Feigin lawsuit in California, the Guardianpublished an article by Ed Pilkington reporting that in the U.S., in the course of 2017, bills had been introduced in 18 state legislatures banning sharia law. “Legal experts point out that the bills are superfluous,” wrote Pilkington, “as the US constitution is the supreme law of the land and any foreign laws are subservient to it.”

According to one Elsadig Elsheikh, stated Pilkington, the real reason for the anti-sharia bills was to spread fear of American Muslims. “Even if these bills do not become law,” said Elsheikh, who monitors these anti-sharia legislative efforts on behalf of something called the Hass Institute, “they help to subject Muslims to surveillance and other forms of exclusion and discrimination.” Pilkington went on to quote other “experts” — from the execrable Southern Poverty Law Center (SPLC) and the terrorist-linked Council on American-Islamic Relations (CAIR) — to the effect that anti-sharia laws “further marginalize and ostracize the Muslim community,” normalize “Islamophobia,” and so on.

Nowhere in Pilkington’s article was there even a hint that sharia is, in fact, on the march in the West, marginalizing others, not least in his own country, the United Kingdom — where, as we have seen, the police can seem to be less eager to pursue actual criminals than to torment those whom they consider guilty of hate speech. (Last June, for example, three men in Northern Ireland were arrested for displaying “anti-Islamic material,” and two people in West Mercia were taken into custody for burning a Koran.) The sharia-style trials of Wilders, Hedegaard and others went unmentioned by Pilkington. So did the prosecution in California of Mark Feigin. Pilkington made no reference to the German courtwhich, last June, actually “authorized a group of self-appointed Sharia police to continue enforcing Islamic law in the city of Wuppertal.”

Nor did Pilkington take note of a German hate-speech law that compels online social networks to scrub offensive postings. The law, which went into effect on January 1, does not spell out what constitutes an offensive posting, but it does not have to: by now, everyone knows what such prohibitions are all about. It was under this law that New Year’s postings by Beatrix von Storch and Alice Weidel, officials of the Alternative for Germany (AfD) party, were removed from Facebook and Twitter. Der Spiegel applauded these suppressive actions, but lamented that muzzling Storch and Weidel enabled them “to present themselves as a [sic] victim.” Der Spiegel loftily dismissed an AfD official’s statement that the new law means “the end of the freedom of opinion,” even though it surely is, at the very least, an alarming and significant step toward stifling free speech. (To its credit, the popular daily Bildrecognized the dangerof the new law, and ran a headline that read, “Please spare us the thought police!” and called for the law to “be abolished immediately.”)

The sinister bottom line here is that the same reporters and commentators who keep insisting that it is absurd to worry about sharia coming to the West are, in fact, ideologically arm-in-arm with those in authority who are aggressively introducing sharia-style laws in the West, aggressively prosecuting speech that violates those laws, and issuing dark warnings — in tones unbefitting public officials in a free country — that you had better learn to be sharia-compliant or you will be sorry. The real lesson of all this, of course, is that we had better learn to be aggressive in our resistance to this proliferation of sharia-influenced prohibitions or we will, indeed, end up being very, very sorry.