She got caught, so she is stepping down. That’s great, but the larger problem remains: why was a woman who covers her hair being used to sell hair products? This was patent Islamopandering from L’Oreal — a tacit recognition of what the future holds for women in the West. This fiasco with Amena Khan has doubtless taught them nothing: they’ll just hire another hijab-wearing Muslima, and keep their fingers crossed that no Jew-hating tweets from their new model surface.

Who put the poo in shampoo?

Last week Amena Khan made headlines worldwide for being the first hijabi model hired by a major cosmetics company for a hair-care campaign.

Today she announced she had stepped down.

In a statement posted to Instagram today she wrote:

“I deeply regret the contents of the tweets I made in 2014, and sincerely apologise for the upset and hurt they have caused. Championing diversity is one of my passions, I don’t discriminate against anyone. I have chosen to delete them as they do not represent the message of harmony I stand for.”

“I recently took part in a campaign, which excited me because it celebrated inclusivity. With deep regret I have decided to step down from this campaign because the current conversations surrounding it detract from the positive and inclusive sentiment that I set out to deliver.”

Amena Khan had been chosen to be part the L’Oreal Paris campaign alongside with 15 other stylists and models for a hair campaign. The British stylist is well known on social media, with nearly 400K subscribers on YouTube and nearly 600K followers on Instagram.

Her videos feature a mix of focusing on beauty, make-up, home styling and her own life.

Although she did not specify which tweets caused the controversy, it is likely they related to her criticisms of Israel in July 2014. Some of these tweets were highlighted by critics on Twitter after Amena Khan’s name circulated in the media. 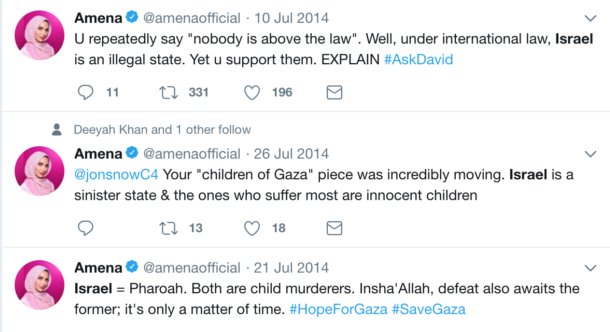 The tweets and screenshots were picked up by far-right media outlets in the U.S., including the Daily Caller….