Hugh Fitzgerald: Tariq Ramadan: No Light At The End Of His Tunnel 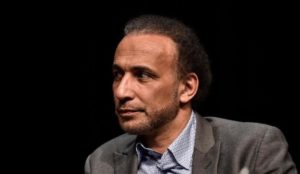 Less than half a year ago, Tariq Ramadan was still the golden boy of Islamic apologists, offering his suave taqiyya on behalf of Islam to European audiences from his prestigious post as a professor at St. Antony’s College, Oxford, with a chair funded especially for him by the Emir of Qatar. And at the same time, he held a second important position (and received, no doubt, an even larger salary than he was already getting at Oxford) as the head of the Islamic Law and Ethics Research Center, his own academic fiefdom, in Qatar.

Then it all came crashing down. In October, a Muslim woman, Henda Ayari, accused Ramadan of inviting her back to his hotel room in 2012, where he suddenly turned into a violent sexual predator, and raped her. She had written about him even before making her public accusation, in her book I Chose To Be Free, but there she had not named him, simply referring to Ramadan by the alias “Zoubeyr”:

“This man, Zoubeyr, transformed before my very eyes into a vile, vulgar, aggressive being – physically and verbally,” she wrote. And then she explained that she was now giving him, in the wake of the Harvey Weinstein scandal, his real name: Tariq Ramadan. “For modesty, I will not give the precise details here of the acts he made me submit to. But it is enough that he took great advantage of my weakness and the admiration I felt for him. ”

“He allowed himself gestures, attitudes and words that I could never have imagined.”

“And when I resisted,” she writes, “when I cried to him to stop, he insulted and humiliated me. He slapped me and attacked me. I saw in his crazy eyes that he was no longer master of himself. I was afraid he would kill me. I was completely lost. I started crying uncontrollably. He mocked me.”And she described his violence: “He choked me so hard that I thought I was going to die.” She also described him as threatening that her children might be harmed if she were tell anyone.

A second Muslim woman in Paris also accused Ramadan of raping her in a hotel room in 2009. The unnamed 42-year-old, who is reported to have disability in her legs, said….that the professor had subjected her to a terrifying and violent sexual assault. The French edition of Vanity Fair magazine, whose staff met the 45-year-old woman, said her lawsuit against Ramadan described “blows to the face and body, forced sodomy, rape with an object and various humiliations, including being dragged by the hair to the bathtub and urinated on.”

A third complainant, identified as Yasmina, told Le Parisian in an interview that Mr Ramadan sexually harassed her in 2014 and blackmailed her for sexual favors.

A fourth woman was also reported to have  accused Ramadan of similar behavior, but has still not publicly revealed her name.

At Oxford, after this initial group of accusers came forward, it seemed that Ramadan might weather the storm. The head of Oxford’s Middle East Center at St. Antony’s College, Eugene Rogan, at first was unwilling to take forceful action against Ramadan, but made clear that he would continue to teach and meet with students as if nothing had happened, declaring that:

“It’s not just about sexual violence. For some students it’s just another way for Europeans to gang up against a prominent Muslim intellectual. We must protect Muslim students who believe and trust in him, and protect that trust.”

Why Oxford needed to “protect Muslim students” who “believe and trust in him” by essentially ignoring the serious allegations made against Tariq Ramadan was entirely unclear; there was no groundswell of support for him among Muslim students, who appeared as disturbed by the accusations against him, the Muslim “intellectual” who used to speak about the “morality of Islam,” as were the non-Muslims.

Then came a second set of accusations, even more disturbing, from Switzerland. In the Journal de Geneve, four women claimed that when Ramadan was their teacher at a high school several decades ago, and they were all between the ages of 14 and 18, he had sexually assaulted them. This was too much for the University of Oxford to overlook, and it issued this statement:

“The University has consistently acknowledged the gravity of the allegations against Professor Ramadan, while emphasizing the importance of fairness and the principles of justice and due process.”

But Oxford had not “consistently” acknowledged the gravity of the allegations against Tariq Ramadan. The initial reaction, by the director of its Middle East Centre, it bears repeating, was not to focus on the allegations, but to come to Ramadan’s defense, declaring that Muslims might see the accusations as “just another way for Europeans to gang up against a prominent Muslim intellectual.”

After the Geneva revelations, Oxford put him on a “leave of absence,” which the university claimed had been “by mutual agreement.” This fooled no one; Ramadan was in disgrace, at least in England. It did not help his case that a former official, Bernard Goudard, the “Mr. Islam” in the French Ministry of the Interior, commenting on Ramadan, said that the French government had always known about Ramadan’s exceedingly dissolute life behind a facade of “Islamic morality,” but hadn’t realized just how bad his behavior was: “That he had many mistresses, that he consulted sites, that girls were brought to the hotel at the end of his lectures, that he invited them to undress, that some resisted and that he could become violent and aggressive, yes, but I have never heard of rapes, I am stunned.”

Whatever happened at Oxford, Ramadan could still count on his fabulous sinecure in Qatar, and no doubt expected he could always make that his permanent base. Wasn’t Ramadan “Europe’s leading Muslim intellectual”? And wasn’t he the grandson of Hasan al-Banna, founder of the Muslim Brotherhood, which was still welcome in Qatar?

But the arrogant Tariq Ramadan assumed his different Muslim claques would continue to stick by him. Ironically, it has been the generous financial the support he has received from the Qatari royal family, who bought-and-paid for his Oxford professorship (even though Tariq Ramadan did not have the usual qualifications or degrees for a university professorship, having previously only been a teacher in a girls’ school in Geneva), and who arranged his second post as head of the Islamic Law and Ethics Research Center in Doha, that worked against him with his former admirers among the young Muslims in France. Ramadan’s swanning around with the plutocrats of the Gulf apparently does not sit well with the boys from the Parisian ‘hood, in such places as Seine St.-Denis. And what did Ramadan do, in order to hold onto that set of former admirers, the young, down-at-heels young Muslims? He decided to distance himself  from Qatar:

“Faced with a real decline in popularity in the French suburbs because of his links with an oil monarchy and extreme wealth, the Islamologist tended to distance himself — at least in the press — from Qatar. This adept at double-talk had declared on the program of Jean-Jacques Bourdin on RMC: “Neither Qatar is close to me, nor am I close to Qatar.’”

But instead of the Qatari rulers being understanding about this (“he doesn’t mean it, he just said  that for his admirers in Seine St.-Denis”), they were furious. His remark was that of a colossal ingrate, since his professorship of contemporary Islamic sciences at Oxford is sponsored by “His Highness Sheikh Hamad bin Khalifa al-Thani,” the father of the current Emir. Indeed, it was Qatar’s willingness to endow a chair for Ramadan that ensured that Oxford would hire him. “The chair was created essentially for him,” Ghanem Nuseibeh, co-founder and former president of the Middle East students union in the UK, told The National. “He does not necessarily qualify as the most suitable person for that chair – it is a political chair that was created for political reasons, not for academic reasons.”

When your chair at Oxford is paid for by Qatar’s  Sheikh Hamed bin Khalifa al-Thani, when a Qatari foundation paid for your second sinecure in Doha as head of the Islamic Law and Ethics Research Center, you should watch what you say about Qatar. But Ramadan was no longer thinking straight.

The ruling family in Qatar did not take kindly to Ramadan’s latest remarks. And it no doubt realized, as since June 2017 it has been faced with the open hostility of its neighbors, especially Saudi Arabia and the Emirates, that being represented — in Europe, in the Gulf — by such a dissolute figure as Tariq Ramadan was not wise.

Now Ramadan has been warned, by the government of Qatar, not to dare to “step foot” in Qatar. No more sinecure in Doha. No more directing a “research center” on Islamic law and ethics. No more traipsing about the Gulf states, pocketing fat honoraria. And he did it entirely to himself.

And that wasn’t the last of Tariq Ramadan’s woes. He may no longer have a job, or a salary, or more exactly, be out of two jobs, or two salaries, but at least he’s still out of prison. For now.

But everything became much, much worse for Ramadan when, on January 28, 2018, he was required to appear before a French magistrate in Paris to be interrogated about the accusations against him of sexual violence, including rape, blackmail and death threats.

For now, it’s hard to see what Tariq Ramadan can do to save himself. Yes, for a while his followers have muttered darkly about a “Zionist plot,” but what kind of “Zionist plot” would include both the young Muslim thugs of the French suburbs, many of them now disaffected, and the royal family of Qatar, now deeply unhappy for other reasons, with Tariq Ramadan? There is no “making up” between Ramadan and Oxford University; his “leave of absence” is permanent. Nor is there any likelihood that Ramadan, having been banished from Qatar, will ever be allowed back.

Ramadan, who was seen joking and laughing at Oxford after the first set of accusations were made public, still may not quite comprehend the deep hole he has dug, and from which nothing and nobody can rescue him. He could now try to save his reputation among the young Muslim males in France, letting it be known that while he accepted funding from the Qatari rulers, he has always remained his own man, defender of ordinary Muslims, just like the boys in the ‘hood, that is, the suburbs around Paris, and insisting he owed nothing to the plutocrats of the Gulf. But then he might think to himself, “if I say that, then there is no chance I can get back in the good graces of the ruling Al-Thani family,” and in the end, isn’t that what Tariq Ramadan wants? That Oxford professorship, that Doha research center directorship?

And now, beyond the spectacle we have already enjoyed, of Tariq Ramadan being accused of very serious sex crimes in two different countries, so far by eight different women, and having had snatched from his grasp two prestigious sinecures, and being investigated for months by French magistrates, and then taken into custody, and arrested, and finally, on February 2, charged with the rape of two Muslim women, with more charges, involving other women, to come, we are likely going to witness a fitting denouement for this leading “Muslim intellectual,” he of the Hallmark card banalitiesand “the morality of Islam” — one which could scarcely have been dreamed of just a few months ago.

That Tariq Ramadan goes to jail.