You can’t rely on the government or media authorities to tell you what’s going on in Germany; they are the ones who caused the current situation. Let’s turn to an ordinary German, to see how she likes life under Islamic occupation:

An ex-Muslim provides some inside insight on Islamic Germany:

Someday all Germans will wish they could have their country back. By then it will be too late. Moonbats like Merkel will have given it away.

No surprise here. German women know they can’t count on the police in Merkel’s Germany: the cops’ foremost priority is to keep the German public from realizing just how disastrous Merkel’s mass importation of Muslim migrants has been. 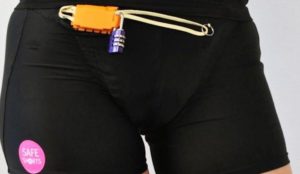 Oberhausen – A bitter experience got entrepreneur Sandra Seilz (42) the idea of a device that might protect women from sexual assault in the future.

Whilst out jogging, Sandra was attacked by three drunk men, who tried to tear her pants off. The brave intervention of a pedestrian prevented worse from happening. “After that I had the wish of developing a pair of pants with which women all over the world can feel safer”, says Seilz.

-The pants consist of a tear- and cut resistant material. They also feature a protector in the groin to protect from any grabbing
-Strings along the waist cross at the groin. They are being lashed down to prevent the pants from being pulled down/ripped down. A combination lock is supposed to provide additional safety.
-The pants have an alarm (130dB) that is being triggered by someone pulling/tugging/tearing on them. It can also be activated manually if needed.

The safe shorts are available as running pants or hotpants. “Starting off, we only produced a small series, but it was sold out really quickly”, tells us the entrepreneur from Oberhausen. The demand – 80% of it in Germany/from Germany (the article says, mostly German women buy it) – is high….