Must read: by Mark Steyn

I wonder if that is true; I wonder if even M Collomb will remember his name in the years ahead. 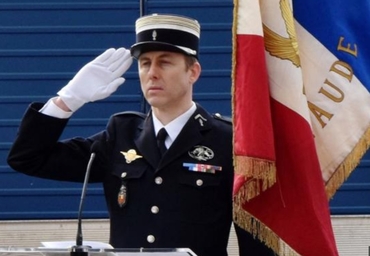 In the siege at the Super U in Trèbes, a French policeman, Arnaud Beltrame, offered to take the place of a female hostage. That day’s Islamic fanatic accepted the deal, and Lieutenant-Colonel Beltrame went into the supermarket, placing his cellphone on a table so that his comrades outside could hear what was going on within. When the shots started, they stormed the building. (I am not sure why the gendarmerie released that detail, since it ensures presumably that next week’s Islamic fanatic will be more careful about open phones.)

Colonel Beltrame took four bullets, and from his sick bed, in hospital at Carcassonne, was married to his fiancée Marielle. They had planned a June wedding, but could no longer wait. In the early hours of Saturday morning the French Interior Minister, Gérard Collomb, Tweeted:

I wonder if that is true; I wonder if even M Collomb will remember his name in the years ahead. I was last in Carcassonne two years ago, heading south from Toulouse, a city that to me seemed lost, with soldiers ambling the allée Jean-Jaurès in four-man patrols with weapons drawn, as surly young Mohammedans made masturbatory gestures at them from passing cars. In the day, you can just about believe it’s a French city, with pretty demoiselles bicycling bare-legged with the wind in their hair. With sundown, the post-French future comes creeping in. In the teeming warren of side streets north of the allée, every place – every grotty paved triangle at the intersection of the narrow one-way lanes – is surrendered to knots of young Arab and more occasionally African men. I sat at a cheap plastic table outside an unprepossessing patisserie in the Place Robert-Schuman “Père de l’Europe” – “father of Europe”, by which they mean M Schuman was one of the founders of what’s now the EU. But in Place Robert-Schuman at 8.30 on a Tuesday night there was not a single person M Schuman would have recognized as “European”. Even more startling, the streets appeared to have been vacuumed of women, not just the pretty girls on the bicyclettes but all females. All that remained were the men – bored, restless, resentful.

In contrast to Toulouse, Carcassonne an hour south is inspirational. The city is a magnificent, two-thousand-year-old hill fortress that’s been fought over by Romans, Visigoths, Saracens, Charlemagne, Pepin le Bref, Albigensians, Papal legates, Simon de Montfort, the Black Prince, and a few others I may have forgotten. I was headed from Toulouse to Marseille and Nice, but I saw the town from the autoroute, remembered it from childhood, and stopped – because, as often in Europe these days, I felt as if the chance might not come again. So I revisited the frieze at the Narbonne gate of “Dame Carcas”, a possibly mythical character from the days when it was a Muslim fortress under siege by Christians and, after a cunning if apocryphal ruse, milady Carcas rang the bells and thereby gave the town its name – “Carcas sonne“.

Carcassonne was literally a breath of fresh air after Toulouse. But ask not for whom Carcas’ bells toll: an ancient hill fortress doesn’t work as well when the enemies are not without, but inside the gates, all jumbled up with your guys. And so it was that Moroccan-born Redouane Lakdim began his killing spree by hijacking a car in Carcassonne, injuring the driver, killing his passenger, dumping both bodies in the bushes, and running over a patrol of gendarmes. The authorities took the precaution of evacuating the outer town and ordering the walled city into “lockdown”, as they didn’t call it back in Charlemagne’s day. But the Allahu Akbar loon was already en route to Trèbes, an outlying community of 5,000 people, where the Super U sits between a kebab house and the ancient farmland of what, until recently, we had assumed was eternal, enduring France.

For all he mourns the brave M Beltrame, Gérard Collomb and his colleagues will do nothing to reverse the suicidal immigration policies that lead to French citizens getting taking hostage in the supermarket. I am human enough to be moved by the story of Arnaud Beltrame’s deathbed wedding. I am human enough to be moved by the story of the 85-year-old Parisienne who survived the Holocaust only to be stabbed eleven times and then set alight round about the exact same time Colonel Beltrame was being shot by M Lakdim. Back in 1942, the then young girl was one of many Paris Jews arrested by collaborationist French police in the “Vel d’Hiv” round-up and shipped to Auschwitz. In the habit of western politicians only saying sorry for things their predecessors did, President Macron recently apologized for Vel d’Hiv. Perhaps in seventy-five years, his successor will apologize for M Macron’s own feebleness and passivity in the face of a new enemy. Or perhaps by then there will be, in any meaningful sense, no France.

I would like to know the murdered octogenarian’s name, but the authorities and media have agreed to refer to her only as “Mireille K”, weirdly diminishing and dehumanizing her even in death. [UPDATE: The victim’s surname has now been given as Mme Knoll.] As I said, I am human enough to be moved by these stories, and would like to know and remember the names of all the victims of the insane decision to keep importing Islam into the heart of the west. But there are so many of them, and arithmetic ultimately overwhelms humanity. There will be more Arnaud Beltrames and “Mireille K”s, because there will be more Redouane Lakdims, because more and more arrive each day, because President Macron and M Collomb and their counterparts throughout Europe have decreed it must be so and can never change.

Yet there is other arithmetic that democratic societies wishing to remain democratic would be prudent not to disregard. A new EU-wide poll finds that seventy per cent of Europeans think the “rapid population growth of Muslims” is a somewhat or very serious threat to Europe. In France, it’s 66 per cent – which, given the high percentage of Muslims already in France, suggests perhaps some three-quarters of ethnic French agree on the “seriousness” of the threat. What’s the old saying – “Fifty million Frenchmen can’t be wrong”? Sixty-six per cent of 67 million is 44,220,000 – and those 44 million Frenchmen are as wrong as wrong can be, at least as far as Europe’s political class is concerned.

Also from that new poll: Fifty per cent of Europeans believe their children will live worse lives. In France, it’s 62 per cent. Could these two statistics – the 66 per cent who regard Islam as a serious threat, and the 62 per cent who think the new generation will lead worse lives – possibly be connected? A society that truly wished to honor Arnaud Beltrame’s sacrifice would at least permit honest discussion of the question, and of immigration policies that ensure only that the walls of Carcassonne and of the French state will crumble to nothing. Lieutenant Colonel Arnaud Beltrame, 44, had his throat repeatedly cut before being shot in the head during the French terror attack

French FM on murder of Jewish woman by Muslim: “We cannot yet say if the motive for the murder was antisemitism”

He does allow us to come to the conclusion that it is: “We cannot yet say if the motive for the murder was antisemitism but it is reasonable to assume, it will not be surprising and, therefore, this only strengthens the fact that this struggle has not ended, and that we will need to continue fighting against antisemitism.”

Indeed, “this struggle has not ended,” and it will not end as long as Jean-Yves Le Drian and others like him refuse to acknowledge the root causes that lea…

A granddaughter of the victim, Noa Goldfarb, wrote on Facebook: “Twenty years ago, I left Paris knowing that neither my future nor that of the Jewish People is to be found there. But who would’ve thought that I was leaving my relatives where terrorism and cruelty would lead to such a tragedy. Grandmother was stabbed to death 11 times by a Muslim neighbor she knew well, who made sure to set fire to her home and left us not even one object, a letter, a photograph, to remember her by. All we have are our tears and each other.”

“The Paris prosecutor’s office said Sunday that it had not yet determined a motive, but ‘is not excluding any hypothesis.’”

An update on this story. “Two arrested over brutal killing of 85-year-old French Jewish Holocaust survivor,” Times of Israel, March 26, 2018

2 thoughts on “Chivalry and Suicide”