All over Europe, Israel is routinely vilified using false “Palestinian” victimhood narratives, while the “Palestinian” jihadis’ bloodlust and atrocities are ignored. This is the result. 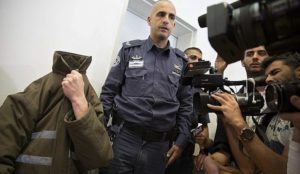 An employee at the French consulate in Jerusalem was indicted on Monday for using a diplomatic vehicle to smuggle dozens of guns from Gaza to the West Bank.

In addition to Romain Franck, five residents of the West Bank and East Jerusalem were also charged. A total of nine suspects have been arrested in the case.  More from Jihad Watch

She deserves more, but that’s a good beginning. You want to bet that she becomes a full time terrorist when she grows up ?

The deal is not final as it has not yet been approved by the IDF West Bank Court, but if it goes through, Tamimi will serve about five more months….  JPOST.COM

All your Israel are belong to us:

In George Orwell’s dystopia, written during WWII he imagines a totalitarian future where history is inverted and language is perverted. This is what we now mean by “politically correct speech.” And so we must draw inspiration from someone, who in 1984, took on the false and politically correct narrative that Israel is an occupier of Arab land where Arabs have supposedly lived in the land of Israel, since “time immemorial.”

In 1984, a successful and well-known female American journalist, who had specialized in reporting the Israeli-Arab conflict, published a book called From Time Immemorial: The Origins of the Arab-Jewish Conflict over Palestine. The journalist in question was Joan Peters, (who recently passed away). Peters had begun her career in the Middle East as a sympathizer with the Arabs of Palestine. However, the more she learned, the more she began to question the dominant anti-Israeli narrative that she had absorbed in the Arab World and she began to change her opinion. This caused her to become her own historian and to delve into the British archives for the period of the Mandate for Palestine, from 1922 to 1948.

Her most profound discovery was that the majority of the Arabs living both west and east of the Jordan River come from outside that area, from what is now Eastern Turkey, Lebanon, Syria, Iraq, Egypt and as far away as North Africa. One of her key sources was a PhD in anthropology who, when doing studies of marriage and kinship ties among Arab Israelis, discovered that a great preponderance of the Arab clans west of the Jordan had extraterritorial origins.

Delving into the British archives, Peters put together a thesis that strongly argued that despite the fact that the Balfour Declaration and the Mandate for Palestine were designed to reconstitute an independent Jewish homeland in Palestine through immigration of Jews from all of the world, instead, British administrators on the ground adopted an anti-Jewish and anti-Zionist approach to the Mandate and did everything possible to facilitate the illegal immigration of Arabs from surrounding countries.

Peters’ central thesis flew in the face of the anti-Zionists, who claim that the Arabs of Palestine had been there for centuries, that is to say “from time immemorial,” which is the intentionally ironic title of her book. For a short period of time, the Likud and conservatives around the world used her book to demonstrate that most Palestinians were not indigenous to the land of Israel. However, soon afterwards some Israeli scholars, supported by Noam Chomsky himself, smeared Peters, charging that her research was superficial and that her core demographic conclusions were wrong.

Recent academic research on the demography of the land of Israel during the last 150 years, suggest that Peters was not wrong, and that the exponential increase of Arabs into the area of the Mandate for Palestine from 1922 to 1948, was largely due to British encouragement and the fact that the incoming Jewish Zionists were creating a dynamic economy which attracted labour from surrounding countries, whose economies were stagnant.

In 1974, I volunteered as an agricultural laborer on a left wing kibbutz in Israel. I was astounded to find out that the neighbouring Arab villagers had moved there from Egypt, lock stock and barrel in 1922. At that time, I did not have sufficient historical understanding that I subsequently gained from reading Peters’ book. It is now clear that this village was part of a wider movement of Arabs from the wider Near East into the land of Israel, where they were treated better than their traditional Arab landlords, given a reasonable wage and had their medical issues taken care of, suggesting ironically, that in many respects the Arabs of Palestine have gained a higher quality of life;  better than that of the Jewish Israelis who’ve had to fight for it and protect it.

When you read Peters’ book you will find many other chapters that make you realize that Israel and its people are there “by right not by might.” One chapter focuses on personal recollections of Jews from Arab countries who were expelled by their governments and came to Israel. In the lands of their birth, their money and property was confiscated and they very often suffered the violence of pogroms before they were allowed by the various Arab dictators to join the new state of Israel, the homeland of the Jewish people.

Recent scholarship suggests that these recollections are classic examples of dhimmitude. Dhimmitude refers to the second class treatment of the Jewish and Christian minorities under Shariah law creating a fearful personality that is transformed only when the children of these people are born in a free country, such as Israel or any of the other English speaking democracies.

Despite the fact that the data and arguments of Joan Peters’ book are even stronger today, given recent scholarship, her work is not widely read, certainly not by the Rabbis of the Jewish community. Her book is rarely quoted by Zionists.  Many conservative friends of Israel are not aware of it. It is time for its resurrection.

2017 marked the 100th anniversary of the Balfour declaration, which became the basis for the Mandate for Palestine in 1922, which, according to international law, is still valid and which gave Israel land rights west of the Jordan until the sea. We have engaged a group of volunteers to summarize each of the 18 chapters of Joan Peters book. We will then contact like-minded scholars and academics both inside and outside of Israel to update the data of each of the 18 chapters. We will then write an updated summary of each chapter and the latest bibliography  which supports it and post it on the Internet.

We will then engage a series of translators who will translate this project into Hebrew, Arabic, Turkish, Urdu, Hindi, French, Italian and Spanish. These will then be posted on the Internet. It is our hope that Joan Peters’ book and the updated arguments of the book, will share with the public the true story of Israel and its relation to the Arab communities that surround it, and unfortunately still threaten its existence.

This project is an effort of enlightened volunteers and its follow-up will include lesson plans and podcasts that could become the basis of curriculum in both secular and Jewish schools. We unfortunately live in a time where untruth has become the norm. Israel is portrayed as a white, colonial, apartheid regime of people from Europe who oppress so-called indigenous Arabs. Nothing could be further from the truth. The Jews are the indigenous people of the land of Israel. Joan Peters’ book shows that this is indeed the case and that the Arabs are newcomers.

We believe that there will be very little progress towards reconciliation in the Middle East until people in the Muslim world have access to this material, so that they can then digest the true history of the conflict between Israel and its Muslim neighbours.

This is a project which demonstrates that there can be no peace without the truth. George Orwell, had he been alive today would have given us his blessing.

First published in Behind the News.

BRILLIANT. Brilliant idea. I for one will look forward very much to reading the updated and expanded version. By the way – it might also be worth someone’s while to take Jacques Ellul’s “Un Chretien Pour Israel” (1983) and translate it into good English and post *that* on the internet also. Ellul, author of one of the western world’s classic analyses of propaganda, turns his attention to the Arab/ Muslim – and, in 1938, Soviet also – propaganda against Israel, in its various manifestations, and **takes it to pieces** in masterly fashion. The chapter on the western mainstream-media coverage of the first Lebanon war is a classic; and when I read it, and then later watched the media coverage of the 2006 Hezbollah-Israel war, and the 2009 Hamas-Israel skirmish, I saw that the very same tropes and techniques that Ellul had exposed in his 1983 book, were *still* being deployed, unchanged, by the Islamophile – or Islamocorrupted – media in the early 21st century. I struggled through ‘Un Chretien Pour Israel’ with my schoolgirl French, sometime in the 90s, and it immunised me, forever, against the ‘palestinian [sic] narrative’ that was then even beginning to sneakily seep into the evangelical and previously-staunchly-pro-Israel circle in which I moved.