“As an anthropologist, I approached the subject very scientifically,” American University Professor Akbar Ahmed said concerning his documentary Journey into Europe during a February 4, 2016, Georgetown University preview screening. Yet scrutinizing this film on Islam in Europe, subsequently released in full online and now the basis for a recent book published by the Qatari-funded Brookings Institution, reveals a Pollyannaish multicultural dream masking actual sharia threats.

The film begins by presenting the oft-vaunted, yet often unsubstantiated, convivencia myth of a glorious diverse civilization of Jews and Christians in Spain living under Muslim rule beginning in the eighth century. Ahmed’s thesis, as described in a February 1, 2016, Institute of Global Engagement (IGE) conference call, is that “one of Europe’s most glorious chapters in its history is the Andalusian period.” “It is this idea of la convivencia that is so desperately needed in the 21st century,” he narrates in the film while making minimal reference to the oppression of Iberian non-Muslims who endured centuries of ravaging jihadist conquest. By diametrical contrast, Indian diplomat Shashi Tharoorcondemns ideas of imperialists ultimately benefitting subjugated natives in his 2016 book An Era of Darkness:  The British Empire in India, concerning the Pakistani Ahmed’s native Indian subcontinent.

No such skepticism appears in the film, where Rabbi Lord Jonathan Sacks reiterates longstanding “Golden Age of Islam” tropes of “Islam leading Europe out of the Dark Ages.” “Europe learned everything from Muslims. It was Muslims who brought civilization to Europe,” declares Pakistani-Scottish politician Bashir Mann while ignoring the damage Islamic conquests inflicted upon European civilization, such as slavery. While refugees from Muslim conquests historically benefitted Europe, English Muslim convert Sheikh Abdul-Hakim Murad Winter states the Europe has been “one of the world’s least tolerant continents.” Here the “points of light in the Dark Continent historically have tended to be Muslim.”

Better evidence exists for Ahmed’s film focus on the lasting cultural legacy of “conviviencia in reverse” in Sicily. Here a mixed population including Arabs lived under Christian rulers following Norman conquest in the 11th century of the island from Islamic rule after Sicily had functioned as a staging area for the 846 Islamic sack of Rome. Ahmed’s former student, Rice University sociologist Craig Considine, has extensively examined on his website (while plagiarizing this article) this “other al-Andalus.”

According to British historian John Julius Norwich, Norman Sicily, not Muslim Spain, appears as the truly tolerant society. Norman “Sicily became a cultural clearinghouse where, for the first time, Western and Oriental scholars could meet on an equal footing.” The Normans “created, in a Europe rent by schism and exhausted by the Crusades, not just a kingdom but a political and religious climate in which all races, creeds, and cultures were equally encouraged and equally favored.”

Ahmed’s film moves from Sicily to the Balkans, where his examination of “centuries of clash and conflict” between Christians and Muslims always seems to favor the latter. His film team highlights a visit to Bosnia’s Fojnica monastery and its display of the Ahdnama decree made by Ottoman sultan Mehmet II (the Conqueror) following his 1463 conquest of Bosnia. He praises this document for guaranteeing religious freedom to Bosnian Catholics, without any mention of just how brutal Muslim subjugation of non-Muslim dhimmis often was.

Ahmed’s film therefore presents yet another common myth, described by Islam historian Andrew Bostom, that “Ottoman Turkey was a tolerant multi-cultural civilization….Nothing could be further from the truth.” Mehmet II’s Bosnian conquest was part of an Ottoman expansion through southeastern Europe that included his 1453 brutal conquest of Constantinople and overthrow of the Byzantine Empire. Contrary to Ahmed, Balkan lands have few fond memories of their centuries under the Ottoman Muslim yoke, including its enslavement of non-Muslims, examined by no less than Bosnia’s literary legend, Nobel Prize winner Ivo Andric.

Ahmed on screen appears more concerned with Balkan Muslim suffering as he appears at the memorial for Bosnian Muslims massacred around Srebrenica by Bosnian Serbs in 1995 during Bosnia’s civil war. The film characterizes the killings as “genocide,” but extensive analysis suggests that Serbs sought to kill Muslim military-aged males while letting women and children flee. Canadian general Lewis Mackenzie, the former commander of United Nations peacekeeping forces in Bosnia, offered this explanation himself before the Canadian parliament while noting atrocities on all sides of Bosnia’s civil war.

Ahmed’s analysis of the 1947 partition of the Indian subcontinent at his March 26 Journey into Europebook presentation at Georgetown’s Berkley Center seems more appropriate for Bosnia than his biased film treatment. He described a “mad frenzy of Muslims and Hindus and Sikhs in 1947, an orgy of mad killing when almost two million people died. And whom do you blame then? Who is right, who is wrong, it is complete madness.” As other analysts have noted, Serbs were in many ways the biggest losers in the various 1990s Balkans bloodbaths, while Muslim communities in Bosnia and Kosovo have sometimes brought forth jihadist threats.

The film, meanwhile, shows Bosnian Jewish leader Jacob Finci reiterating his view that Bosnia is “almost free of antisemitism,” but this contention leaves much unsaid respecting Bosnia’s Jewish-Muslim relations. Bosnian Jews survived Ottoman rule as second-class dhimmis and even once faced massacre in 1833. More recently, a 2017 Bosnian naming of a school for a Muslim thinker who collaborated with Nazis elicited protests from Israel. The incident recalled those Bosnian Muslims in the German Waffen SS who helped exterminate 10,000 of Bosnia’s 14,000 Jews in World War II; some of these veterans later fought against Israel’s establishment in 1948. Recent years have also seen the formation of a Bosnian Muslim neo-Nazi group and Bosnian Muslim soccer fans chanting anti-Semitic slogans in a Vienna protest against Israel.

Thus Ahmed’s Journey into Europe is far more superficial than scientific in its treatment of Europe’s Islamic history. Even more disturbing, he continues this pattern when his film moves to cover Western Europe’s modern Muslims, as a forthcoming article will document. 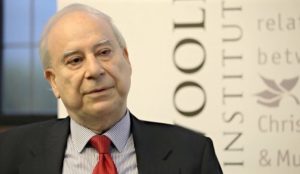