The author of The Strange Death of Europe, Douglas Murray, spoke about the European elites and Hungarian Prime Minister Viktor Orban in an interview with French newspaper Le Figaro.

He stressed that political leaders have fundamentally changed their societies without the permission of the people, or even against their will.

“Many are criticising Viktor Orban. But the question is very simple: who was right in 2015? Orban or Merkel? The latter was punished by her voters and now AfD is Germany’s biggest opposition party,” he said.

According to the British author, it shows the incredibly arrogance of European elites that politicians and pundits are criticising Viktor Orban, while he only fulfilled the will of his people.

Somali migrant tries to set Swiss church on fire and causes at least 16,000 euros in damages 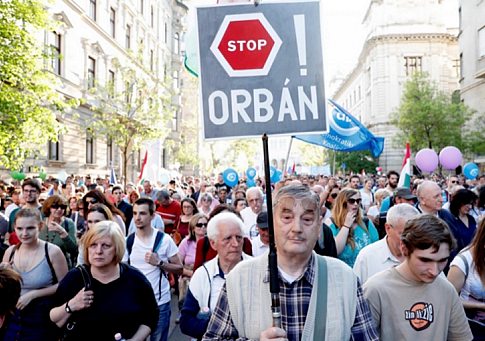 The following op-ed by Zsolt Bayer discusses the aftermath of the recent general election in Hungary, in which disappointed and angry Progressives have taken to the streets to bring down the “regime” of the victorious prime minister, Viktor Orbán.

CrossWare, who translated the essay, sends this explanatory note:

This article by Zsolt Bayer is about the liberal protests, similar to what happened in the USA after the election of Donald Trump, when screaming liberal lunatics and BLM terrorists tried to generate a “revolution”. The similarity between the two cannot be denied; it’s almost as if the same organization was using the same script in both locations…

The title refers to Ferenc Gyurcsány, an ex-Socialist former Prime Minister, who gave the famed: “we lied day and night” speech. Since little Frank lost himself in the bottle, with increasing frequency he has been saying the darnedest things. (We do not need a kids’ show to do that). First he said in a press conference that he is an excellent mathematician, and to demonstrate it, he stated that the number 11 is the largest prime number. Then he corrected himself, saying it’s the smallest, and then he lost his train of thought… Then on election day, in a similarly limited mental capacity, he wanted to complain about the lines at the voting booths, and he got into a long explanation about how the snakes are slithering (he meant the queues are like snakes, but whatever).

The translated op-ed from the Hungarian daily Magyar Idők:

Before the election Ferenc Gyurcsány (snake soup with prime number noodles) warned everyone that the right will not accept their election loss, and will create riots in the streets where blood will flow because the right is like that, and especially Orbán…

Then came the election, where the right achieved a two-thirds super-majority victory for the third time, and the losers are not capable of enduring the election loss, screaming about cheating and planning street riots. They now say they will turn out, they will turn out so much that they will never go home again from the streets. The leader of a party that received only 2% stated on the night of the election loss that the “regime” will not remain till 2022, and while he is saying this, in his hipster beard the nothing makes a noise.

So many black knights! [Referring to Monty Python and the Holy Grail, the Black Knight Scene — translator] Their arms and legs are cut off, but they are still on the ground screaming hysterically to stop, come back, because they will bite off our heads. It’s pitiful, but it’s infinitely annoying too. It is infinitely annoying to prove again and again that the Bolsheviks are eternal and indefinable. The term itself and its historical background are marvelous: majority, majority.

This is what they called it; they named themselves that and were always in a minority. Moreover, their most important features are: total inactivity, the cult of force, and “everyone outside of us is stupid, everyone is guilty, everyone is wrong” mentality. They brought their usual shape on the eighth of April [election day] as well. As the people began to flow to the polling booths, they talked about the celebration of democracy; they praised the voter, who was coming, flooding, as a tsunami to dismiss and replace the dictator.

Then it turned out that the people really poured out, but to give two-thirds to the current set-up (the “dictator”), and to send this opposition back to their mothers… at last! And you see a miracle: in a moment everything has changed! Suddenly it was the darkest dictatorship instead of the celebration of democracy, and the people, in a blink, became uneducated, uninformed, stupid villagers. Of course, immediately the electoral system has become unfair and undemocratic.

About this last one [electoral system]: based on the results on Sunday, in the United Kingdom the Fidesz-KDNP would have got 86% of the seats in Parliament; in France this would have been 72%; in Italy 63%; in Germany, Romania, and Slovakia it would have translated into 53%. In Hungary this number is 67%.

That is, with this election result, Fidesz-KDNP would certainly form a government everywhere, but according to them, the British and French electoral systems are even more anti-democratic than the Hungarian, since there would be almost no opposition.