Hugh Fitzgerald: A Manifesto On Islamic Antisemitism Shows the France That Has Come to Its Senses 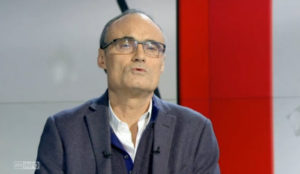 In France a letter, or rather manifesto, denouncing Islamic antisemitism and demanding that Muslims take action, has just been published in a French paper, Le Parisien. It was written by Philippe Val, a former editor of Charlie Hebdo. “‘Ethnic purging’: French stars and dignitaries condemn antisemitism,” AFP, April 21, 2018: The latest attack to rock France took place last month when two perpetrators stabbed Mireille Knoll, an 85-year-old Jewish woman, 11 times before setting her body on fire, in a crime treated as antisemitic. Her brutal death sent shockwaves through France and prompted 30,000 people to join a march in her memory….

It appears that France’s elite is coming to its senses on the subject of Islamic antisemitism. In this letter, several hundred French men and women, many of them well-known political figures, including a former president, three former prime ministers, a former mayor of Paris, prominent writers, singers, film stars, among them Christians, Jews, and five imams who have been outspoken “reformers,” and as a result, are under round-the-clock security.

The letter points out that the current antisemitism has cost the lives of 11 Jews, some of whom were tortured before being killed, the most recent being Mireille Knoll, an 84-year-old woman who had escaped the Holocaust, and who was killed by her Muslim neighbor, whom she had befriended and known for 20 years. Among the other victims have been Ilan Halimi, 24, kidnapped and held by a Muslim gang for three weeks, while he was continuously tortured, and finally died from the torture; a rabbi in Toulouse who, after his two young children and a third Jewish child were murdered in front of him, was then shot to death; 65-year-old Sarah Halimi, who was stabbed eleven times by a Muslim neighbor and then thrown out of a window,  and four shoppers at the HyperCacher, a kosher supermarket in Paris.

This letter makes several important points: for all the absurd talk about Muslims “being the new Jews,” in France it is clear that the “new Jews” are still the Jews. Jews in France are 25 times more at risk of being attacked than are Muslims. And in the last few years, 50,000 Jews in the Parisian region have felt it necessary to move from neighborhoods with Muslim immigrants because of their fears for their own safety, and for the safety, too, of their children, who are bullied by Muslim classmates.

Finally, the manifesto calls for verses of the Koran calling for the “murder and punishment of Jews, Christians and disbelievers” to be removed on the grounds that they are “obsolete.” That’s  a good many verses in the Qur’an that would have to be removed. The uncompromising division of the world between Believer and Unbeliever, Muslim and non-Muslim, is not tangential, but rather central, to Islam.

Muslims were quick to respond. Within a day, they had denounced the letter,  claiming that it unfairly stigmatized Islam.

As reported by Agence France-Presse, the letter sparked anger from Muslims who said their religion was being unfairly “put on trial.”

Unsurprisingly, there was the usual display of victimhood. The signatories were “blaming a whole religion for the actions of an extremist minority.”

It wasn’t an “extremist minority” that drove 50,000 Jews out of their homes in the Parisian region because of physical threats to them and their children from Muslims. Large numbers of neighborhood Muslims had to have made threats or approved of the climate of fear to drive away 50,000 people. “French Muslim community blasts anti-Semitism letter as attack on Islam,” AFP, April 24, 2018:

“The only thing we can agree on is that we must all unite against anti-Semitism,” said Ahmet Ogras, head of the French Council of the Muslim Faith umbrella group.

Dalil Boubakeur, rector of the Grand Mosque of Paris (a man paid by the French state, and always held up as the very model of a moderate Muslim), said the manifesto “subjected French Muslims and French Islam to an unbelievable and unfair trial.”

“It creates a clear risk of pitching religious communities against one another,” he said in a statement.

Notice that Dalil Boubakeur does not take issue, because he can’t, with any of the claims made about the persecution and murder of Jews in France. There has not been, to date, any Muslim outcry over these 11 murders, nor any attempt to express solidarity with the 50,000 Jews who to date have been are being driven from their homes out of fear of Muslims. Why not? Why didn’t any Muslims think they had a responsibility to say something? And now that something has been said, but by the French themselves, how dare these prominent Muslims attack, not antisemitic Muslim murderers and neighborhood bullies, but the defenders of the Jews who have just stepped forward? Why is it that the lonely handful of imams who signed this manifesto, and who have expressed true solidarity with Jews and Christians, have for this been ostracized and threatened by other Muslims, so that they now require round-the-clock security?

But Tareq Oubrou, imam of the Grand Mosque of the southern city of the Bordeaux, pointed out that Islam was not the only religion whose ancient holy texts contain anachronistic passages.

“Any number of holy texts are violent, even the Gospel,” Oubrou said, adding that the signatories, who also included celebrities like actor Gerard Depardieu, had misinterpreted the Koran.

The Tu-Quoque is becoming comical. The Gospel’s “violent” texts describe behavior thousands of years ago, and do not prescribe such behavior for all time. The Qur’an’s verses commanding hatred of, and violence against, Infidels, on the other hand, are prescriptive, as valid now as they were 1400 years ago.

The writer Pascal Bruckner, among those who signed the letter, told France Inter radio it had not been intended “to stigmatise but to spur on the goodwill of reformist Muslims.”

Just how many “reformist Muslims” there are in France, beyond the five imams who signed the manifesto, will soon be apparent. I think Pascal Bruckner is going to be very disappointed.

The letter said that since 2006, “11 Jews have been assassinated — and some tortured — by radical Islamists because they were Jewish”.

The latest attack rocked France last month when two perpetrators stabbed an 85-year-old Jewish woman 11 times before setting her body on fire, in a crime treated as anti-Semitic.

Officially, the number of anti-Semitic crimes fell in France in 2017 for a third year running, according to the interior ministry, down seven percent.

But Jews are the target of about a third of France’s recorded hate crimes despite making up only about 0.7 percent of the population.

The half-a-million-plus Jewish community is the largest in Europe but has been hit by a wave of emigration to Israel in the past two decades, partly due to antisemitism.

This manifesto may represent a watershed. Truths have been told that cannot be un-told: that not the Muslims, but the Jews, are the “new Jews”; that Jews in France are 25 times as likely as Muslims to be the victims of attack; that Muslim antisemitism is virulent and is based on the clear meaning of many Qur’anic verses. Those verses, which preach hatred of Jews, Christians, and other non-Muslims, have to be rendered “obsolete,” the manifesto declares, if France is to remain France. In France, the large-scale presence of Muslims has created a country that is now, for the French and for other, non-Muslim immigrants, much more unpleasant, expensive, and physically dangerous than it would be without that presence. Former Prime Minister Manuel Valls memorably said that “France without its Jews would be unthinkable.” But just how unthinkable would France be without its Muslims? Or, to put it more acceptably, at least without  those Muslims — a great many, alas — who refuse to treat as “obsolete” the Qur’anic verses that preach murder and persecution “of Jews, Christians, and disbelievers”?

No. France has not come to its senses. France is gone.

A manifesto written by a few intellectuals & signed by celebrities doesn’t mean France has changed in any way. The Mohammedan occupation is real and from here on, nothing will change without overwhelming force.

“… the manifesto calls for verses of the Koran calling for the ‘murder and punishment of Jews, Christians and disbelievers’ to be removed on the grounds that they are ‘obsolete.’”

No Muslim, no cleric ever called them “obsolete”. In fact, these verses are the essence of Islam. The annihilation of the other is Islam in its pure form. There isn’t any other Islam, that’s it!

4 thoughts on “Has France Come to Its Senses?”