The Trudeau government has used the controversial Canada Summer Jobs Grant to fund an Islamic group with terror ties, and another with a history of anti-gay rhetoric, the Sun has learned We Need to Talk About Canada: Multiculti Isn’t Working For the first time in history, Saudi Arabia has entered into a joint agreement with the Vatican to build churches for Christians living in the officially Muslim nation.

Saudi Arabia will no longer be the only Gulf state with no public Christian places of worship, after an agreement was signed between local Wahhabi leaders and a Vatican cardinal to establish a cooperative relationship.

Statues of saints and crosses destroyed in five churches in Bamberg

This vandalism could have been done by militant atheists, angry ex-Catholics, any number of people. But such people have been in Germany for years, and there has not been significant vandalism of churches. However, Germany has seen a large influx of Muslim migrants in recent years, many of whom believe that it is an insult to Allah to say that Jesus died on the cross (which the Qur’an also denies at 4:157), and that representations of the human form are temptations to idolatry. Could it be possible that Muslim migrants are behind this vandalism? Or would that be “Islamophobic” even to consider? 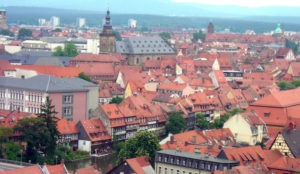 “Statues of saints and crosses destroyed in Bamberg churches,” translated from “Heiligenfiguren und Kreuze in Bamberger Kirchen zerstört,” Kath.net, May 4, 2018

“Stand down, you are not fit for office” ex-Muslim tells Sadiq Khan

AltNewsMedia correspondent and ex-Muslim Shazia Hobbs has delivered a spine-tingling speech in the heart of Britain’s capital city calling on London Mayor Sadiq Khan to resign, telling thousands of people “you are not fit for office.”

You’ll love the array of flavours from the halal street food zone and bring your family and friends along to see the live entertainment that will be continuing throughout the two days. …

In one of the liveliest speeches of the day, Shazia addressed up to 3,000 people in Whitehall, London, during Tommy Robinson’s Day for Freedom event which was spawned following a number of recent high-profile attempts to curtail the views of journalists and political activists. The author and forced marriage campaigner used her platform to attack the London Mayor, reeling off a list of the things London was open for whilst highlighting some of the things that the capital was now closed to.

She accused London of being open to “returning Jihadis”, those who practice female genital mutilation (FGM), knife crime perpetuated in no small part by “Somalian gangs with machetes” and child refugees who deny real children the chance of a new start. And she claimed the metropolitan hub was now closed to anyone wanting to help a post-Brexit Britain like President Donald Trump, people wanting to “tell the truth about Islam” citing the likes of Robert Spencer, Pamela Geller and Lauren Southern who are all now banned from the UK, and maintained that government figures proved that ‘white flight’ meant that London was closing to anyone who identifies as White British. “Go to many areas in London and you won’t hear any English being spoken,” she defiantly told the cheering crowd.

Sadiq Khan’s London is OPEN to Pakistani hate preachers – hate preachers who are banned from addressing large crowds in their homeland are welcome in London and allowed to tour mosques poisoning minds and encouraging a hatred for all things western.

Sadiq Khan’s London is OPEN to those who wish to practice FGM – mutilate your daughter’s vagina and the full force of the law will look the other way.  Instead of punishing those guilty of this barbaric crime the police will organise conferences, campaigns, hashtags and initiate a zero-tolerance day that will mean nothing and result in no arrests. The message to those who force FGM onto their daughters is clear – carry on cutting in Sadiq Khan’s London.

Sadiq Khan’s London is OPEN to the oppression of Muslim women – Muslim women are not being allowed to speak English. Lefties say that encouraging or suggesting that these women learn the English language is racist. They would rather many Muslim women are discouraged from integrating, socialising, working knowing their rights and being able to ask for help. Go to many areas in London and you won’t hear any English being spoken.

Sadiq Khan’s London is OPEN to unlimited immigration – there is not enough houses or jobs to go around yet Sadiq Khan tells the world London is open and that everyone is welcome.

Sadiq Khan’s London is OPEN to knife crime – every other day we hear of another young life lost. The police have said it is social media that’s to blame for knife related crimes, no mention of the Somalian gangs and the machetes they carry and the tribal, sectarian conflicts they bring with them from their homelands. Instead, Khan’s office finds it easier to blame social media in an attempt to deflect attention away from the detrimental impact of importing these child migrants.

Sadiq Khan’s London is OPEN to police corruption – 73 police officers were charged in 2015 -2016 – drug dealers were selling class A on behalf of cops and cops were taking sexual favours from prostitutes in order to allow them to stay on the street corners.

Sadiq Khan’s London is OPEN to rape gangs – gangs whose preference is to rape young underage children, mainly white working-class girls with no fear of intervention from the law.

Sadiq Khan’s London is OPEN to grown men who pose as child refugees and who thereby deny a real child a chance at a new life.

Sadiq Khan’s London is NOT OPEN to any females who wear a dress size smaller than a 12 – thanks to the removal of body positive adverts on the underground – heaven forbid we body shame anyone by looking good ourselves and taking care of our bodies.

Sadiq Khan’s London is NOT OPEN to anyone who will help post Brexit Britain like Trump, our greatest friend and ally.  Khan’s personal feelings are placed above the interests of the nation and his words are spoken outside of the role of his office.  It is not Khan’s place to determine who does and does not enter the UK and he does not speak for the entire population of London.

Sadiq Khan’s London is NOT OPEN to anyone who wishes to tell the truth about Islam – people like Robert Spencer, Pamela Geller and Lauren Southern are all banned from entering the UK.

Sadiq Khan’s London is CLOSING to people who identify as white British. White flight is a real thing and many people have left or are in the process of moving out of London. Have a look over the 2011 consensuses from every London council and borough. The facts speak for themselves. Imagine how bad the number will be when the next figures get released in 2021.

Sadiq Khan ACCUSED me of being a mean tweeter and hurting his delicate feelz, yet Khan and his office can’t even source the author of a tweet because they are so incompetent in spite of the fact they have set up a hate crime hub that is costing the public millions of pounds, to go after all of us free speakers. Mean tweets matter more than knife crime, drug gangs and acid attacks.

I am using my freedom of speech to tell Sadiq Khan you KHAN’T take care of business ‘Stand down, you are not fit for office.’