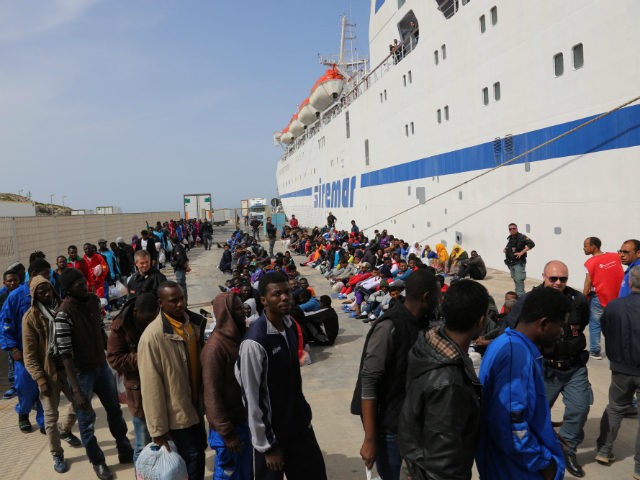 As the Italian hierarchy aligns itself ever more closely with the open-borders movement, the country’s citizens — most of whom are Catholic — seem to be moving in the opposite direction, creating a curious lay-clerical split.

Italy’s interior minister, Matteo Salvini, is now the most trusted politician in the country by a significant margin, a position he has earned above all by his firm stance against unchecked mass migration.

Yet when Salvini refused debarkation rights in late June to the NGO vessel Aquarius that was carrying hundreds of African migrants, the Italian bishops were among those protesting most loudly.

“It is Jesus coming to us on a vessel, he is in the man or child who drowns, it is Jesus who fishes through the garbage in search of a little food,” said Cardinal Francesco Montenegro, archbishop of Agrigento, in his July 1 homily.

Fortunately, the Italians haven’t lost their collective minds, not yet:

Poll: Populist Salvini the Most Trusted Politician in Italy

“Immigrants, the poor, are a thermometer for our faith,” he continued. “Not welcoming them, especially closing our hearts to them, means not believing in God.”

Montenegro went on to blame attempts at curbing mass migration on callousness and indifference.

It’s a society, but unfortunately also a religion that ignores human rights, that creates the poor and then doesn’t want them because they are irksome and lets them die,” Montenegro said.

Yet rank-and-file Italian Catholics have begun raising their voices as well, noting that there is nothing in Catholic doctrine about open borders or relinquishing national sovereignty.

While Cardinal Montenegro was delivering his sermon in Sicily last Sunday, a parish priest in the central Italian province of Teramo named Father Federico Pompei was criticizingMatteo Salvini by name in his own homily, provoking a backlash he did not expect.

A sizable group of the faithful got up and walked out of Mass as the priest preached against Salvini’s immigration policies. Some of them later spoke with local news outlets about the need for the Church to stay out of politics.

“We are all equal, the Church says,” one elderly man told reporters. “But it’s not like that … first come the others, and then the Italians. I never voted for the League but during the next elections I will do so gladly, because now it’s time to think about the Italians.”

“It’s a shame that a parish priest plays politics in Church during Holy Mass,” said another woman visiting from northern Italy. “He should have just said that we need to help our neighbor and left it at that. What’s the point of calling out Salvini?”

Clearly the rift over immigration in the Catholic Church in Italy cannot be broken into neat lines of clergy against laity. Plenty of clerics support the present populist government and plenty of ordinary Catholic citizens favor open borders. One poor bishop, in fact, who dared allow Matteo Salvini — who is Catholic himself — to speak in one of his parishes was lambasted by the ever “tolerant” mainstream media.

At the same time, the more the “official” position of the Church seems to lean toward unchecked immigration — despite its carefully worded doctrines to the contrary — the more a significant portion of the flock will find itself on the opposite side of an eminently political divide.

One thought on “Italian Cardinal: Mohammedan invasion just “like Jesus coming on a vessel””