The crime was not serious enough to apply the full force of the sharia, but the insolent kafir got a fine, allah be pleased! 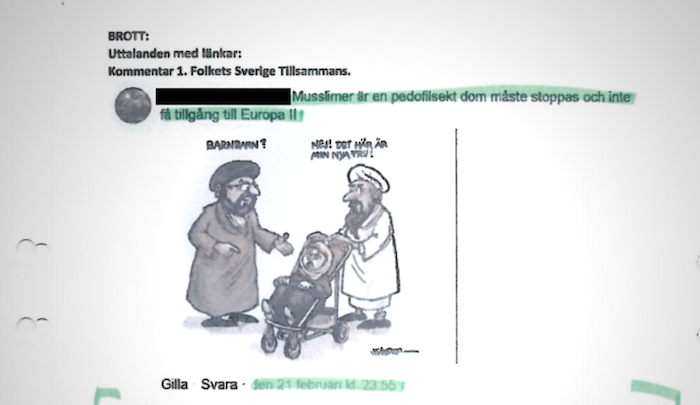 Please click on the link or scroll down below the fold for the full article.

People have now donated $63.000 to this guy, covering his costs. 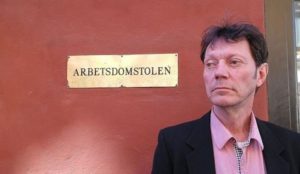 Bernt Herlitz is being severely punished for trying to reveal the age of fake children. Now he has to pay 425 thousand kronor [$48,500] within 30 days to his former employer Region Gotland – money he does not have. The language of the judgment is harsh and at times activist against Herlitz. Previously, Samhällsnytt revealed that several of the people whom he suggested to the Migration Board were discovered to be adults as a result of medical age tests. Despite this and despite some of them being convicted of gross violent crime, they will stay in Sweden, thanks to the amnesty of the government and the Center Party. (More from Jihad Watch) 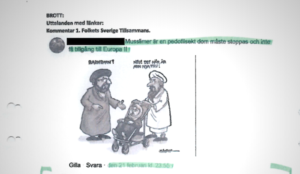 A 64-year-old man in Skåne Hörby was reported by the Network Inspector after posting a satirical image about Islam on Facebook. Now the man has been sentenced to a fine for the breach of acceptable opinion against the public.

The satirical image was drawn by the cartoonist Jan-Erik Ander and shows two men with beards and turbans. One man is holding a pram with a small child, and the other asks: “Grandchild?”

“No, this is my new wife!,” the man with the baby carriage answers.

The 64-year-old man posted the image on February 21, 2017 in a closed Facebook group, in which users discussed childhood marriage in Islam. In a comment on the picture, the man wrote that Muslims were “pedophiles, they must be stopped and given no access to Europe.”

The report was filed in October by the tax-funded Network Inspector. The police investigated the 64-year-old after consulting his “contact person” Robin Enander of the Left-wing Legal Affairs Front.

In a hearing at the police station in Hörby, the man acknowledged the facts, but denied committing any crime.

“It was mostly fun, it was not meant so maliciously. I usually comment with humor and I thought it was humor. I posted the image because it was humorous,” he said, among other things.

Court prosecutor Mathias Larsson charged the man for both the satirical image and his commentary on the image. According to the prosecutor, the post indicated that the 64-year-old “threatened or expressed disagreement with the public or another group of persons on the basis of race, color, national or ethnic origin or creed.”

Lund’s District Court made the same assessment of “the entire text, with both text and image.”

“The district court is of the opinion that the speech expresses a clear contempt for people of the Muslim creed. It implies that Muslims would generally be pedophiles and that pedophilia would be part of the religion of Islam. It has also been devised in an abusive and inconsiderate manner, and does not invite some profound religion-critical discussion,” the court wrote.

The crime was not serious, the district court determined, as it gave the man a conditional sentence with 60 daily fines of SEK 50 for hatred against the public.