RT calls them “migrants”, as if they had a god-given right to waltz into Europe. They might change their tune once they start migrating into Russia, but I won’t hold my breath. 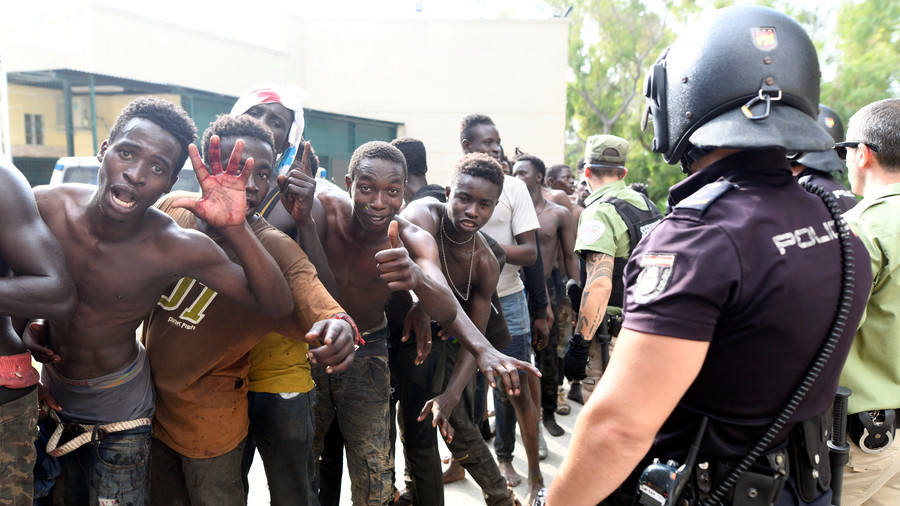 African immigrants celebrate as they enter the immigrant center in Ceuta on Wednesday
.
Seven police officers suffered acid and lime burns as more than 100 sub-Saharan migrants jumped the border fence that separates Morocco from Spain’s north African exclave of Ceuta.

Approximately 300 people tried to enter European territory by storming the fence on Tuesday night. Press reports state that as many as 200 were successful, however officials in the autonomous city say they have only accounted for 115 new arrivals

The migrants cut part of the, 8.4km-long (5.2 mile) fence and used battery acid, quicklime and excrement to attack police officers, El Pais reports. The police revealed on Twitter that seven members of the force suffered injuries during the incident.

Because of vacations, the border was manned by fewer than 10 agents when the migrants chose to storm the fence. Numbers were also reduced because it was the first day of the Eid al-Adha Muslim festival. The Unified Association of the Civil Guard (AUGC) police representative group has long been critical of the shortage of officers manning the border.

Once inside the fence the migrants raced through the streets in a bid to reach the Temporary Immigrant Stay Center (CETI). The Red Cross treated the migrants who suffered cuts and bruises when they arrived there.

Local news outlet El Faro de Ceuta published video footage of the migrants running around in the city after breaching the border. They can be heard shouting “Boza! Boza!”, which means “victory” in, the west African language of Fula.

The Ceuta border fence is regularly breached by large groups of migrants looking to get into Europe. In late July, more than 700 people stormed the fence and more than 600 of them managed to cross the barrier in what Spanish police described as one of “the most violent and numerous entries” of migrants in recent months.