Islamic Terrorism Will End — When Islam Has Conquered the World 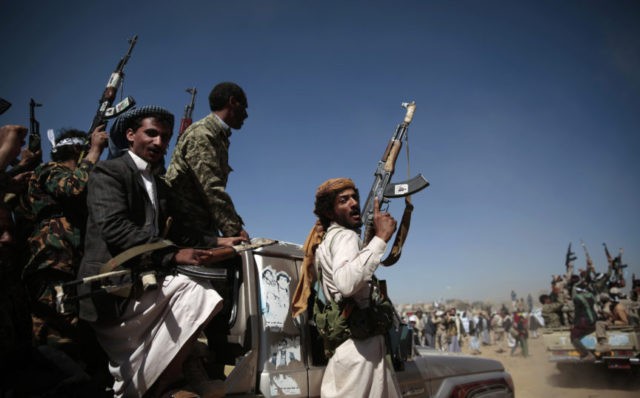 The level of vicious anti-Americanism and anti-Semitism fed to children by the Houthis may come as a surprise to American news consumers who think of them as merely a political or tribal insurgency.

As MEMRI explains, the Houthis run summer camps in the areas they control, including Yemen’s capital city of Sanaa, to recruit young people into armed militia groups. The Houthi program took over summer camps established by the Yemeni Youth and Sports Ministry before the internationally-recognized government was overthrown.

A reading and writing exercise in one of the booklets requires the pupils to read and copy various sentences. Among them are familiar slogans of the Iranian regime and the Houthi Ansar Allah movement, such as “death to America,” “death to Israel,” “America is the Great Satan,” “curse the Jews,” “victory for Islam,” and “we are Ansar Allah.”

“Ansar Allah” means “Servants of God,” but more pertinently, it is the name the Houthis use for themselves. The Houthi movement has always included a strong theological component, not just a demand for regional or tribal autonomy.

The former president of Yemen, Ali Abdullah Saleh, forged an alliance with the Houthis believing he could use them as muscle in a secular power play. His usefulness to the Houthis expired in late 2017, six years after the insurgency picked up steam during the “Arab Spring,” and Saleh himself expired shortly thereafter. The Houthis made a point of displaying Saleh’s bullet-riddled corpse on their TV stations as a trophy.

MEMRI also posted the text of a poem called “Husseinis” taught to children at Houthi summer camp. The title is a reference to Shia Islam, the brand of Islam practiced by the Houthis and their Iranian patrons. Yemen is about 60 percent Sunni Muslim, including most of the government-in-exile, which is supported by a coalition of Sunni powers led by Saudi Arabia.

The poem reads as follows:

Ali alone is our patron, and the pure descendants of the Prophet.

We are men always willing to sacrifice our souls for our Lord, the Lord of the Worlds.

Yes, let the entire world hear: we shall sacrifice [our souls] to live in honor.

We have risked our lives for Allah’s religion, so that men and faith can live upon the earth.

Tell the enemies about us. We shall continue to be jihad fighters, as they have become accustomed [to seeing].

We say to every stubborn tyrant: Our Lord will keep [us] from living in [a state of] surrender.

We Husseinis do not fear Yazid, and shall not bow our heads before America.

Tell America that we shall remain armed from head to toe.

[We are] jihad fighters, we say ‘Allah Akbar,’ America will surely perish today.

We wish Israel and the imperialists death [and an afterlife] in hell.

We curse every Zionist and hope he remains despised, cowed and humiliated forever.

We have declared: we fight for the sake of Allah. That is the promise of the Lord of the Worlds.

“Ali” is Imam Hussein bin Ali, grandson of Mohammed and a pivotal figure in Shiite theology.

“Yazid” is Yazid bin Muawiya, the killer of Hussein bin Ali, and obviously not a popular fellow among Shiites. Linking the United States to Yazid is a way of saying that America is a mortal enemy of the true Islamic faith.

Yazid was a caliph (Muslim monarch) who killed Ali while the latter was leading an insurgency against his rule, making the reference to him a pointed metaphor for the kids at Houthi Summer Jihad Camp. Shiites also tend to invoke Yazid as an avatar of corruption and unjust government.

The nature of the Houthis as a jihad movement, rabid anti-Americans and anti-Semites, allies of terrorist groups like Hezbollah, and puppets of Iran is important to formulating policy for Yemen. It matters a great deal whether they are a purely local insurgency or a jihad group with regional and global aspirations.

After long denying they were supporting the insurgency, Iranian commanders have lately been slipping up and admitting they are not only providing the Houthis with missiles but also helping them choose Saudi targets. The unquestionable brutality of the Yemeni civil war must be measured against the danger of allowing Yemen to become one sharp point on the Iranian crescent.