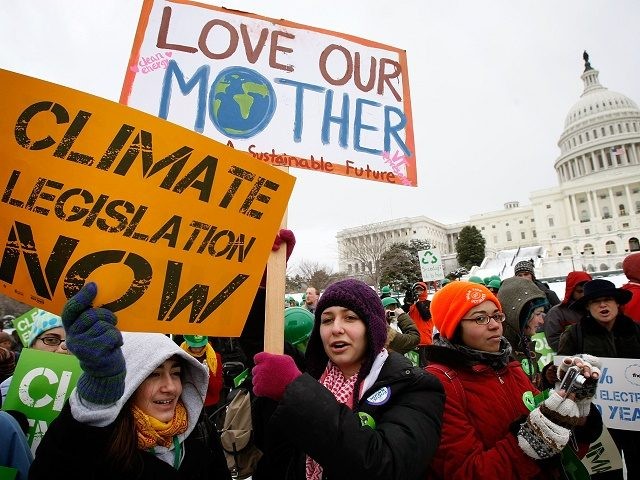 The alarmists have come up with an exciting new name for climate change: Hothouse Earth.

As we’ll see, shortly, this has nothing whatsoever to do with new discoveries or indeed plausible scientific evidence of any kind. As usual, it’s just propaganda by the usual suspects on their usual mission to usher in an era of fascistic “global governance” where democratically unaccountable “experts” police every last detail of our lives.

Hothouse earth – aka ‘climate change’; aka ‘global warming’; aka ‘global climate disruption’; aka ‘global weirding’ – was invented by a bunch of activists at a hitherto deeply obscure scientific institution calling itself Stockholm Resilience Centre. Until they got a study published last week nobody – probably not even the people who work there – had heard of the place.

But because Stockholm Resilience Centre said all the right scary things about the imminence of global man-made climate doom, the left-wing media treated it like the voice of God.

According to the BBC‘s breathless account of the Stockholm Resilience Centre’s study:

It may sound like the title of a low budget sci-fi movie, but for planetary scientists, “Hothouse Earth” is a deadly serious concept.

Researchers believe we could soon cross a threshold leading to boiling hot temperatures and towering seas in the centuries to come.

Even if countries succeed in meeting their CO2 targets, we could still lurch on to this “irreversible pathway”.

What the “authors” of this alleged “study” have done is simply create a mash-up of all the implausible, scientifically-dubious doomsday scenarios which have been advanced thus far by the alarmist community – and transformed them into the mother of all climate scare stories.

The authors of the study consider ten natural feedback processes, some of which are “tipping elements” that lead to abrupt change if a critical threshold is crossed. These feedbacks could turn from being a “friend” that stores carbon to a “foe” that emits it uncontrollably in a warmer world.

“These tipping elements can potentially act like a row of dominoes. Once one is pushed over, it pushes Earth towards another. It may be very difficult or impossible to stop the whole row of dominoes from tumbling over. Places on Earth will become uninhabitable if “Hothouse Earth” becomes the reality,” warns co-author Johan Rockström, former executive director of the Stockholm Resilience Centre and incoming co-director of the Potsdam Institute for Climate Impact Research.

Yeah right. It’s when you get to the next part of their summary that all is explained. This is yet another stunt by global governance freak Hans Joachim Schellnhuber.

Hans Joachim Schellnhuber, Director of the Potsdam Institute for Climate Impact Research, says, “We show how industrial-age greenhouse gas emissions force our climate, and ultimately the Earth system, out of balance. In particular, we address tipping elements in the planetary machinery that might, once a certain stress level has been passed, one by one change fundamentally, rapidly, and perhaps irreversibly. This cascade of events may tip the entire Earth system into a new mode of operation.”

“What we do not know yet is whether the climate system can be safely ‘parked’ near 2°C above preindustrial levels, as the Paris Agreement envisages. Or if it will, once pushed so far, slip down the slope towards a hothouse planet. Research must assess this risk as soon as possible.”

Though little known outside climate alarmist circles, Schellnhuber is one of the chief architects of the great global warming scare. Schellnhuber, a Gaia-worshipping Malthusian who once claimed that earth has a “carrying capacity” of just one billion – meaning, presumably, the rest of us (now approaching eight billion) are redundant – is the man who invented the (completely arbitrary) 2 degrees Celsius “tipping point.” This claim, regularly cited at UN climate conferences, posits that if  “global warming” is allowed to increase by more than 2 degrees Celsius above pre-industrial levels then it will result in unstoppable climate catastrophe. There is no scientific evidence to back this up. It’s just an arbitrary figure, plucked from the air, in order to scare politicians into “decarbonising” their economies and embracing renewables. Yet now the alarmist community and all the senior figures Schellnhuber advises – among them, Germany’s Chancellor Angela Merkel and Pope Francis – treat these made up facts as gospel.

This isn’t science. This is an eco-fascist manifesto for global governance.

Here are the sections in the “study” that give the game away.

We suggest that a deep transformation based on a fundamental reorientation of human values, equity, behavior, institutions, economies, and technologies is required. Even so, the pathway toward Stabilized Earth will involve considerable changes to the structure and functioning of the Earth System, suggesting that resilience-building strategies be given much higher priority than at present in decision making. Some signs are emerging that societies are initiating some of the necessary transformations. However, these transformations are still in initial stages, and the social/political tipping points that definitively move the current trajectory away from Hothouse Earth have not yet been crossed, while the door to the Stabilized Earth pathway may be rapidly closing.

Collective human action is required to steer the Earth System away from a potential threshold and stabilize it in a habitable interglacial-like state. Such action entails stewardship of the entire Earth System—biosphere, climate, and societies—and could include decarbonization of the global economy, enhancement of biosphere carbon sinks, behavioral changes, technological innovations, new governance arrangements, and transformed social values.

Most people remain stubbornly uninterested in the idea that climate change is a serious problem. In countless surveys, global warming comes bottom of people’s worries about the world. So how, given this, do the report’s authors think we are going to effect that “deep transformation based on a fundamental reorientation of human values”?

Well the clue is in that sinister phrase “new governance arrangements”.

If it doesn’t creep you out, it should.

Here’s one of the report’s authors going into more detail in a sympathetic left-wing publication:

Asked what could be done to prevent a hothouse earth scenario, co-author Will Steffen told The Intercept that the “obvious thing we have to do is to get greenhouse gas emissions down as fast as we can. That means that has to be the primary target of policy and economics. You have got to get away from the so-called neoliberal economics.” Instead, he suggests something “more like wartime footing” to roll out renewable energy and dramatically reimagine sectors like transportation and agriculture “at very fast rates.”

As Jonah Goldberg notes in his classic Liberal Fascism this notion of a crisis so grave that it can only be solved by putting the economy on a “war footing” – in other words under complete state control – is one of the defining characteristics of fascist regimes throughout history.

What’s so extraordinary is that instead of subjecting this dangerous nonsense to proper critical scrutiny our mainstream media have enthusiastically promoted it.

Here – per Christopher Booker – is how the BBC handled the story on its flagship Radio 4 Today programme:

First interviewed was one of the report’s authors, who made the astonishing claim, completely unchallenged, that, thanks to our burning of fossil fuels, we are now seeing “the highest temperatures on Earth since the last ice age”. It has long been established by proper science that in the Holocene Optimum, which followed the end of that last glaciation 12,000 years ago, parts of the Earth, for three millennia, were often far hotter than they are today.

But next we only had a senior official of the UN body which organised the Paris conference to echo this message in spades. What, of course, we never hear from the BBC is that the Paris accord was no more than empty wishful thinking. The latest official figures from China show that, as already the world’s greatest CO2 emitter, it is still building ever more coal-fired power stations – exactly as most non-Western countries indicated was their intention just before Paris. Even the accord conceded that CO2 levels would continue to rise after 2015 to 40 percent above their 2005 level.

The whole premise of this latest is so wholly ridiculous that, if it had been in any other field of science it would have instantly dismissed as juvenile fantasy rambings with no evidence at all.

But, unfortunately, this is climate science, where any poorly qualified hack with a taste for easy grant money can publish whatever nonsense they want, in the knowledge that the corrupt pal review system will give it the nod, and that the complicit left wing media will give it top billing as indisputable truth.

Our liberal Establishment simply cannot be allowed to get away with promulgating this nonsense any longer. The consequences, if it is taken seriously, are simply too severe. And in any case, no normal person actually believes this stuff – so why should we be forced to comply as if we do?