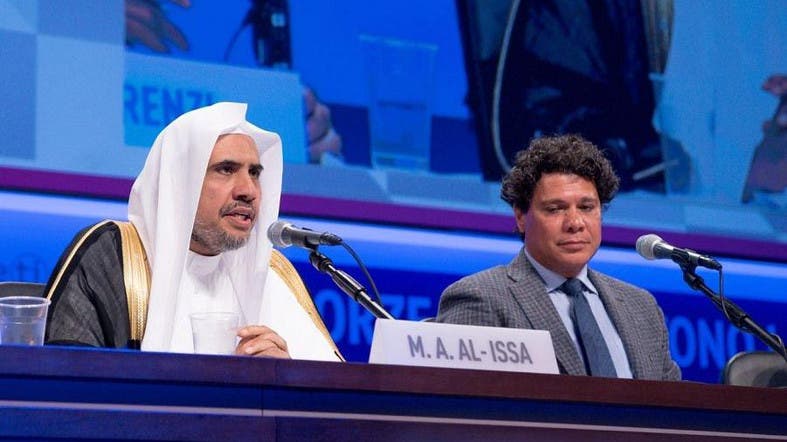 The Secretary General of the Muslim World League, Dr. Mohammed bin Abdulkarim al-Issa, said in a conference held in Italy on Tuesday that struggles among communities should be replaced by dialogue and understanding based on a mutual respects.

Al-Issa’s statement came during the 39th Meeting for Friendship among people held in Rimini in Italy, where he stressed in his message which represents 1.8 billion who are committed to a religion that calls for values of peace and promotes the building of bridges of peace and harmony in all issues, especially issues related to minority rights, women’s rights, migration, national integration, human trafficking, poverty and ignorance.

The meeting e was held under the theme “The forces that move history are the same that make man happy,” and was attended by more than 5,000 people from around the world and will run for one week tackling political, religious, intellectual and scientific topics.

The chief of the Muslim World League emphasized that the will of the creator has decreed that human should be diverse in colors, languages, religions, creeds, ideas and cultures, pointing out that God has honored everyone and has not excluded anyone saying: “Only pure hearts filled with love and goodness can enjoy God’s mercy and justice and see in this diversity a human richness that promotes dialogue, coexistence, cooperation and peace.”

The chief of the Muslim World League stressed that: “There is no religion whose origin is extremist, and in every religion there are extremists. The theories of some philosophies are intellectual hallucination rather than a philosophical logic. There is an extremism and a counter extremism.”

Dr. al-Issa further added that any religion incompatible with life cannot survive for more than 1400 years, the age of Islam to this day, saying: “Islam is still among the most widely spread religions in terms of geography and growth.”

He stressed that it is neither logical nor fair to reduce Islam to an extremist group that does not exceed according to the Muslim World League’s statistics, one in 200,000 Muslims who represent moderate Islam.

Dr. al-Issa further stressed during the meeting, which discussed the concepts of Islamic ideology, culture and civilization, that “evil spreads hatred, wars and injustice, classifying people on the basis of racism, exclusion and clashes of civilizations, creating conflicts not peace and harmony, establishing a theory which says that diversity means conflict.”