Muslim men in India who use instant divorce will face jail term up to three years, according to an executive order. 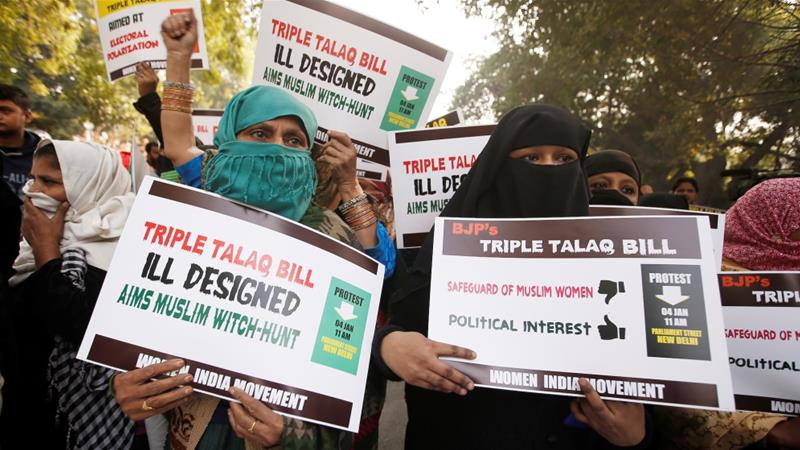 New Delhi, India – India’s government on Wednesday decided to make the practice of instant triple talaq (divorce) a punishable offence through an executive order after the draft law failed to pass in parliament in August.

Under the proposed law, Muslim men who end their marriage using instant divorce, or talaq-e-biddat, will now face a jail term of up to three years and a fine.

The Muslim Women (Protection of Rights on Marriage) Bill 2017, introduced by the Narendra Modi government in parliament last year, could not be passed due to lack of consensus.

This step is only to target Muslim men.

Opposition parties had criticised some of the stringent provisions of the draft law, including non-bailable arrest.

What is ‘triple talaq’ or instant divorce?

The country’s Supreme Court last year banned “triple talaq” practised by some in the Muslim community, saying it was “unconstitutional”.

On Wednesday, India’s Minister of Law and Justice Ravi Shankar Prasad told a news conference that the government was forced to issue the order because the practice persisted despite the top court decision last year.

Under the new government order, police will take cognisance of an offence if a victim of this practice or her blood relative file a case, the minister said. A magistrate can grant bail to the accused in this case only after hearing the wife, he added.

“This is a bad decision. They could not pass it in parliament, now they have brought an executive order. The Supreme Court has already said it is invalid. So if something is invalid already, how can it be a crime?” Agnes asked.

“The effect on women of instant triple talaq and desertion of wives is the same. So many men, Hindus and Muslims, desert their wives, that should also be criminalised. Why are you not doing anything about that? This step is only to target Muslim men,” she added.

“We welcome this. The Muslim woman is happy today because she wants legal protection.”

India, which is home to the world’s third-largest Muslim population, allows most religions, including Muslims to regulate matters such as marriage, divorce and inheritance through their own personal laws.

Decades of campaigning by women’s groups and victims had led to the Supreme Court’s ruling last year abolishing the practice. Although many Muslim scholars and analysts argue that the percentage of instances of “instant triple talaq” is very low.

Quran does not mention instant divorce

Zia Us Salam, author of Till Talaq Do Us Part, says “the practice of instant triple talaq does not have sanction of the Quran.”

“The Quran clearly outlines the procedure for divorce and all Muslims should follow that process. Nowhere in the Quran do we find any mention of instant divorce,” he told Al Jazeera.

“India’s ulema or Muslim clergy should have handled this on their own and rectify this social practice. But India’s Supreme Court while striking down triple talaq as unconstitutional has basically reiterated what the Quran says,” he added.

The Quran clearly outlines the procedure for divorce and all Muslims should follow that process. Nowhere in the Quran do we find any mention of instant divorce.

ZIA US SALAM, AUTHOR OF TILL TALAQ DO US PART

“We welcome this. The Muslim woman is happy today because she wants legal protection. Despite the Supreme Court order, instant triple talaq has been taking place, so we needed this to be criminalised,” Soman told Al Jazeera.

It is prevalent among India’s Muslim community majority of whom follow the Hanafi Islamic school of law.

This mode of divorce is not universal among Muslims across the world, as many other Islamic schools of thought prefer the divorce process to be deferred, in many cases over a period of three months.

The subject of religious personal laws and suggestions of alterations have been a matter of spirited debate in the country over the past few decades. Wednesday’s move could spur Modi’s BJP party to push again for its long-held desire for a uniform civil code.

“We have been advocating that instant triple talaq should not happen. We have said anyone who practices this method should be boycotted. But it takes time for societal changes to happen,” Kamal Faruqui, a member of the All India Muslim Personal Law Board, told Al Jazeera.

“My country’s laws are already strong enough to punish anyone who does this, no need for additional laws,” he added.