Croatian officers accused of physical and verbal abuse, along with harassment including theft, but deny all allegations. 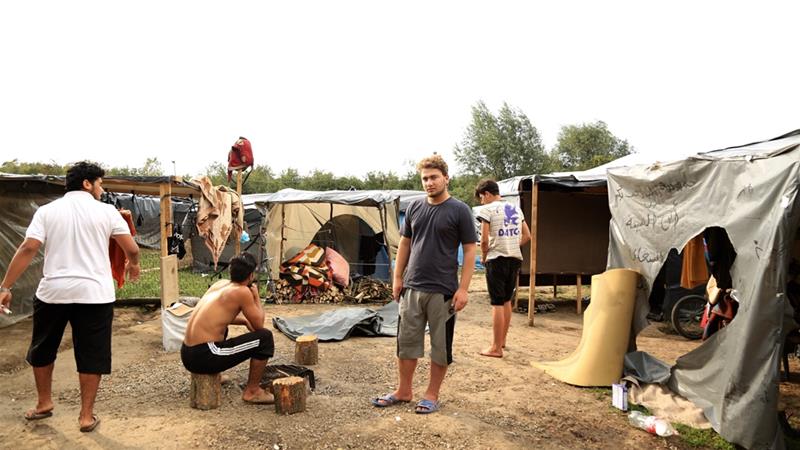 This year, more than 13,000 refugees and migrants have so far arrived in Bosnia, compared with only 755 in 2017 [Mersiha Gadzo/Al Jazeera]

These are some of the experiences refugees and migrants stranded in western Bosnia report as they describe encounters with Croatian police.

The abuse, they say, takes place during attempts to pass through Croatia, an EU member, with most headed for Germany.

Bosnia has emerged as a new route to Western Europe, since the EU tightened its borders. This year, more than 13,000 refugees and migrants have so far arrived in the country, compared with only 755 in 2017.

In Velika Kladusa, Bosnia‘s most western town beside the Croatian border, hundreds have been living in makeshift tents on a field next to a dog kennel for the past four months.

When night falls, “the game” begins, a term used by refugees and migrants for the challenging journey to the EU through Croatia and Slovenia that involves treks through forests and crossing rivers.

However, many are caught in Slovenia or Croatia and are forced to return to Bosnia by Croatian police, who heavily patrol its EU borders.

Then, they have to start the mission all over again.

Some told Al Jazeera that they have attempted to cross as many as 20 times.

The use of violence is clearly not acceptable. It is possible to control borders in a strict matter without violence.

All 17 refugees and migrants interviewed by Al Jazeera said that they have been beaten by Croatian police – some with police batons, others punched or kicked.

According to their testimonies, Croatian police have stolen valuables and money, cut passports, and destroyed mobile phones, hindering their communication and navigation towards the EU.

“Why are they treating us like this?” many asked as they narrated their ordeals.

“They have no mercy,” said 26-year-old Mohammad from Raqqa, Syria, who said he was beaten all over his body with batons on the two occasions he crossed into the EU. Police also took his money and phone, he said.

“They treat babies and women the same. An officer pressed his boot against a woman’s head [as she was lying on the ground],” Mohammad said. “Dogs are treated better than us … why are they beating us like this? We don’t want to stay in Croatia; we want to go to Europe.”

Mohammad Abdullah, a 22-year-old Algerian, told Al Jazeera that officers laughed at a group of migrants as they took turns beating them.

“While [one of them] was beating me, he kissed me and started laughing. They would keep taking turns beating us like this, laughing,” Abdullah said.

In an emailed statement, it said those attempting to cross borders know they are acting outside of the law, and claimed that “no complaint so far has proved to be founded.”

At a meeting in late August with Croatian Prime Minister Andrej Plenkovic, German Chancellor Angela Merkel praised Croatia for its control over its borders.

“You are doing a great job on the borders, and I wish to commend you for that,” Merkel said.

But according to a new report, the UNHCR received information about 1,500 refugees being denied access to asylum procedures, including over 100 children. More than 700 people reported violence and theft by Croatian police.

Al Jazeera was unable to independently verify all of the claims against police, because many of the refugees and migrants said their phones – which held evidence – were confiscated or smashed. However, the 17 people interviewed separately reported similar patterns of abuse.

Shams and Hassan, parents of three, have been trying to reach Germany to apply for asylum, but Croatian authorities have turned them back seven times over the past few months.

Four years ago, they left their home in Deir Az Zor, Syria, after it was bombed.

Shams, who worked as a lawyer in Syria, said Croatian policemen strip-searched her and her 13-year-old daughter Rahma on one occasion after they were arrested.

The male officers handled the women’s bodies, while repeating: “Where’s the money?”

They pulled off Shams’ headscarf, threw it on the ground and forced her to undress, and took Rahma into a separate room.

“My daughter was very afraid,” Shams said. “They told her to take off all her clothes. She was shy, she told them, ‘No.’

“They beat her up and stripped her clothes by force, even her underwear.

“She kept telling them ‘No! No! There isn’t [any money]!’ She was embarrassed and was asking them to close the window and door so no one would see her. [The officer] then started yelling at her and pulled at her hair. They beat her up.”

Rahma screamed for her mother but Shams said she couldn’t do anything.

“They took 1,500 euros ($1,745) from me and they took my husband’s golden ring. They also broke five of our mobiles and took all the SIM cards … They detained us for two days in prison and didn’t give us any food in the beginning,” Shams said, adding they cut her Syrian passport into pieces.

“They put my husband in solitary confinement. I didn’t see him for two days; I didn’t know where he was.”

A senior policeman told Shams that she and her children could apply for asylum, but Hassan would have to return to Bosnia.

When she refused, she said the police drove the family for three hours to a forest at night and told them to walk back to Bosnia.

They did not have a torch or mobile phone.

She said they walked through the forest for two days until they reached a small town in western Bosnia.

“No nation has the right to treat people this way,” Shams said.

In another instance, they said they were arrested in a forest with a group of refugees and migrants. All 15 of them were forced into a van for two hours, where it was difficult to breathe.

No Name Kitchen, a volunteer organisation that provides assistance to refugees and migrants on the Balkan route, has been documenting serious injuries on Instagram.

In one post, the group alleges that Croatian police twice crushed a refugee’s orthopaedic leg.

Peter Van der Auweraert, the Western Balkans coordinator for the International Organization for Migration, says he has heard stories of police brutality, but called for an independent investigation to judge how alleged victims sustained injuries.

“Given the fact that there are so many of these stories, I think it’s in everyone’s interest to have an independent inquiry to see what is going on, on the other side of the border,” Van der Auweraert said.

Shams’ family journey from Syria was traumatic from the get-go, and they have spent and lost several thousand euros.

While travelling in dinghies from Turkey to Greece, they saw dead bodies along the way.

“We call upon Merkel to help us and open the borders for us. At least for those of us stuck at the borders,” she said. “Why is the EU paying Croatia to prevent our entry into the EU, yet once we reach Germany, after spending a fortune with lives lost on the way, we’ll be granted asylum?”

“We have nothing,” said her husband Hassan. “Our houses have been destroyed. We didn’t have any problems until the war started. We had peace in our homes. Is there a single country that accepts refugees?”

“There are countries but there’s no way to reach them,” Shams replied. “This is our misery.”