Asking Muslims If We Can Criticize Islam – Sydney, Australia with Armin Navabi

“Palestinians” claim Muslim who murdered Israeli was the real victim 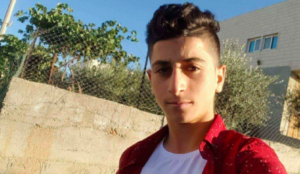 Yesterday, a Palestinian teenager, Khalil Jabarin, stabbed and murdered Israeli Ari Fuld in the parking lot of a supermarket. Before succumbing to his wounds, Fuld, together with another civilian, shot and wounded Jabarin, which led to his capture.

Today, the PA is portraying terrorist murderer Jabarin as a victim of an unprovoked Israeli shooting. The headline in the official PA daily indicated that he had not even attacked anyone:

Headline: “The shooting and wounding of the boy Khalil Jabarin, and his arrest claiming that he killed a settler next to ‘Etzion’” (emphasis added)

The report continued to insinuate this, stating that Jabarin “stabbed a settler according to the Israeli occupation’s version,” and even accused Israel of neglecting the injured terrorist, claiming he was “left bleeding on the ground for more than 20 minutes”:

“The boy Jabarin was wounded by a number of bullets fired by the occupation’s soldiers (sic., by two Israeli civilians, one of whom Jabarin had just stabbed and mortally wounded) next to the ‘[Gush] Etzion’ Junction, and this was after he stabbed a settler according to the Israeli occupation’s version. He was left bleeding on the ground for more than 20 minutes, and then was transferred to the hospital. Jabarin is an 11th grade student in a science study track.”

This is a typical example of the PA’s modus operandi whenever a terrorist is killed or injured while committing a terror attack. The PA routinely describes Israel’s self-defense measures to stop the terrorist as an attack on the Palestinian terrorist who is portrayed as an innocent “victim.” Palestinian Media Watch reported extensively on this PA tactic during the terror wave in 2015/16, when the PA and Fatah claimed that the many terrorists committing stabbing attacks were “innocent” victims.…

2 thoughts on “Sharia is the law. If you mock Islam we kill you….”