Why is this even remotely controversial? Because the denial and willful ignorance regarding the Muslim rape gangs’ connection to Islam is nigh universal in Britain today. In reality, however, the connection is obvious. One survivor of a Muslim rape gang in the UK said that her rapists would quote Quran to her, and believed their actions justified by Islam. 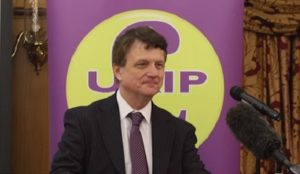 UKIP leader Gerard Batten has linked Islam to the “industrialised sexual exploitation” of girls across the country.

“The ideology of the religion does actually traditionally throughout its history make sex slaves legitimate. Their prophet had sex slaves,” he said.

Challenged by Sky News presenter Gillian Joseph, he replied: “It’s in the Hadith and the Koran. It’s a tradition that that’s okay to do that.

“People take their prophet as the model for all time and the perfect human being, so if he did something then it’s okay for other people to do it.

Questioned again by the presenter that he was attacking the entire religion of Islam, he said: “It does allow their followers to take sex slaves who are not of the same religion.

“It is no good telling me and the world it doesn’t happen because everybody knows it does happen.

Mr Batten was asked why he isolated the sexual grooming of victims in areas such as Rotherham in south Yorkshire as a Muslim crime – and did not condemn other sexual crimes such as those committed by members of the Catholic Church.

Mr Batten said: “It is predominantly people who follow that religion who are causing this problem – on a national scale – which is the industrialised sexual exploitation for money and for their own perverted purposes. That happens to be a fact.

“I am happy to condemn paedophilia and child abuse and sexual abuse wherever it occurs – it is reprehensible whoever commits it.”

Asked if he still stood by his opinion that Islam is a “death cult”, he added: “Study its history for the last 1,400 years and take an impartial look at it and you might come to that view as well.”…