There are buyers and sellers of this nonsense. Metropolitan Police Moonbat Neil Basu is an eager buyer:

The general view of the counter-terror establishment is that jihad comes from poverty and lack of opportunity, so that if we shower Muslim communities with cash, all will be well and the jihad will fade away. In reality, jihadis will see that largesse as payment of the jizya, which is their due from the Infidels, and continue to plot their jihad activity.

The top counter-terror cop in the UK should know that, but of course, reality is forbidden in the British government.

Grand Imam of Al-Azhar Ahmed el-Tayyeb is a skilled vendor of Mohammedan grievances:

This is the kind of lie that has captured many on the left who are too self-absorbed to pay attention to history:

Terrorism results from international unjust policies that lost all compassion toward the weak and the poor, Grand Imam of Al-Azhar Ahmed el-Tayyeb said during his speech in the Sixth Congress of Leaders of World and Traditional Religions in Kazakhstani capital, Astana.

Jihad terror has existed as a means to an end (Islamic conquest and the imposition of Sharia) for 1,400 years, and it is not about to change, no matter what Westerners or anyone does. It is not the first time that the revered Grand Imam of Al-Azhar justified jihad terror as a response to what he and other Islamic supremacists claim are “unjust policies.” After the American Embassy move to Jerusalem, el-Tayyeb said that because of the decision, the East and West will drown in a sea of blood.

Tayyeb is a respected authority in Islam, and in his sermon that justified jihad violence, he “urged preachers to abide by the moderate teachings of Islam in line with what they learnt at Azhar” — the world’s most renowned Sunni Islamic learning institution, which functions to “disseminate the upright teachings of Islam.” (Al Azhar also has taught that cannibalism of disbelievers is permissible.) 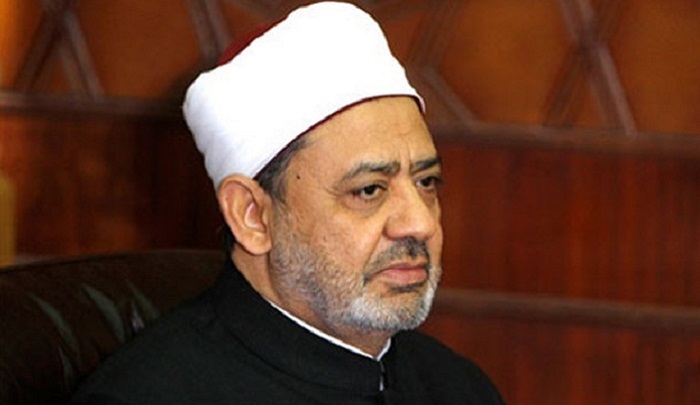 CAIRO – 10 October 2018: Terrorism results from international unjust policies that lost all compassion toward the weak and the poor, Grand Imam of Al-Azhar Ahmed el-Tayyeb said during his speech in the Sixth Congress of Leaders of World and Traditional Religions in Kazakhstani capital,Astana.

Tayyeb added that terrorism cannot be a result of Islam or any other religion. He explained that the strategies, techniques and plans of the well-trained extremist and armed groups indicate that “this kind of transcontinental hatred cannot be just a result of religion.”

Abbas advisor: Conflict with Israel is part of “the battle of history between Islam and the enemies of Islam”

It becomes abundantly clear that the “enemies of Islam” are those non-Muslims who refuse to accept the hegemony of Sharia and the second-class status that acceptance would entail for them. Those non-Muslims, according to the Qur’an (9:29), have to be warred against and subjugated.

Those who think that the Israeli / “Palestinian” conflict will be solved through negotiations should heed the words of Mahmoud Al-Habbash. But they won’t.

Tayyeb arrived in Astana on Monday, Oct. 8, as per an invitation from President Nursultan Nazarbayev. Upon his arrival, Tayyeb met with several Kazakhstani officials, including President Nazarbayev.

According to Astana Times, the first Congress of Leaders of World and Traditional Religions took place on Sept. 23-24, 2003. The objectives of the congress are to establish universal guidelines and a permanent platform for international interfaith dialogue.

Eighty-two delegations from 46 countries representing the world’s religions are participating in the conference which kicked off on Wednesday, Oct. 10 and is expected to continue until Thursday, October 11.

Tayyeb led the evening prayer at Hazrat Sultan Mosque, one of the largest mosques in Asia, on Tuesday, Oct. 9. After the prayer, Tayyeb delivered a sermon in which he urged preachers to abide by the moderate teachings of Islam in line with what they learnt at Azhar…..