‘You guys are cockroaches’: Niqab-wearing Muslim woman lashes out outside home of one of the Melbourne ‘terror’ trio accused of plotting a massacre – as neighbours reveal he had started praying in his garage

A young Muslim woman draped head-to-toe in a black niqab lashed out at people outside an alleged terrorist’s home as it was raided by police.

‘You guys are cockroaches,’ she yelled.

Police raiding the home of Ertunc Eriklioglu, 30, in Dallas, in Melbourne’s north west, told the woman three times to move her car from the front of the property.

Yet, she continued to block other residents and workmen inside the block of units throughout the morning.

Police were raiding the home as part of their operation which led to three Australian Muslim men of Turkish background being arrested on Tuesday. 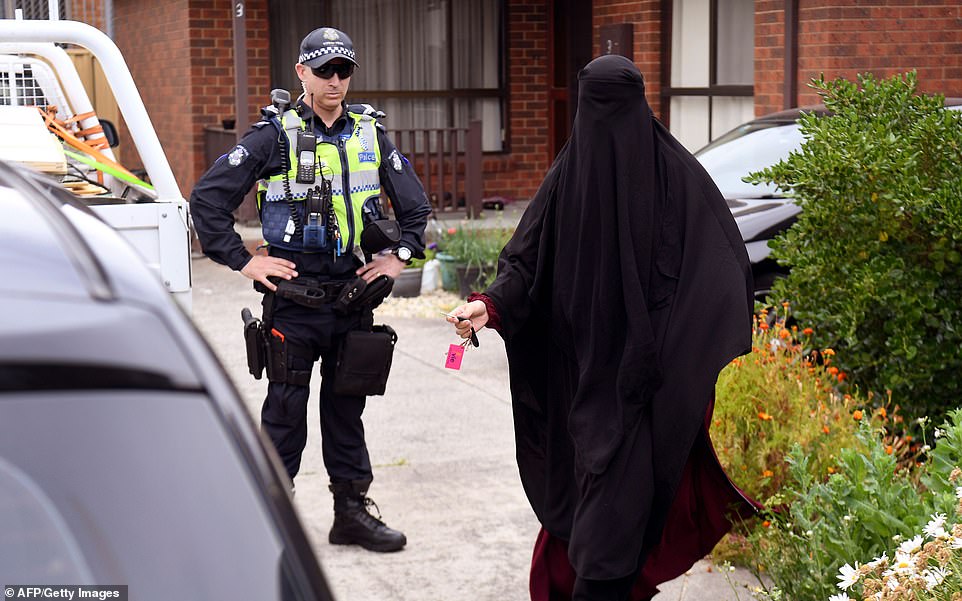 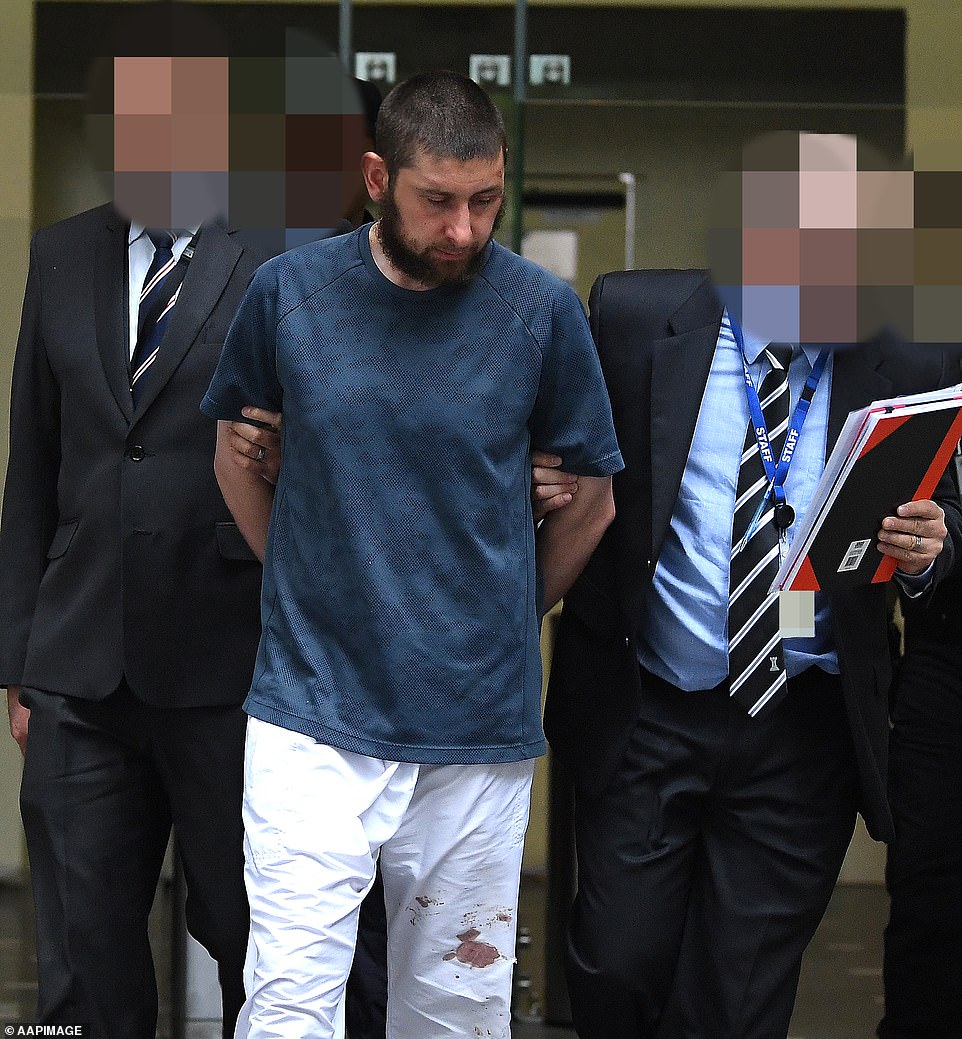 Ertunc Eriklioglu, 30, was later charged with terrorism crimes and will face court on Tuesday afternoon. He appeared to have blood splattered on his trousers 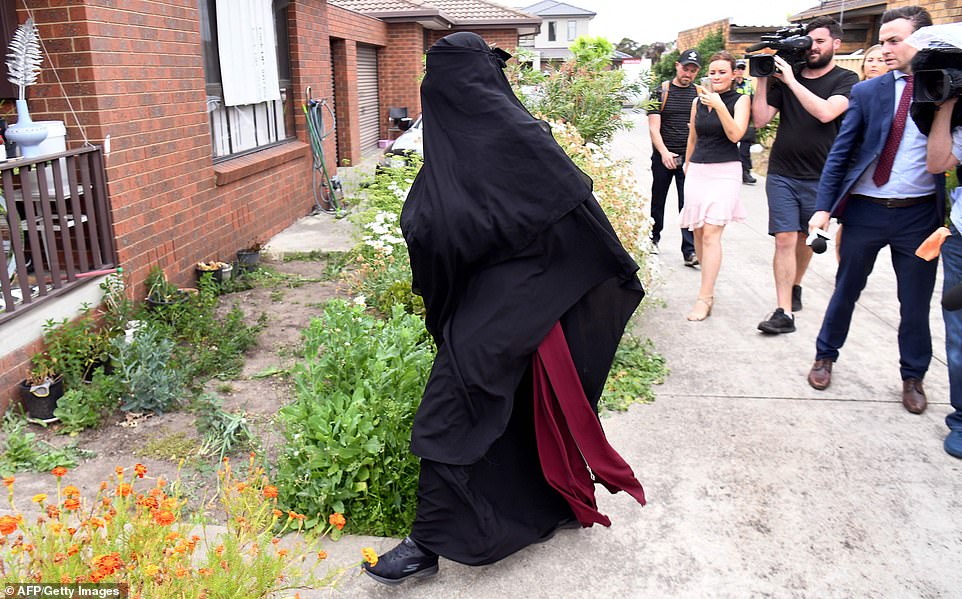 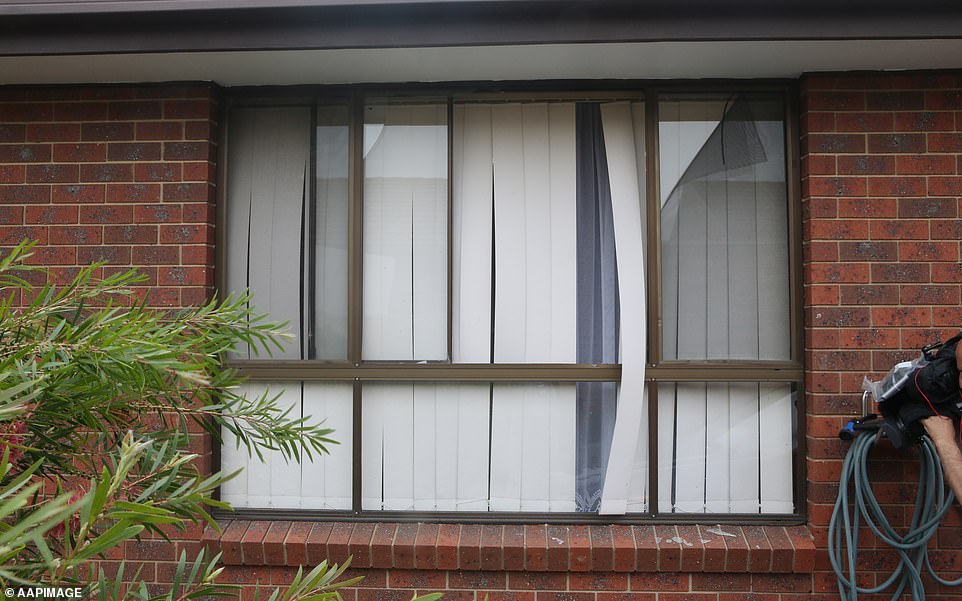 The others arrested were Hanifi Halis, 21, a mechanic from Greenvale who neighbours said wore a uniform with a Toyota badge on it, and Samed Eriklioglu, 26, from Campbellfield.

All three were hours later charged with one count each of act in preparation for, or planning of terrorist acts and will face Melbourne Magistrates Court on Tuesday, the AFP said.

It’s alleged that the trio were planning to massacre people in a crowded place in Melbourne, potentially using a semi-automatic rifle.

All men are Australian but have Turkish backgrounds. Their passports were cancelled earlier this year.

Police allege the trio were planning an ISIS-inspired terror attack in a public place and had been trying to get their hands on a semi-automatic rifle.

The trio, who may have attended the same Islamic centre as the Bourke Street attacker, wanted to ‘kill a maximum amount of people as possible’ in a crowded place, police alleged. 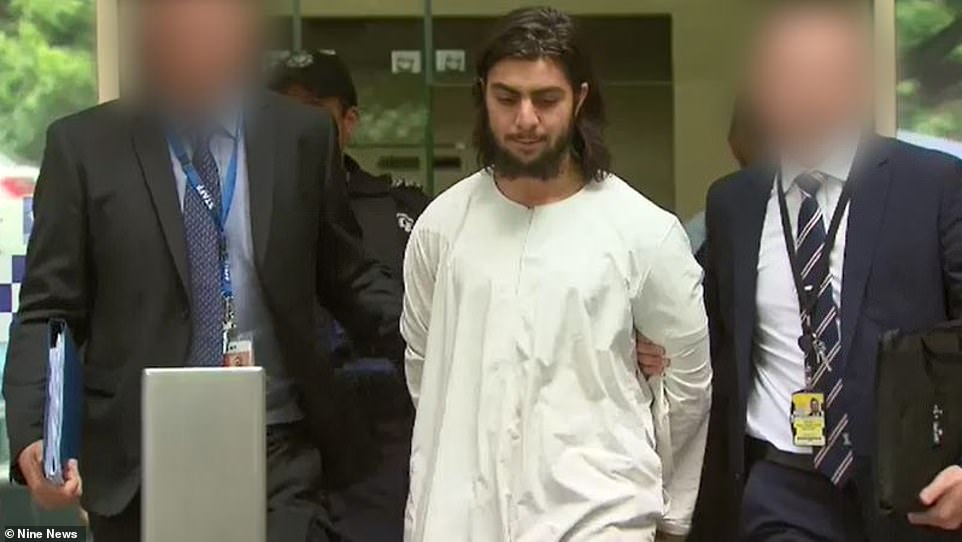 Hanifi Halis (pictured), 21, of Greenvale, has since been charged with one count of act in preparation for, or planning of terrorist acts, according to a statement by Victoria Police 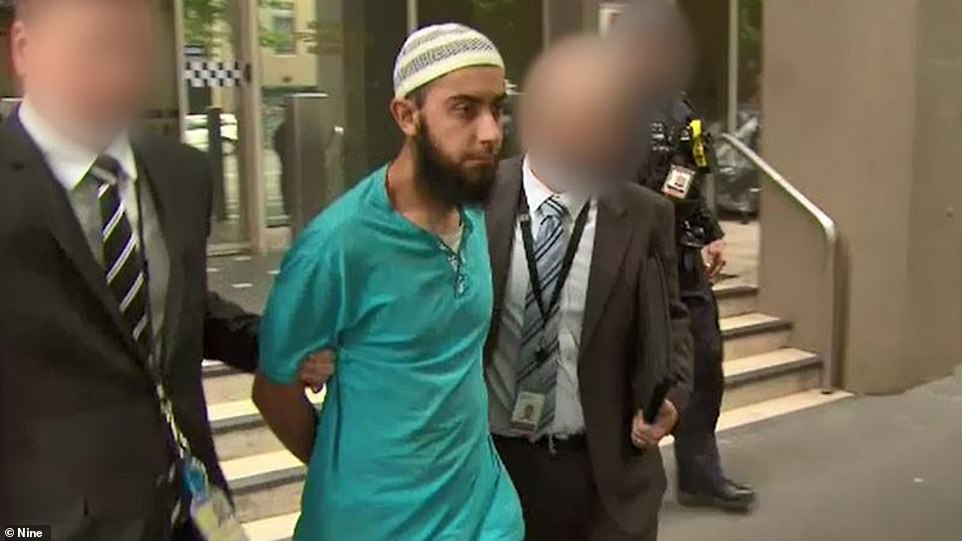 Halis and Samed Eriklioglu, 26, (pictured) were hours later charged with one count each of act in preparation for, or planning of terrorist acts 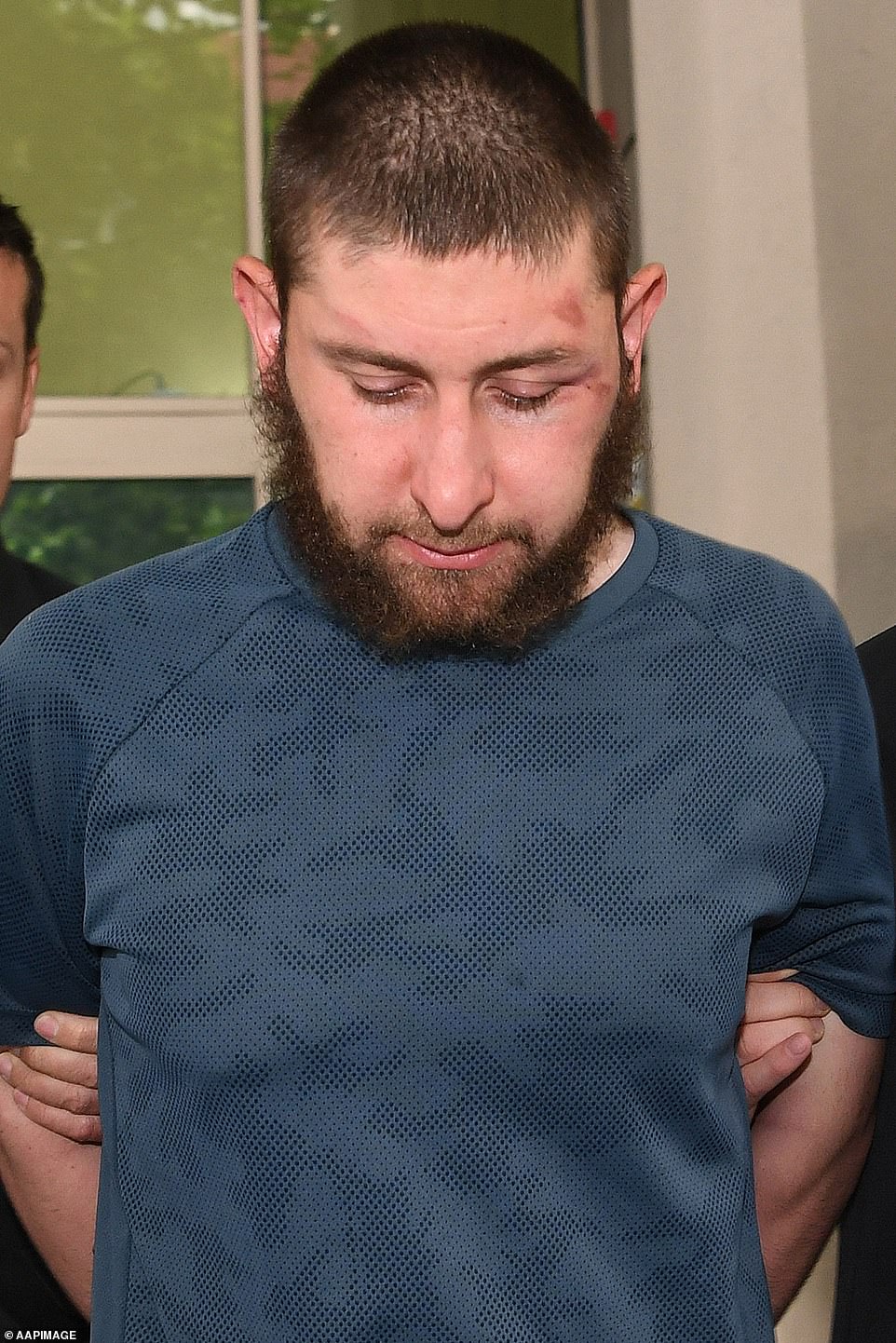 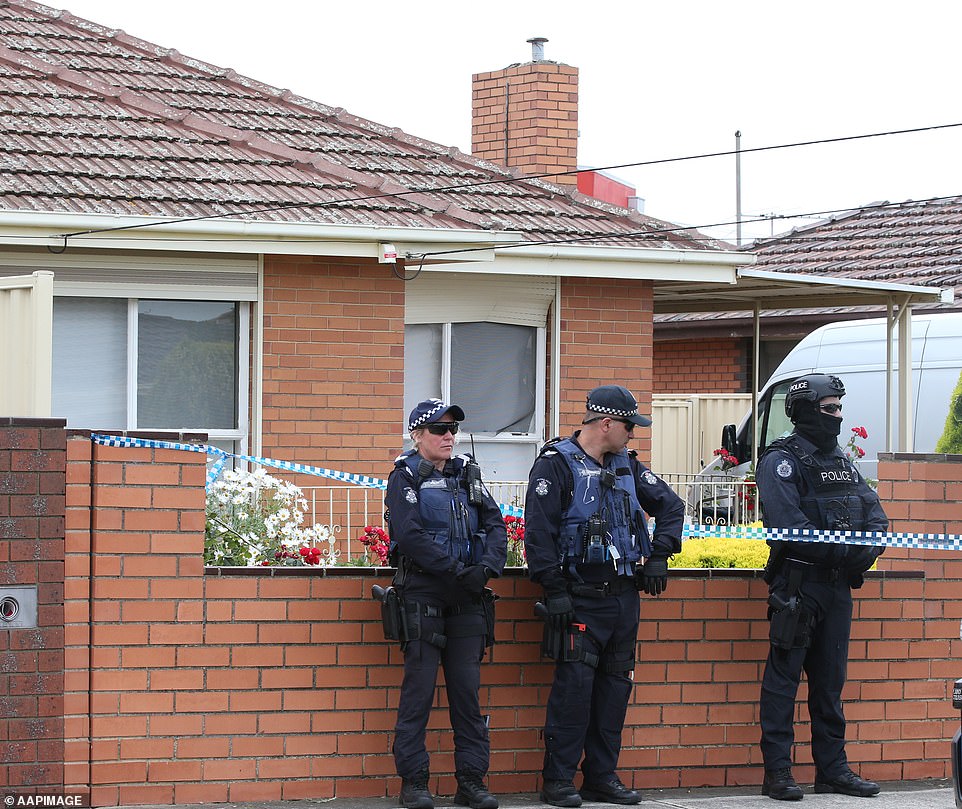 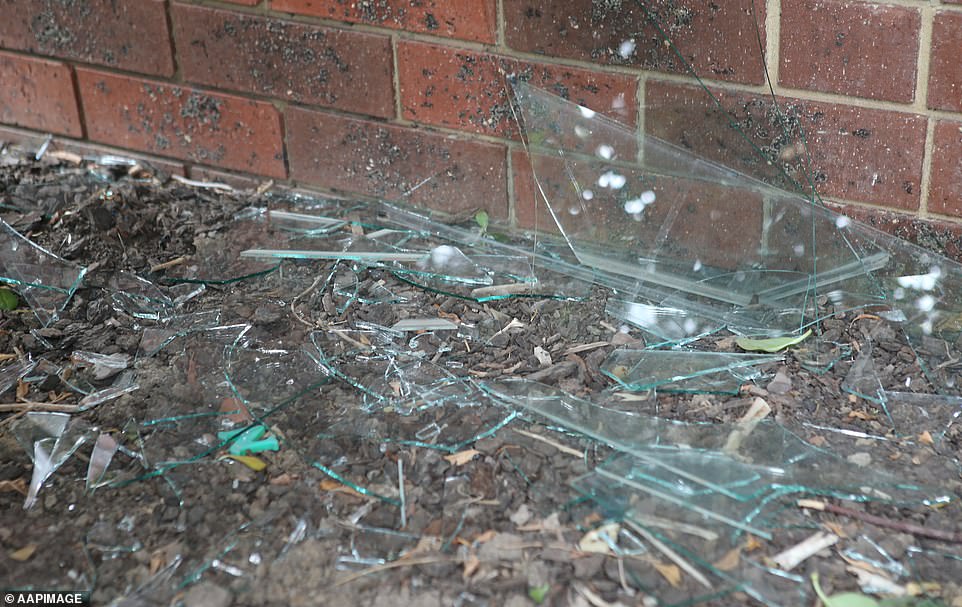 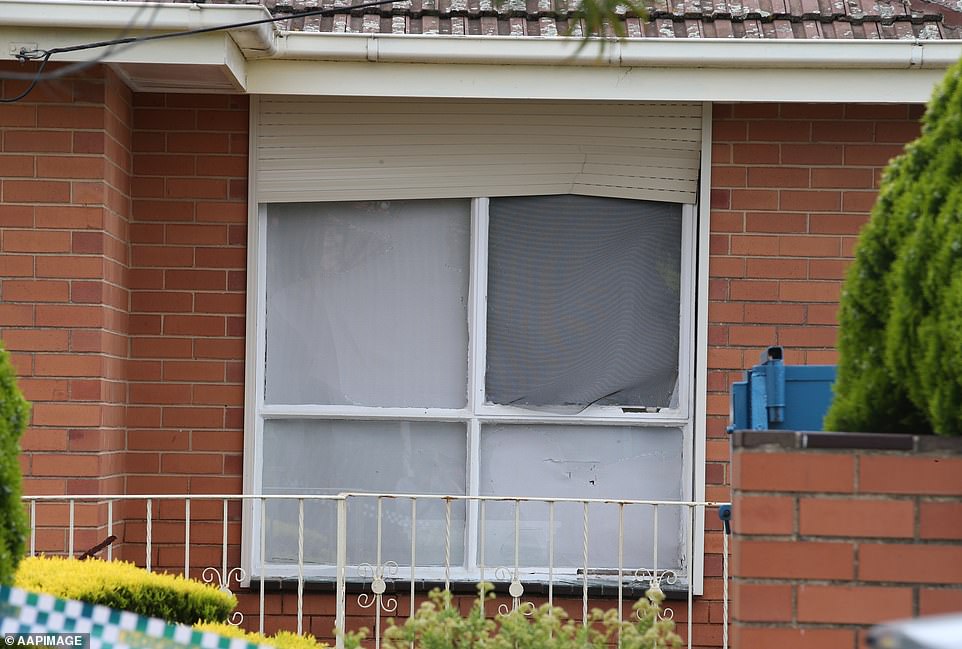 The residents, who did not wish to be named, said they knew the alleged terrorist by the name Arcunc and believed his brother to be named Abdul.

The family is believed to have lived at the Dallas unit for about three years and police confirmed his family had no involvement in the alleged plot.

One neighbour said they noticed a change in the woman’s husband a year ago when he and a group of friends stop visiting the nearby mosque and started praying in his garage.

‘He keeps to himself. He doesn’t speak to any of us. We thought it was strange that he was praying in the garage,’ she said.

Neighbours thought the practice unusual, but never suspected he was allegedly involved in a terrorist plot.

‘I don’t really see him much but I don’t talk with him ever. I’m friends with his wife – she’s just had a baby not long ago so I feel really bad for her. 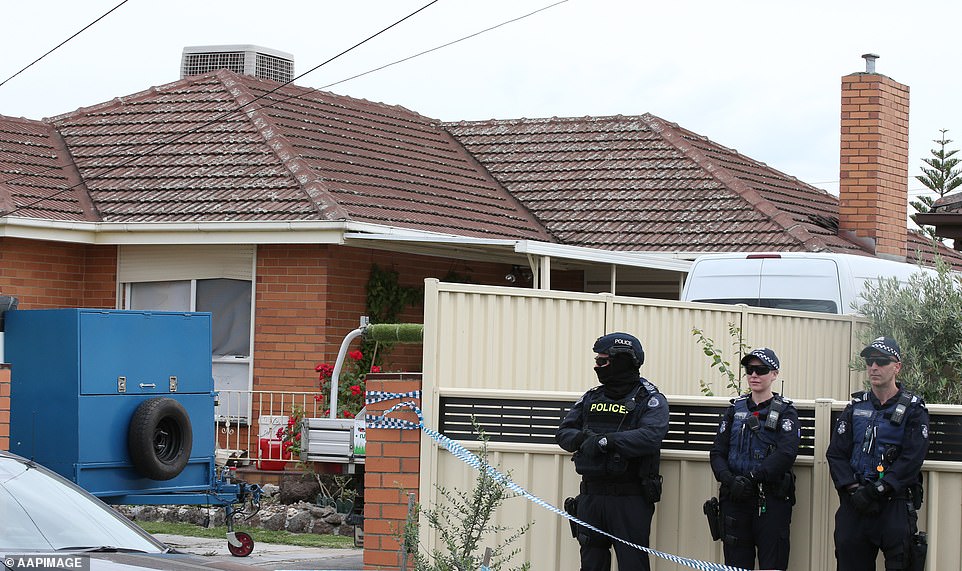 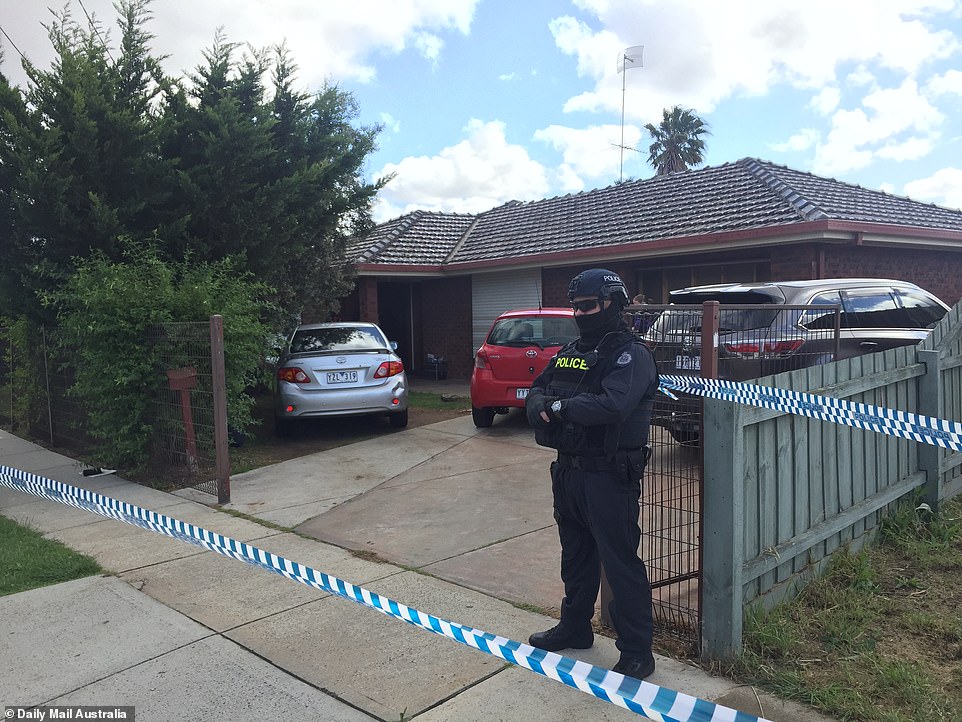 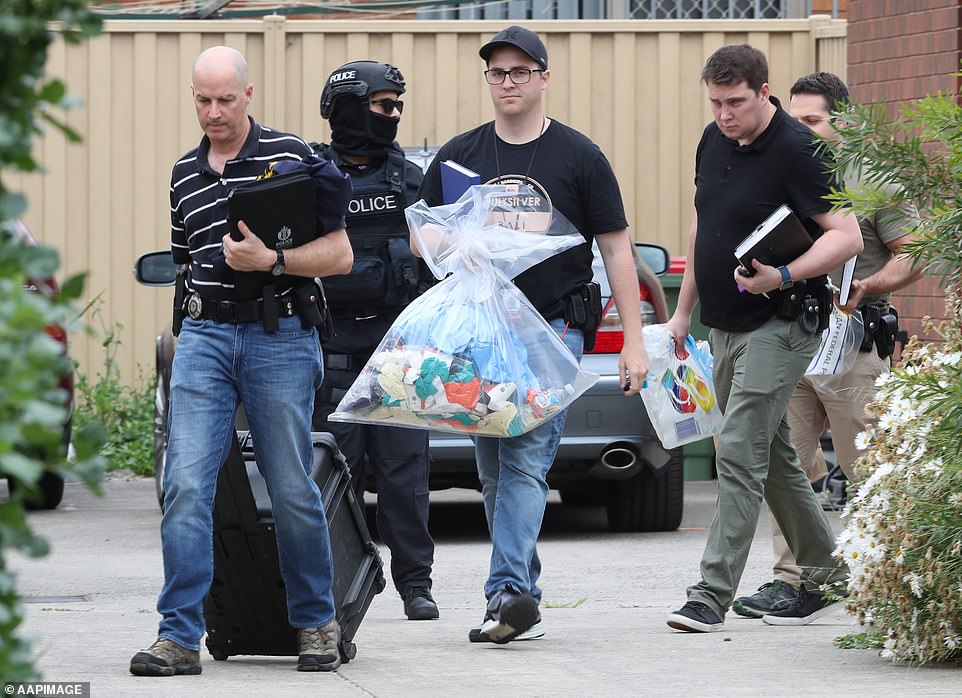 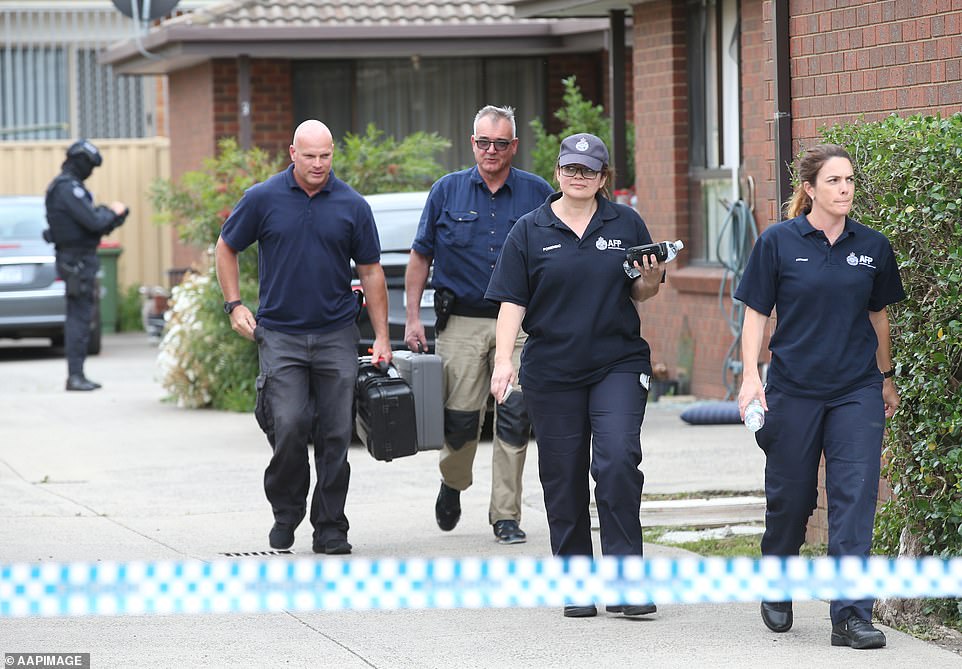 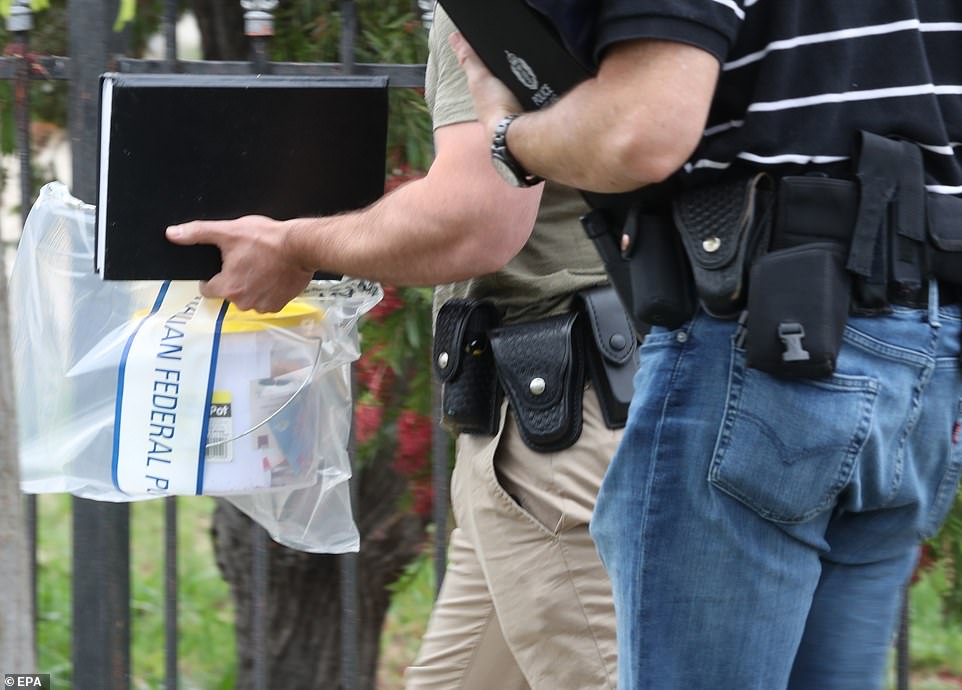 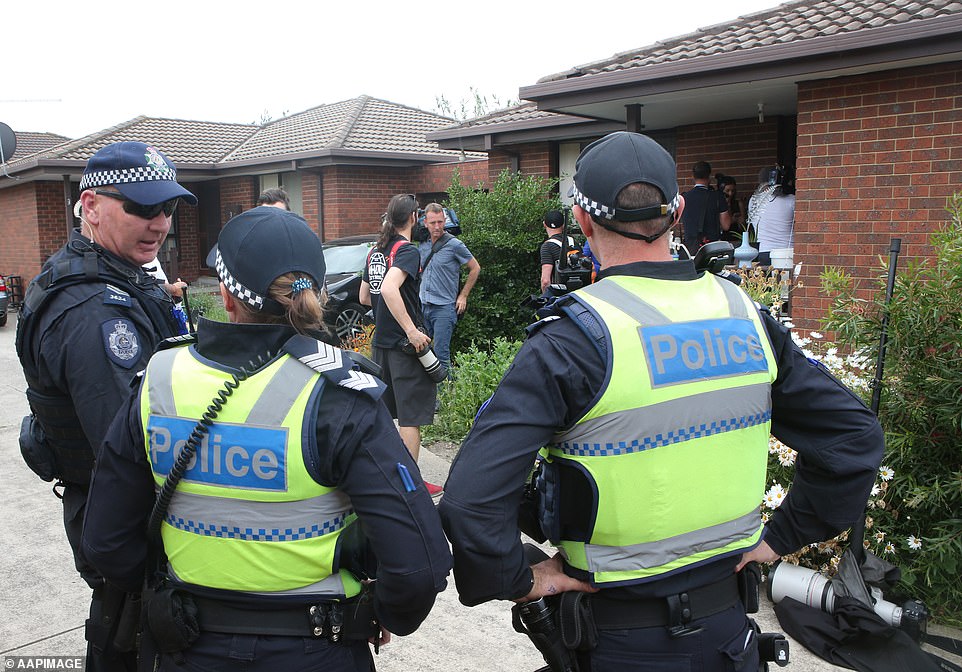 The neighbour said her friend was ‘distraught’ over the allegations against her husband.

‘I would suspect she doesn’t know anything about it because I’m friends with her – our kids play together and I never suspected any of this,’ she said.

A woman believed to be the wife of Ertunc Eriklioglu said she knew nothing of the alleged plot.

‘Go and ask him yourself,’ she told a media pack perched outside her door in Dallas, in Melbourne northwest.

The young couple is believed to have had their second child only weeks ago.

The woman refused to confirm she was the man’s wife, but police said only his wife and children remained in the Dallas home. 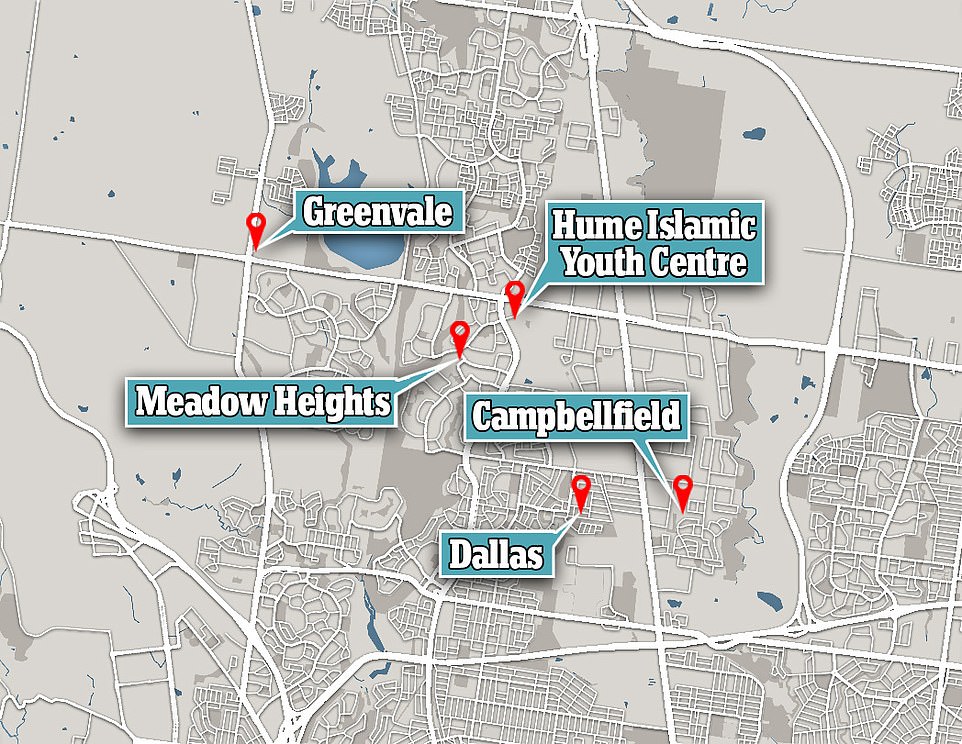 Police arrested a 30-year-old from Dallas, a 26-year-old from Campbellfield and a 21-year-old from Greenvale in Melbourne’s north west on Tuesday morning. Officers also raided a home in Coolaroo 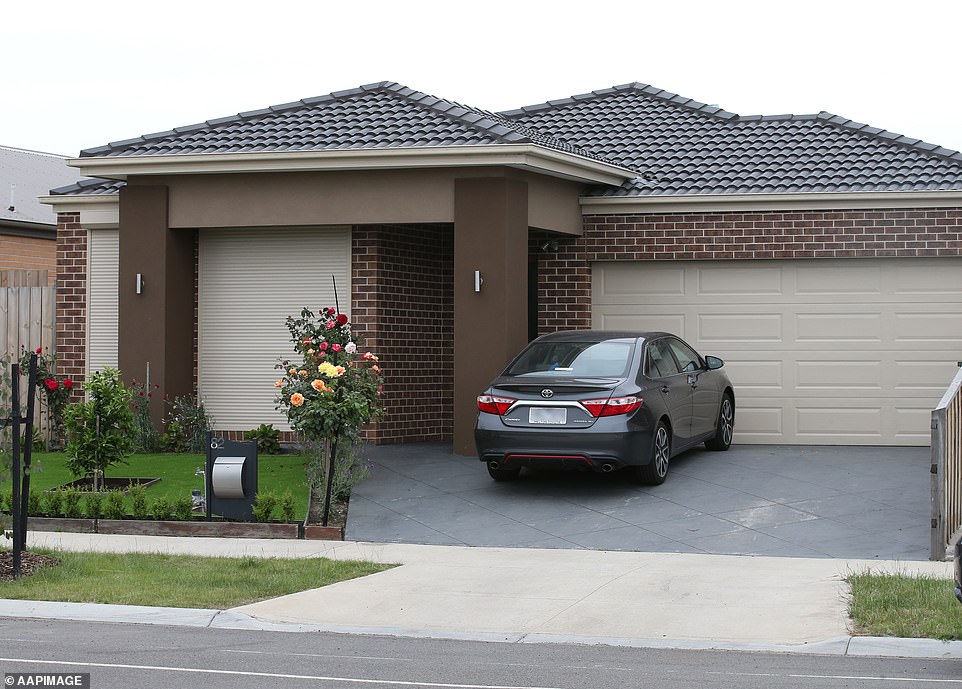 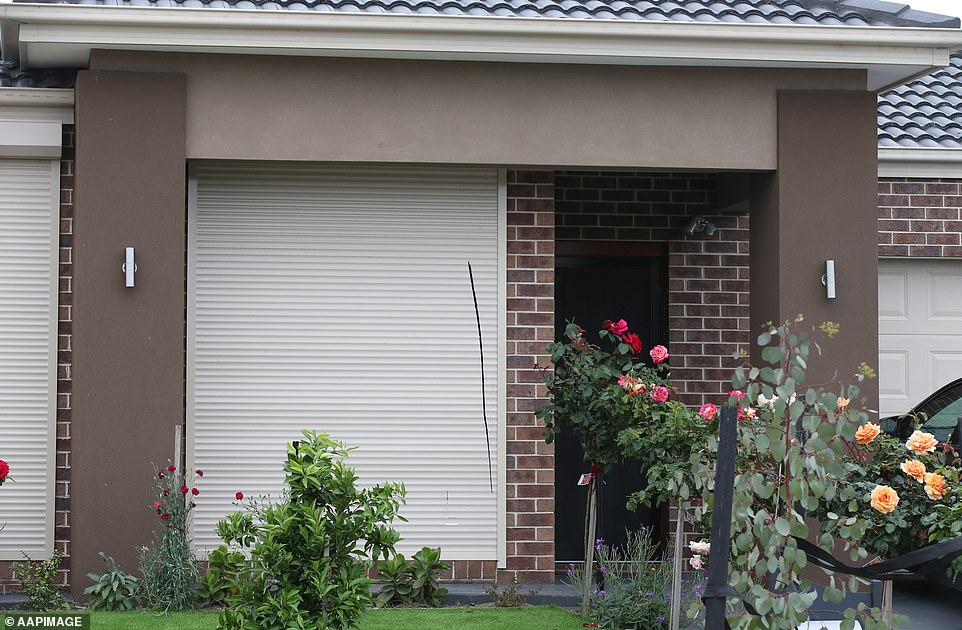 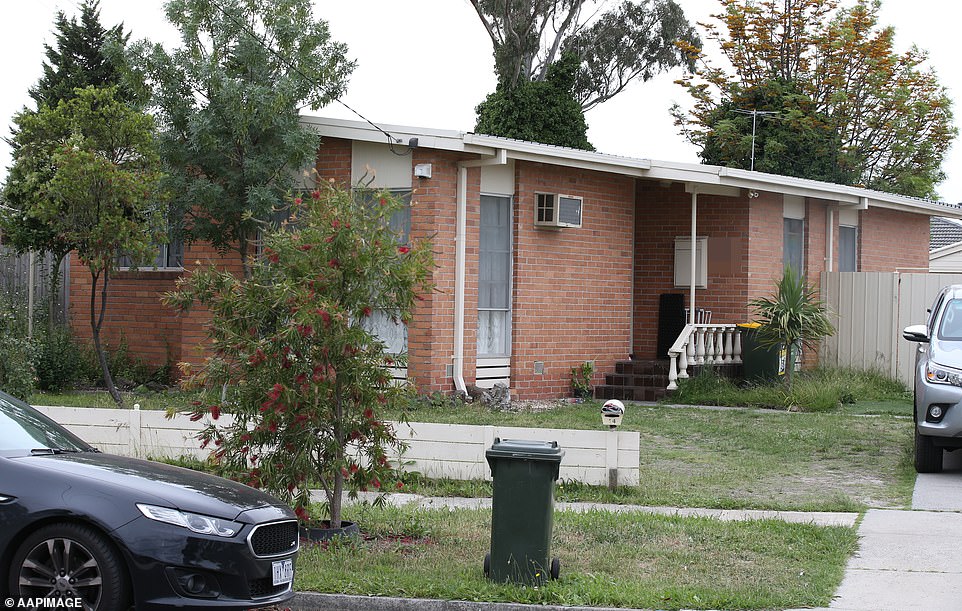 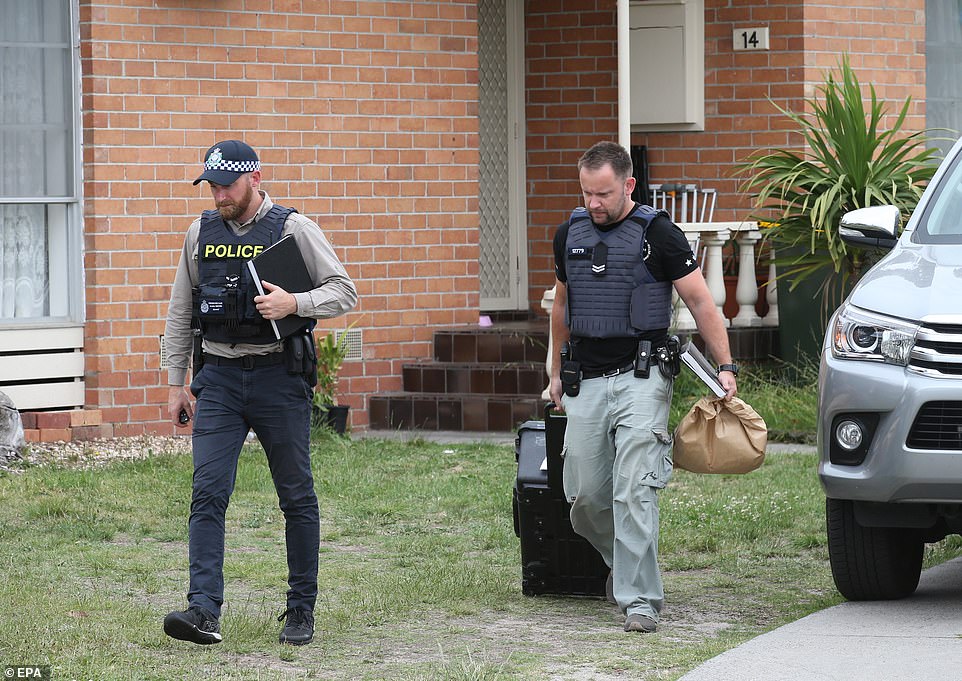 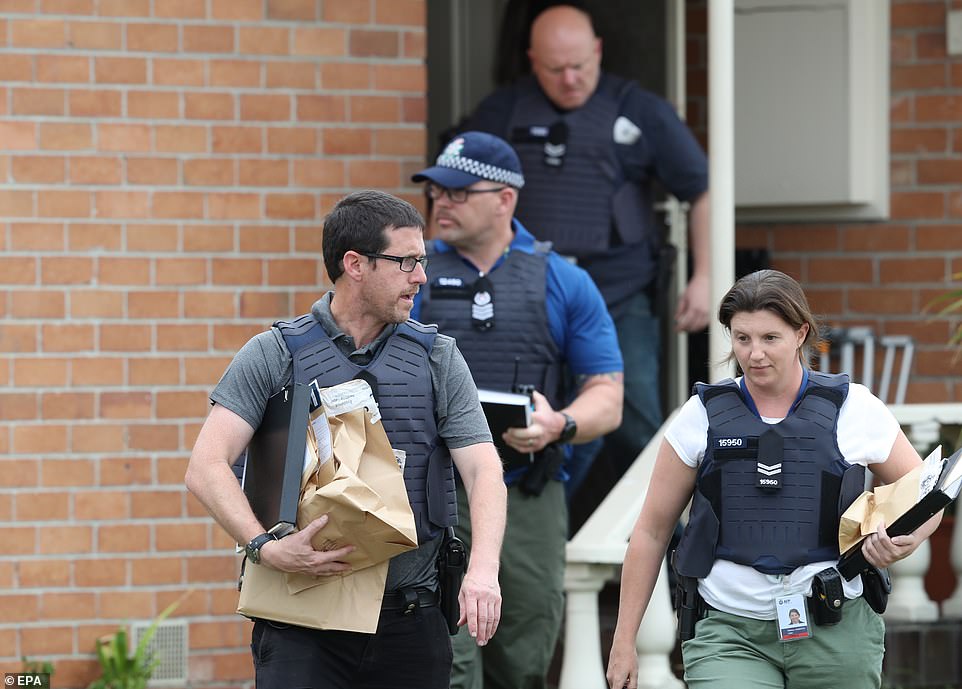 It is understood the woman knew absolutely nothing about the planned attack and has co-operated fully with police.

‘I don’t know. Leave this house or I’ll call the police,’ she told reporters.

A repairman remains at the Dallas property where police appeared to have smashed their way in through a window.

Ertunc Eriklioglu allegedly stopped attending his mosque as he got more radicalised and created his own place of prayer in the garage in his backyard.

Armagan Eriklioglu, father of the two brothers, insisted his sons were innocent and never showed any signs of being radicalised.

‘They don’t even know how to use a weapon. They’re really polite, they’re not violent or aggressive,’ he said outside his home in Campbellfield, which was raided hours earlier.

‘They were going to travel to Turkey before passports were cancelled. Samed was going with his mother to get married.

‘We haven’t got no weapons, they couldn’t find anything. They’ve just been praying at the mosque, same as me. I listen to the scholars as well.’ 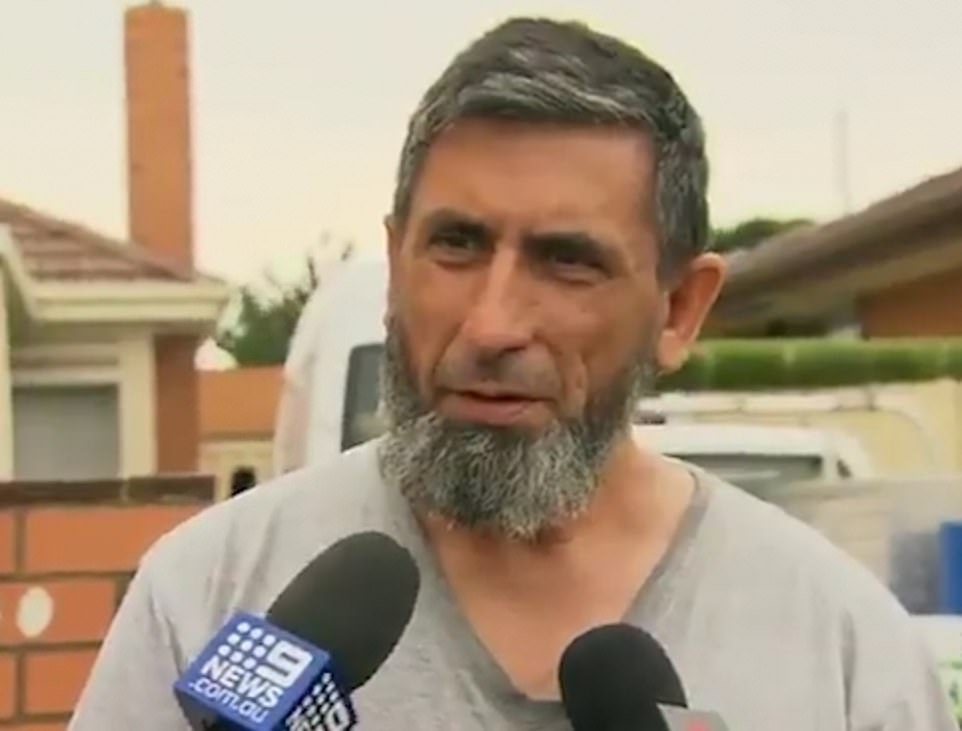 Armagan Eriklioglu, father of the two brothers, insisted his sons were innocent and never showed any signs of being radicalised

When asked if they’d been radicalised by ISIS he said: ‘No, they don’t like Islamic State. They would never attack an Australian, no way.’

Mr Eriklioglu said police grabbed him and pointed guns at his wife, who doesn’t wear a headscarf. ‘They threw me to the ground very hard.’

‘No planning an attack, no way. I’m very sure, I’m with them all the time and in a WhatsApp group chatting with them,’ he said when the police allegations against his sons were put to him.

He said they didn’t always go to the same mosque and he often prayed with at his Dallas home.

‘I wanted to come out here and say it’s not true,’ he said. ‘I don’t know where [police] got this information from.’

Mr Eriklioglu also claimed ISIS didn’t exist and ‘has been created by the USA’. 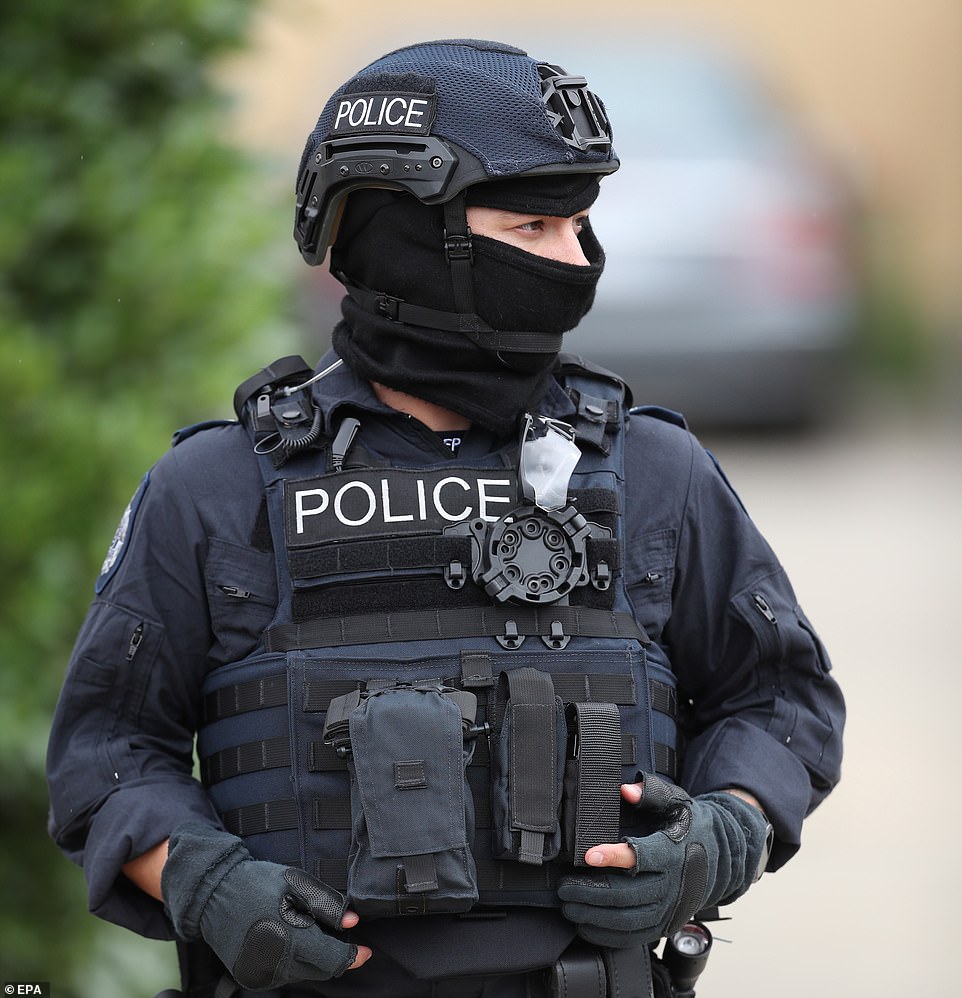 The men were allegedly planning to massacre dozens in a crowded place in Melbourne, although police said a specific location was never finalised.

‘There was a view towards a crowded place, a place where maximum people would be attending, to be able, to kill, we allege, as a maximum amount of people as possible,’ Victoria Police Chief Commissioner Graham Ashton said.

‘I believe, over more recent days, attempts have been made to source a 0.22 semi-automatic rifle to assist with the carrying out of that terrorism event.

‘Fortunately, this is an event we’ve been able to deal with in relation to our counter-terrorism operation and therefore have been in a position to intercept it prior to it being completed.’

‘Unfortunately the ISIS propaganda machine and that of Al Qaida promotes this side of activity,’ he said.

‘So when people are prevented from travelling or it’s difficult to get to the conflict zone, then often the view will be I’ll change tactic and commit and act in the country in which I live.’