Australia’s Prime Minister Scott Morrison has been refreshingly forthright in confronting the jihad problem in Australia. As Jihad Watch recently reported, he has been mulling plans to strip jihadis of citizenship and expel them from the country. Australia has also rejected the UN Migration Pact, which virtually puts the control of the borders of sovereign Western countries into the hands of the globalist UN.

Morrison has enraged Muslim leaders by calling for them to be “proactive” against “extremist Islam.” No matter what Western leaders do or say in good faith to stymie the spread of the jihad ideology in their countries, they will be attacked by leading Muslim groups, and this is very telling. Morrison reached out to Muslim communities and encouraged them “all over Australia to raise their alertness and awareness level. He pointed out that Muslims should be more concerned as it is their community which is being infiltrated and these activities present a potential risk to the safety of all Australians and also of their own children.” His outreach was met with scorn, as these groups have no interest in democratic freedoms or the laws of Australia. Their priority is sharia supremacy.

Western countries are being Islamized. Western leaders need to recognize the need to take full responsibility for their own democracies, and must confront the jihadist imperative to subjugate them. For starters, blasphemy laws do not belong in Western societies, yet many Muslims in the West are advocating for the implementation of measures that will criminalize perceived insults to their religion. Furthermore, they are easily insulted and enraged whenever confronted about obvious threats and abuses that are sanctioned by their religion.

Right after being sworn in, Pakistani Prime Minister Imran Khan vowed to take the matter of blasphemy to the UN, “saying that few in the West understand the pain caused to Muslims” when Muhammad is insulted. This may be true, but hurt feelings should not be prioritized over the freedom of speech. Pakistan is, of course, well known as for its cruel enforcement of Islamic blasphemy laws.

Sharia, which is supremacist, is regarded as divine law in Islam, and stipulates that Islam must not be criticized. Its adherents must also not be criticized; critics are branded “Islamophobic,” a label that has become a favorite of Leftists. When Morrison reached out to Muslim communities for help, they resorted to the victimology subterfuge:

Australian Grand Mufti Ibrahim Abu Mohamed and “a group of other senior Muslim figures” said that Morrison’s remarks “which infer that the community is collectively culpable for the criminal actions of individuals and should be doing more to prevent such acts of violence.”

Many mosques on Western soil are havens of the jihad ideology. They need to be monitored for supremacist and jihadist messages in their sermons, and shut down if found to be preaching such.

While Morrison “wants Muslim leaders to be more aggressive in preventing terrorism,” he and other leaders need to be more aggressive in preventing terrorism themselves, without apology. There needs to be an awakening to the realization that whatever infidels attempt to do to effectively stop the jihad threat, and no matter how benign their intentions, they will be met with hostility from Muslim leaders. Morrison should be commended for his recognition of the jihad threat. Many (although not all) Muslim communities are part of the problem and shelter jihadists, while screaming “Islamophobia” at every turn.

The PM claimed in a series of interviews the Bourke Street attack happened only due to the presence of Islamic extremism in Australia. He described radical Islam as a “vile presence.” Morrison dismissed suggestions which stated mental health problems of the perpetrator to be the issue, describing this explanation as a “lame excuse.”

Morrison is correct. The West is in a war for its freedoms against a “vile presence.” The House of War is being subjugated by the House of Islam. The kindness and welcome that Westerners have offered to Muslims are not generally being reciprocated. 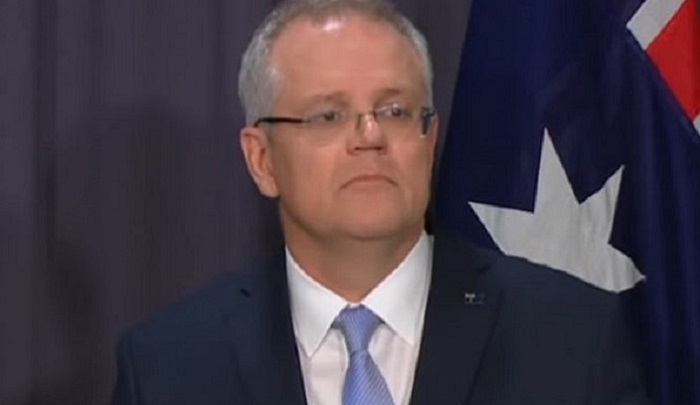 Prime Minister Scott Morrison of Australia wants his country’s Muslim community to be “proactive” when it comes to tackling terror attacks. The reasoning of the PM is that in multiple cases, Muslim community leaders and imams have knowledge of who has infiltrated and is radicalizing vulnerable community members. According to Morrison the only way forward to stop such attacks is community engagement. He made his statements in the backdrop of Hassan Khalif Shire Ali, an Australian citizen of Somali origin killing one fellow Australian and injuring others on Melbourne’s Bourke Street.

The PM claimed in a series of interviews the Bourke Street attack happened only due to the presence of Islamic extremism in Australia. He described radical Islam as a “vile presence.” Morrison dismissed suggestions which stated mental health problems of the perpetrator to be the issue, describing this explanation as a “lame excuse.” He doubled down on his previous requests to Muslim leaders to be more vigilant, saying it will not be possible for the police and other security agencies to monitor every person and it is thus the responsibility of the communities to spot those “infiltrators” engaged in spreading extremism. When Morrison was questioned as to why Ali was not considered a threat even when the Australian Government canceled his passport in 2015 due to his stated wish to fight for Islamic State, the PM said there were 400 more important ASIO investigations, and not all people who were once investigated could be subjected to round the clock observation. He said approximately 230 individuals were not allowed to enjoy a valid passport.

When the Australian Prime Minister was asked if his country’s people would now be forced to live with this new normal, he replied saying the only option possible to thwart these kind of terror attacks is community bonding. Morrison also encouraged Muslim communities all over Australia to raise their alertness and awareness level. He pointed out that Muslims should be more concerned as it is their community which is being infiltrated….

3 thoughts on “Mohammedans declare ScoMo an “enemy of Islam””