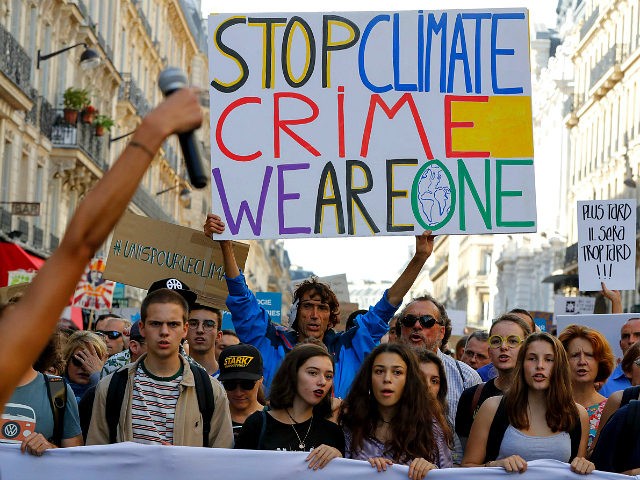 Experts and scientists joined the Heartland Institute’s excursion to Katowice, Poland, this week for the United Nations (U.N.) COP24 conference on climate change. But the free-market think tank set up shop a few blocks away from the conference site so they could make the case against the U.N.’s agenda to fight so-called manmade climate change.

James Taylor, senior fellow for environment and climate policy at the Illinois-based institute, welcomed those watching the four-hour live stream climate and policy briefing and said it was important to be in Poland to push back on a “gathering of the world’s global collectivists, the climate totalitarians, the global ruling class elites.”

Taylor said the institute’s goal was to counter the U.N.’s theory about manmade climate change with some cold, hard facts, which speakers discussed and showed in the form of charts and graphs, including some of the U.N.’s own findings.

“It’s ironic that in today’s world that if you test an alarmist’s theory or prediction and if you present real-world evidence that contradicts it you’ll be called a denier,” Taylor said. “You’ll be told that you’re attacking science.”

Taylor said the group was armed with plenty of scientific facts, including those to counter the U.N. and other environmental activists claims that wildfires, hurricanes, and droughts are linked to manmade climate change.

In 2017, for example, the federal government said, the “drought in the U.S. fell to a record low this week, with just 6.1 percent of the lower 48 states currently experienced such dry conditions,” USA Today reported.

As for a U.N. official’s claim at the conference that 20 of the last 22 years are the hottest on record, Taylor said that is because the U.N. is using data only back to the start of the 20th century instead of going back thousands of years where you can find time periods that were warmer than in recent years.

Taylor had a copy of a Berkeley Earth map that shows the United States has good air quality across the country compared with some nations with air that is classified as “very unhealthy” or “hazardous.”

The United States has mitigated how to deal with pollution very successfully, Taylor said.

“The world should be beating a path to the door of the United States, where not only are emissions going down, but freedom is being protected and sustained, energy is affordable and abundant, and the economy prospers,” Taylor said. “The human condition is lifted up without the restrictions the United Nations seeks to impose on the little people — you and me.”

Horst-Joachim Lüdecke, a spokesman for the European Institute for Climate and Energy (EIKE), said climate change zealots had created a “new religion.”

“The religion of manmade global warming is not supposed to be questioned,” Ludecke said at the press briefing. “Instead of this, they propagate worldwide action for establishing extremely expensive programs to reduce C02 emissions.”

“There is no scientific proof” of manmade climate change, Ludecke said, “It is only a hypothesis.”

“Therefore there is no need for any policy for reducing, regulating, or taxing CO2,” Ludecke said.

Dennis Avery, director of the Center for Global Food Issues, said mankind had improved the environment in many ways.

“Humans didn’t find a safe world and make it dangerous,” Avery said in a preview of his presentation on Tuesday. “We found a dangerous world and made it safer.”

“‘Natural’ is not necessarily better,” Avery said. “The Greens are offering no viable reason why famines will dominate the coming centuries since global crop yields are continuing to rise.”