There are riots in socialist France because of radical leftist fuel taxes.

America is booming, Europe is burning.

They want to cover up the middle class rebellion against cultural Marxism.

“We want Trump” being chanted through the streets of Paris

This is an abomination. High treason by an unelected elite of traitors.

Here’s what Australia signed up to:

20. Signatories to the Paris Agreement, who have also joined the Hamburg Action Plan, reaffirm that the Paris Agreement is irreversible and commit to its full implementation, reflecting common but differentiated responsibilities and respective capabilities, in light of different national circumstances. We will continue to tackle climate change, while promoting sustainable development and economic growth.

BRUSSELS IN FLAMES: French riots spread to Belgium – HUNDREDS go on rampage at home of EU

Hundreds of activists made Belgium’s political landmarks their target, marching between landmarks amid clouds of smoke from firecrackers and smoke bombs, as they were stalked by dozens of baton-wielding riot officers ready to pounce. Protesters descended on the European Commission’s Berlaymont headquarters, the heart of EU decision-making, as they created Belgium’s own ‘yellow jacket’ campaign against rising fuel prices and the cost of living. The EU Commission was forced to temporarily shut its doors as the building’s security guards refused to let anyone in or out while protesters marched passed.

Jean Bricmont, a French writer and political commentator, told RT there is not much that French authorities could do to defuse tensions as Paris “has to obey the orders from the European Commission.” France is a slave state.

A lone ‘yellow jacket’ remained stationed outside the bolted doors, insisting the Berlaymont was now “closed for the day”.

Another protester, who wanted to remain anonymous amid scenes of violence, told Express.co.uk: “We are protesting against the raising cost of petrol, living and high tax.

“It’s the same as France and Paris and maybe later on in Holland and maybe in England.”

At least two police vans were destroyed in what started as a peaceful but unauthorised demonstration descended into violence.

Police made dozens of arrests after protestors with their faces covered by masks or hoods tried to storm through police lines. 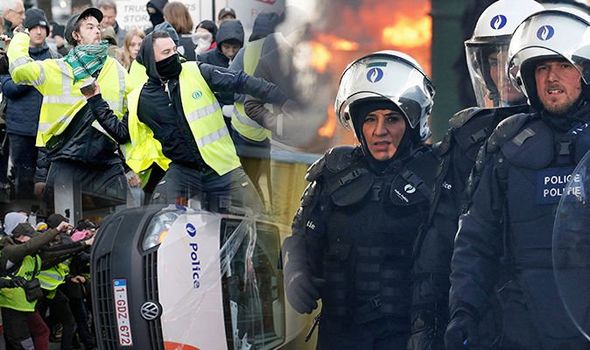 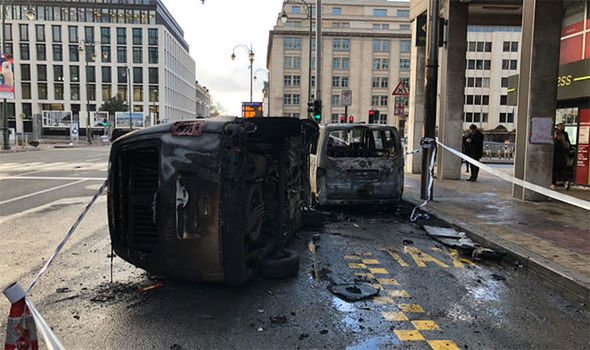 At least two police vans were destroyed in the protests (Image: JOE BARNES)

Belgium’s ‘yellow jacket’ movement are hoping to inspire similar scenes across Europe, with London a particular hotspot for potential violence.

They use social media to spread their message, and claim to have already had their Facebook event page shut down for the Brussels march.

Riot police came under attack by a small breakaway faction as they dispersed peaceful ‘yellow jackets’ away from the EU Commission’s headquarters.

A dozen youths, dressed in black hoodies without the high visibility jackets, launched rocks at the police who proceeded to give chase down a side street. 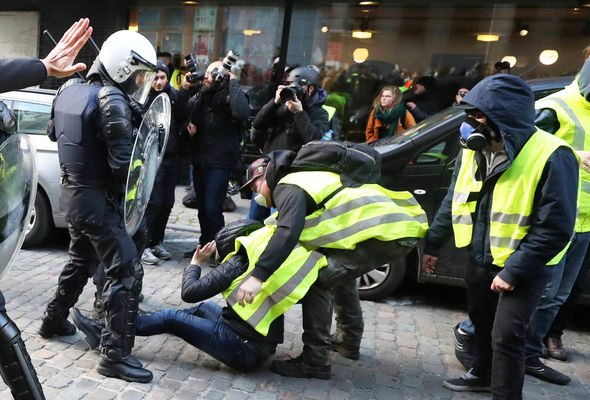 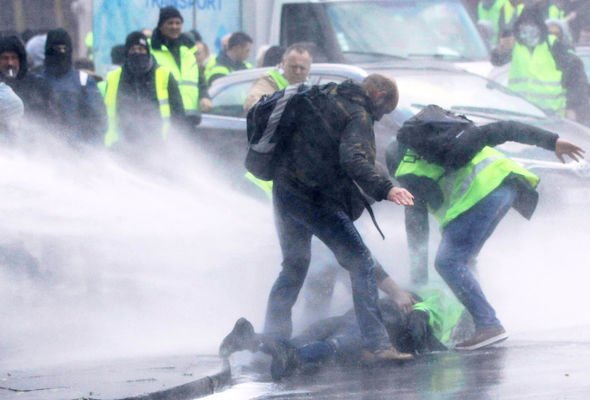 Shop owners ran to their doors amid fears they could become innocent victims of clashes between police and the mob.

Peaceful protesters continued on their march away from the Commission with their hands held aloft above their heads as they passed awaiting riot police.

Crowds demanded the resignation of the PM as they chanted “Michel, resign!”

Mr Michel is a liberal ally of Macron, who voiced sympathy for people’s troubles on Thursday. But he added: “Money doesn’t fall from the sky.”

His centre-right coalition faces an election in May. 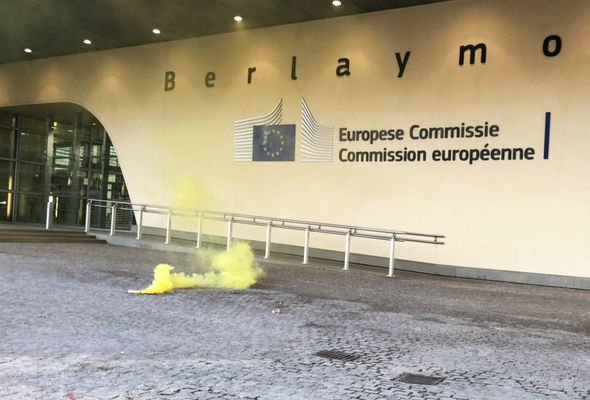 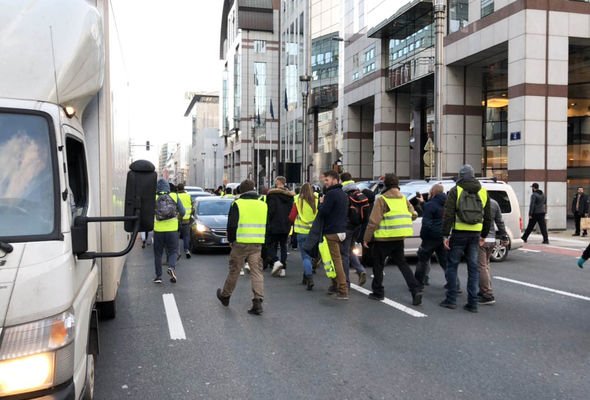 A tweet from the Belgian leader said: “No impunity for unacceptable violence in Brussels. Those who came to smash and loot must be punished.”

Protests in Belgium, notably around fuel depots in the French-speaking south, have been inspired by the yellow vest – or “gilet jaune” – actions in France.

The yellow vests staged demonstrations on the Champs-Élysées last week in protest at increases in fuel duty imposed by President Emmanuel Macron’s government as part of efforts to reduce emissions causing global warming.