This pope is a dangerous lunatic. He works for the other side.

The “compact for a safe orderly migration” is a Communist wet dream. Communist rulers dream of replacing their populations with unassimilable third world savages that will support them. Europeans reject this pact; it’s spawning protests all across the EUSSR. A group of senior military leaders signed a letter to France’s Macron warning him that his support of this thing is treasonous to France. 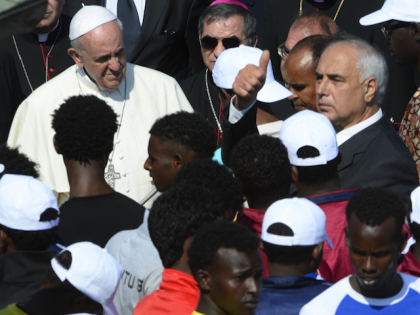 They were pushed back by security guards, but later returned with more than 200 other migrants, illegal workers, and asylum seekers, mostly from sub-Saharan Africa, as well as open borders activists who coordinated the action, Le Parisien reports. (More here)

Geert Wilders Introduces Bill to Ban Islam in The Netherlands

Islam is not a religion or a philosophy of life but a violent, totalitarian ideology.

Clemson Prof in NYT: Human Extinction ‘Might Just Be a Good Thing,’ Because Global Warming

Gaia worship is a form of collective insanity.

An opinion piece published in the New York Times Monday argues the extinction of human beings could be a “good thing” due to humanity’s contribution to climate change, among other reasons.

The GCM provides “a framework for the whole international community,” the pope toldthe 25,000 pilgrims and tourists in Saint Peter’s Square, before asking for prayers that this agreement will lead all nations to work with “responsibility, solidarity, and compassion toward those who, for various reasons, have left their country.”

Francis has made the immigration question a pillar of his pontificate, urging nations to be as welcoming as possible toward migrants of all sorts.

Earlier this month, the Vatican’s department for Migration and Refugees issued a statement praising the GCM, saying that it stressed “greater cooperation and responsibility sharing.”

“The Holy See will join many other governments of the world to celebrate the adoption of this pact, the first international agreement on migration at the global level,” the text stated.

It further noted that Pope Francis’s approach to migration, summed up in the four verbs “to accept, protect, promote and integrate,” was developed into 20 action points by the Holy See’s Migrants and Refugees Section.

“Today we are happy to note that many of the principles and measures listed in the 20 Points have been included in the final text of the Pacts, and in particular in 15 of the 23 Goals of the GCM,” the statement declared.

The pope sent the Vatican’s number two man, Secretary of State Cardinal Pietro Parolin, to speak at the Marrakesh meeting, in which the cardinal reiterated the Vatican position that international migration must be governed globally rather than by individual nations.

Implementation of the GCM “will help all Governments, as well as non-governmental entities, including faith-based organizations, collectively to manage migration in a more safe, orderly and regular manner, something no State can achieve alone,” he said.

In his address, the cardinal said that all migrants share the same human rights, “regardless of their status,” a rebuke to those who underscore the difference between legal and illegal immigration.

The Vatican Secretary of State also stressed what he sees as the forced nature of much contemporary migration, as opposed to voluntary migration used to improve one’s circumstances or take advantage of social welfare programs and job opportunities offered by other countries.

The adoption of the GCM “comes at a critical moment in history,” the cardinal said. “Migration has always been a natural response to crises and to the innate desire for greater opportunities, for a fuller life with greater freedom, peace and security. More people are on the move than ever before.”

A number of nations declined to participate in the Marrakesh meeting, including the United States, Israel, Italy, Hungary, Poland, Austria, and Switzerland.

3 thoughts on ““Human Extinction Might Be a Good Thing””