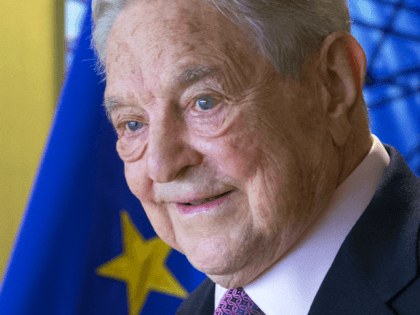 Hungary Hits Back at FT: Soros an ‘Enemy of Democracy,’ Not ‘Person of the Year’

Terrific expose of GetUp! by Brad Norrington in The Australian. This far-Left activist group claims hundreds of thousands of supporters and at the last election commanded $10 million donations. But there are actually just 12 members, including a woman who I still cannot believe was a member of the Australian Press Council.

Terrific expose of GetUp! by Brad Norrington in The Australian.

This far-Left activist group claims hundreds of thousands of supporters and at the last election commanded $10 million in donations.

But is actually has just 12 members, including two founders fron the US, who are responsible to no one.

Its deputy chairman is Carla McGrath, who I still cannot believe was a member of the Australian Press Council. She is an activist who identifies as Torres Strait Islander, which she’s perfectly entitled to do, of course.

But here is someone peddling far-Left identity politics with this huge power in an over-mighty activist group, yet still being handed a position of influence over the media as well until some media outlets rebelled.

But that is a side-issue to the big story here. How can GetUp! claim to be so progressive when it is so authoritarian and unaccountable – virtually a law unto itself? Where’s the internal democracy? Anyhow, the following is tops on the agenda of the left insurrection:

They can’t touch it, hear it, smell it, taste it or see it, but they sure as hell are scared of it:

The latest carbon emissions projections, released by Environment Minister Melissa Price today, predict Australia will reduce its carbon emissions by just 7 per cent on 2005 levels by 2030, well under the promised 26 per cent.

The figure shows Australia is projected to emit 563 megatonnes of carbon dioxide in 2030, with transport and agriculture emissions all continuing to rise.

“This time the government’s own projections shockingly show emissions in 2030 will only be 7 per cent below 2005 levels, well short of the inadequate Liberals’ target of 26-28 per cent cut,” Mr Butler said.

“Confirming the government has no effective climate change policy to bring emissions down in the future, the projections confirm total emissions are projected to grow from today’s levels by over 5 per cent to 2030.”

Labor has vowed to cut carbon emissions by 50 per cent …

Which will smash Australia’s economy.

The Hungarian government has hit out at the Financial Times naming George Soros their “Person of the Year”.

The famous salmon-coloured newspaper, something of a house magazine for the British establishment and financial elite, praised the billionaire currency speculator and convicted insider trader as “the standard bearer of liberal democracy and open society”.

Hungary’s conservative-populist government, which shares a mutual antipathy with the 88-year-old plutocrat on the subject of mass migration — opposed by Budapest, encouraged by Soros — has offered an assessment very much to the contrary, observing: “To the Financial Times, he’s Person of the Year, but to many ordinary citizens, Soros is an enemy of their democracy.”

“To the FT, Soros is a philanthropist, period… the charitable, selfless kind,” wrote government spokesman Dr Zoltán Kovács, describing the financier as the newspaper’s “Achilles’ heel”.

“The FT and much of the liberal, mainstream media just cannot talk in any depth about Soros as the ambitious political actor that he is, a man with an ideologically-driven agenda who puts money behind people and causes that are highly political in nature. He talks and writes candidly himself about his political schemes, plots for which he has zero political mandate,” the Hungarian observed.

It is true that Soros, a Hungarian-born American citizen, has indeed ploughed hundreds of thousands of pounds into the movement to overturn Brexit, and facilitated meetingsbetween powerful EU loyalist politicians and party donors from both the governing Tory party and the Labour opposition at his Chelsea mansion.

Kovács also raised the “tens of millions of [United States Dollars]” which Soros spend “lobbying the U.S. government against Hungary” in 2017, and similar efforts in the EU capital of Brussels.

“Soros and the NGOs that rely on his funding for survival continue to back a radical, open borders, pro-immigration agenda at a time when the migration crisis is putting difficult strains on states to protect Europe’s borders and posing serious security concerns. That stands in stark opposition to what the citizens of Hungary – and those of many European countries – want,” he warned.

“I could list many other examples… his ideological zeal to push for an open society that seeks to undermine national sovereignty and run roughshod over the will of the citizens knows no boundaries.”