Its good to see that -some- Danes are fighting back:

Asylum seekers in Denmark are being shipped to ‘Virus Island,’ a small stony inlet in the Baltic Sea, the right-wing Danish People’s Party said this weekend. “They are unwanted in Denmark, and they will feel that,” said Immigration Minister Inger Stojberg.

At least 100 criminally convicted foreigners and rejected asylum seekers will be transported to ‘Lindholm’ island by a pair of ferries. The 17- acre isle is almost completely deserted with a few stables, some laboratories, and a crematorium center used to study contagious animal diseases.

State officials say they plan to make the process as difficult and expensive as possible in an effort to deter the incoming stream of asylum seekers. Danish lawmakers have approved a government-backed proposal to make citizenship applicants shake hands with the official conducting the naturalization ceremony. The bill has been criticized for discriminating against Muslims.

Critics of the bill argue that it’s aimed at discouraging Muslims from seeking Danish citizenship, calling the proposal discriminatory and describing it as an unnecessary formality.

Want to Become Danish? Then You Must Shake Hands New Law Says 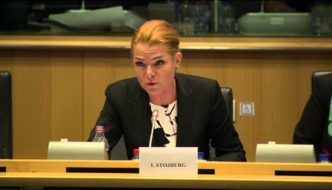 Denmark’s migration minister tells Somali Muslims: “Return home and rebuild the country from which you came”

Denmark has admitted many Muslim migrants, but it is also trying to preserve its culture. It has “introduced a series of integration programmes to stop non-Western migrants ghettosing in the Scandinavian peninsula, including telling migrants in high-ethnic neighbourhoods that their children must attend daycare from the age of one to learn Danish….

Copenhagen Police arrested the man a year ago, saying he was a Syrian who had sought asylum in Sweden.

Denmark to ship rejected migrants to remote island: Will of people or govt going far right?

The changes to the naturalization ceremony, which come into effect on January 1, have been met with strong opposition from the local officials who conduct such proceedings. Some mayors have already said they will ignore the new guidelines. The mayor of the town of Kerteminde in central Denmark has gone so far as to imply that he would rather not show up at work than coerce an applicant to shake his hand.

“Shaking hands does not show if you are integrated or not. I think I will probably find an excuse and the deputy mayor will come to work that day,” Kasper Ejsing Olesen told the Guardian earlier.

The red tape associated with the festive ceremony will cost taxpayers an additional 2,400 kroner ($370) – double the current fee of 1,200 kroner ($183). However, the proponents of the new guidelines believe it’s a fair price to pay to become a Dane.

“When you consider that you are receiving the gift of Danish citizenship, I actually don’t think it’s that expensive. I think it is a tremendously large and valuable gift,” People’s Party spokesman Christian Langball told a local broadcaster in September, as cited by the Local.

Denmark’s Integration Minister Inger Stojberg, a member of the center-right Venstre party, brushed off the criticism, insisting that a handshake is “a completely natural part of the ceremony.”

Stojberg said that a spokesman for Hizb ut-Tahrir, an Islamic group that openly supports the establishment of a caliphate, told her that he would not have become a Danish citizen if the rules applied retroactively.

“I asked him if he would advise his followers in Hizb ut-Tahrir to pass on it, and he said he would. And that’s exactly what we want with the naturalization ceremony,” the minister said, as cited by TV2.